Have a good day!

I have a problem with my AP ePMP 1000 w/GPS. I was upgrade FW from 2.6.2 to 3.2 and after different period it spontaneously downgrade to 2.6.2 I didnt understand what happend. Any idea?? 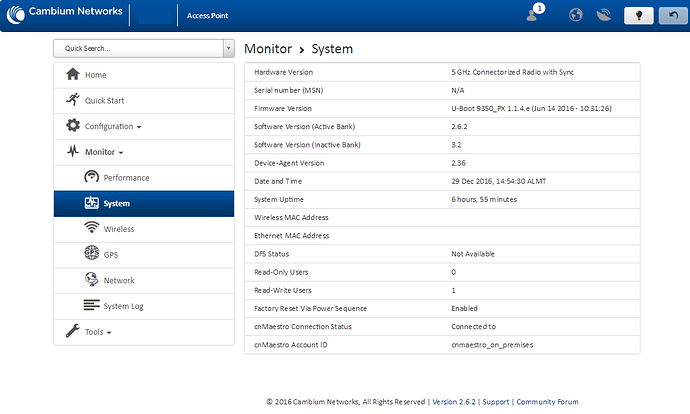 Every ePMP GPS synced device has two banks where FW is stored.

Hmm, it happend on two different stations. FW was downloaded from your site and uploaded successfully with no errors. Also logss how nothing. And how can i start write degug log manually?

Basically on an GPS AP, there are two firmware banks - so if you want them both to be upgraded, you need to upgrade the AP twice to fill both banks with the same version.  If both banks have the same firmware version, then if there is a reboot/crash like this, it'll reboot to the other bank, but the other bank could also have 3.2 in it ifyou wanted to.

To be clear however, this isn't a bug or a problem, it's a feature. :)  When Cambium comes out with new firmware (expecially beta firmware) you can load it and if it's got some problem that renders it unusable, the GPS AP still can boot from the previous version.  You could for example have both 3.1 and 3.2 in the GSP AP, and if there was some critical error in 3.2, it would be able to fall back to 3.1

It happens all the time on my network.  It seems odd that I have such a high percent of software images go bad on my GPS sync radios while I've never had a non-gps unit fail to boot.  I'm fairly sure it's a bug or an issue with the dual bank hardware.  Bottom line is that you have to uprade all of your GPS radios twice until cambium can address it.

Do you see 2.6.2 FW version displayed in footer on UI or in Monitor -> System?
In case you see it in footer, please clear cache in your browser.
Otherwise please check crashlog via CLI:
debug crashlog

Also please note FW will be loaded from inactive bank in case device has been rebooted 9 times in row.
Sometimes it can happens because of power feeding issues.