Industry standards for QoS, and how they apply to DSCP in PTP 650/700

The Internet standards for Quality of Service (QoS) have been specified and re-specified many times since the IP header was standardized in 1981. Back at the beginning of Internet history, RFC 791 defined the second byte of the header as the Type of Service (ToS) field.

Other QoS standards have been introduced and superseded in the years since 1981. Here are the highlights: 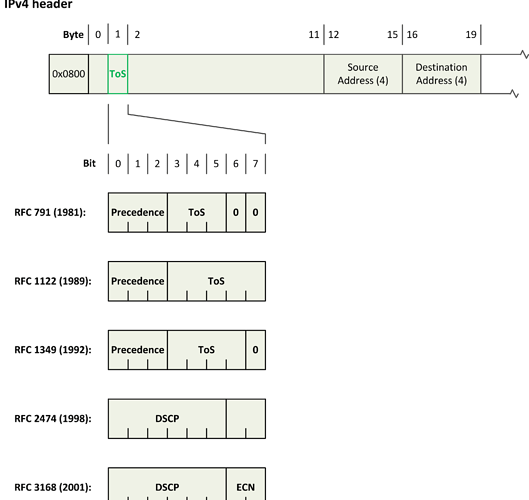 PTP 650 and PTP 700 provide a flexible QoS scheme based on the DSCP field. You can select QoS treatment based on the IP header using the Data Priority Scheme attribute. Here is an extract from the QoS Configuration web-page: 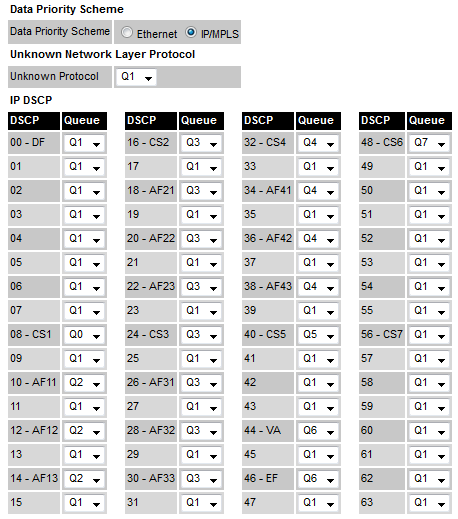 The rectangular array of controls map each DSCP value to one of eight queues, where Q7 is the highest priority and Q0 is the lowest priority. The names of the special codepoints are added after the decimal numeric value of the DSCP.

PTP 650 and PTP 700 set default mapping based on standards and on the recognised meanings of the codepoints. If your network is different, you can set up any custom mapping needed.

PTP 650 and PTP 700 completely ignore the ECN field in the ToS byte.