Email based reporting would be nice, or even a way to save a report of installs to the app and then at end of the day shoot off a nice email report of all the installs from the day, perhaps allowing once the install is done to even take a pic or 2 within the app and tag them to the install for the report.

I know its a bit outside scope of a radio configurator, but i think since we're talking a tool for handling installs and its being used by installers mostly it would really be helpful, since the tool has all the information/signallevels/configuration/latlong etc of the radio, would really streamline things i think

The goal is to streamline the install, and we are also thinking along the same lines as you. An "Installation Summary" and ability to share it via email will be part of v1.1. Open beta is expected in early March. We plan to add the ability to attach photos also to the Installation summary, but that will be in a subsequent update. 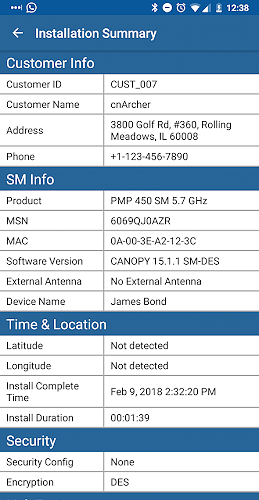 Being able to email the report is nice , but why don't you guys take it one step further and post the installation data , pictures and perhaps something identifying the installation team responsible directly into cnMaestro ?

@Steph, thanks for the suggestion.  We will plan to add that functionality.  Don't have a commit date at this point though.