I spent a couple hours today testing this. I tested a 450b mid-gain on 15.1.5, and am not able to succesfully provision an SM. After I enter the SM name and try to go past the VLAN configuration screen, the app gets stuck in a loop that just repeatedly tells me to 'Switch from static to DHCP', and there is no way to stop the error or even go into settings if I wanted to fix the problem. I'm still able to browse to my SM at 169.254.1.1, so the app should still be able to talk to it, but it says it cannot. I don't have this problem when doing an install with the Android app.

Version 1.1.14 on Android works just fine for us to provision 450B's on 15.1.5., without any manual configuration of wifi settings. When provisioning SM's with the Android app I leave the management and customer VLAN blank, and then I'm able to apply our cnMaestro templates to finish the configuration. I've tried the same with the iOS app, and then I also tried configuring the SM using my VLAN settings, and I still get stuck in the same loop of the app telling me to 'Go to settings and configure wifi settings.'

After going through other posts it became apparent that we need to configure a static 169.254 IP prior to starting the installation, and then switch to DHCP when prompted after the VLAN configuration page. The 'Switch to DHCP' loop will occcur if you try to start the installation while on a DHCP address, even if the SM is still reachable at 169.254.1.1.

I'm now able to get past the VLAN configuration page, but when I try to select one of my JSON templates my variables do not show up, and it also looks like it applied my template name as the SM name after I still tried to finish the SM installation when my variables did not load.

We are investigating the issue.

Also, the SM name and other configuration paremeter on the SM and applied before th eapp moves to cnMaestro screen. This is as expecteted.

Sorry, what I'm trying to say is the app applied my cnMaestro JSON template name as the SM name and on-boarded it into cnMaestro, instead of using the SM name I had configured on the VLAN configuration page. I'm going to do some more testing this afternoon.

I was able to replicate the behavior of both problems, my JSON variables not loading as text fields in the cnArcher app, as well as the app setting my JSON template name as the SM name when loading into cnMaestro.

We will look into these issues. Thanks for using the "Report a bug" feature of the app to send us the debug logs, jw1.

Were you able to replicate any of the behavior I saw?

We are able to replicate the issue and the fix is being tested.

Is there going to be a fix released for this?

Sorry for the delay in responding. A build with the fix was submitted to the iOS store today morning. It usually takes a day or two for the review to be compelete before it goes live.

Unfortunately, the app still does not prompt for our cnMaestro template variables in the on-boarding screen on version 1.1.2 with iOS. I tested an iPad and an iPhone. 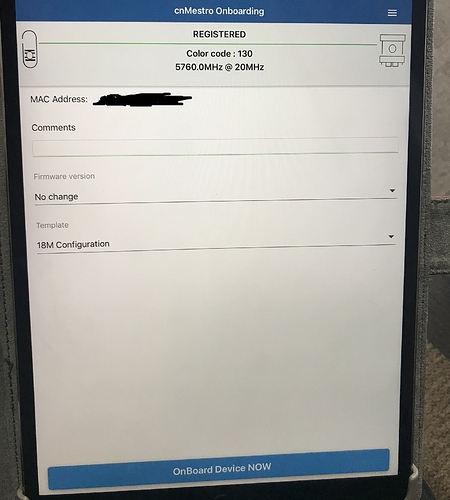 The other thing we have noticed is that the app wrongly assumes that it has no connection to the SM on 169.254.1.1, and tells us to switch our network connection after this screen. 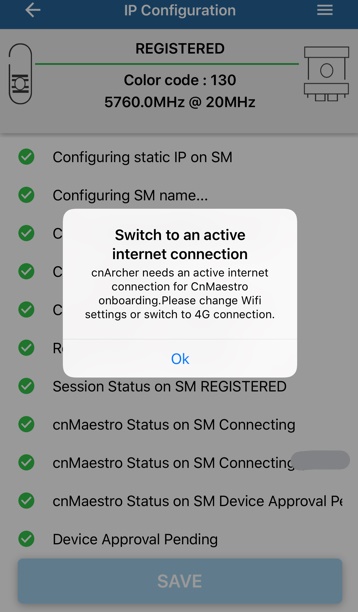 In our network, and for our use case, we do not need to change our IP settings on the iOS device to get to the cnMaestro screen, because the SM is still reachable on it's 169.254.1.1 address. It is pointless to force us to switch from a static 169.254 address to a DHCP 169.254. address, when the SM will be reachable from both. Right now, the App will not proceed further because it forces us to change, even though it is not necessary to change because the SM is still reacahable over the 169.254.1.1 address.

If additional logic could be built that checks if 169.254.1.1 is reachable and not force us to switch from the static IP to DHCP that would eliminate an extra step in the proceess for us.

Were you able to replicate the inability to use cnMaestro JSON variables again on the current iOS release?

@jw1, at this point in the installation workflow, the iOS mobile device no longer needs to communicate directly to the SM.  Instead, it needs to connect to your cnMaestro account.

Regarding the cnArcher iOS issue where the template variables are not showing up, the next cnArcher iOS beta update will include a fix for this..... possibly sometime next week.

Thank you for the update! Looking forward to the beta release, we have use cases for the QR-Code and and Work Order features in the Android app, but unfortunately our techs and installers are all on iPhones.