Is anyone else seeing tons of SAS errors this morning?

We are seeing tons of SAS errors starting at about 0300 this morning and I was wondering if anyone else is seeing the same.

They seem to all be 504 SAS unreachable. our AP that is using a PAL is no somehow on a GAA channel as well.

Federated SAS had an issue for several hours this morning. It has reportedly been fixed, but we are also seeing weird operations for our GAA APs that were previously working well. We had to revert a few changes that were made overnight by the SAS prior to them going offline and so had to manually audit all of our 3G APs this morning.
It’s been a great day! /s

@MiahSchaller we are also experiencing the same on some of our sectors, what was your procedure in resolving the issue?

On the day of the incident, we spent the morning reverting weird changes that were done by the SAS overnight; such as some APs were moved from 20 to 30Mhz channels, some were using weird off-channels like 3695 and a few that were bumped down to 10Mhz channels. In most cases were referenced the frequency re-use we had set to get them back to proper channels. We did have to find new frequencies for a few APs that started seeing interference following the changes by the SAS; we are assuming that others were also impacted by changes and have not yet gotten their equipment back to normal, but no way to verify this.
This morning I found that some of the client SMs on one of our APs were getting grants for 3 or 4 10Mhz chunks, when they should have only gotten 2; one of these customers was approved for 20EIRP, -5 EIRP, 20EIRP, 20EIRP… We had to flip-flop the frequency at the AP to get back to normal grant status.

Overall I’m rather frustrated with the whole situation and hope there is a resolution to prevent this from happening again in the future. 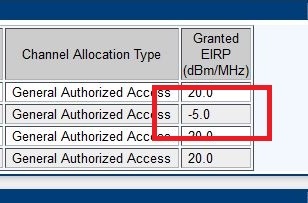 Federated Wireless had a partial CBRS outage in the early morning of January 4. Customers who reverted to Part 90 during the outage should now switch back to Part 96 as soon as possible.

Federated Wireless has committed to providing a root cause analysis within 72 hours of the incident. Cambium will relay this and other related information to our customers as we receive it.

Customers who are currently experiencing technical difficulty or need assistance with channel configuration should open a ticket with Cambium Support.

Cambium maintains a status web page for all of our cloud-based services here. When incidents like the Federated Wireless outage occurs, Cambium provides up-to-date status information as we work to resolve issues.

@Olivia_Cambium has there been any new information released from Federated?