It's nice to see that Cambium listens

So myself (and others) had previously complained about the regress in the mounting hardware for the Force 300 as the bracketry is inferior to that of the Force 200. This morning I opened up a brand new Force 300 and it looks like Cambium finally redesigned the bracket. It’s now a… square… bracket for a round pole. Makes perfect sense… 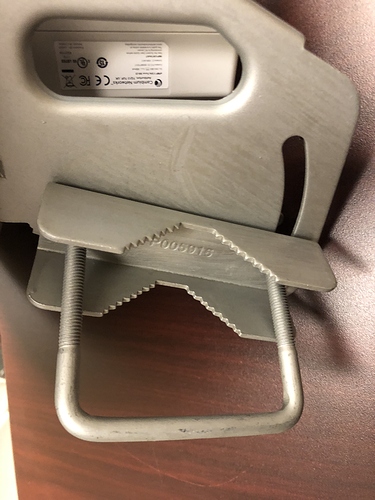 Yeah, not really ideal but at least the square bracket will tighten down on normal size j-poles, rhon 25g towers, antenna masts unlike the gigantic U-bolt.

If Cambium designed a truck… 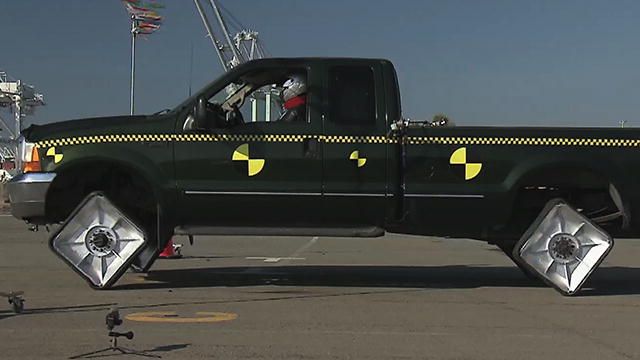 Replace the headlights with little bitty led lights that you can’t even see in the dark and I think you’re on to something. Oh and little plastic straps for door hinges so the doors fall off every time you open them. Oh oh oh ! Also the windows should have gaps between them and the frames so bugs/critters can get in. And no reverse , it can only drive forward… it also only runs on that gas you buy in cans for camping stoves and lanterns.

Yeah, I found the square u-bolt a bit odd too… It looks to me like whoever came up with that idea intended to have a second pipe saddle, but that idea got thrown out and they didn’t bother switching to a rounded u-bolt…

But at least it does works on smaller pipes, even if it isn’t ideal, and we don’t have to carry an wrench anymore.

I also can’t understand why they didn’t make it so that the feedhorn could be flipped over, so the bracket could be on the other side. It may not seem like a necessary thing, but there are times when shifting the dish a few inches to the left is the difference between not being able to use a specific mounting location (or having to remount the whole thing, when you’re replacing a Force 200, which could be flipped to the other side), and it would have only taken tiny change to make the feedhorn work either direction (basically just moving the tabs a couple millimeters).

Or just not have the metal tabs/clips. When we need to flip a dish we cut them off, the two bolts in the front hold the horn in just fine. I’m not sure what the clips even add to the mix because they don’t hold the horn well enough that you can not put the bolts in but the bolts hold it great without them.

The clips also make it much harder to swap a horn without changing the whole thing out. The clip on the bottom is a real PITA and you usually have to move the ladder twice to remove the the two bolts and get at both clips… almost easier to just replace / re-aim the whole unit.

As easy as assembly of the F300-25 is, it’s a little easier without the clips.

I’m seriously thinking I would be ahead of the game to just start cutting those clips off all of them.

Yeah, it almost seems like the only purpose of the clips is to keep you from being able to flip it…

Cutting them off every dish would kind of be a pain though.

We typically do just replace the whole dish and re-aim when we need to replace one.

I posted this a couple months ago on the wisp Facebook forums. Makes absolutely no sense at all! This seems like they ran out of normal ubolts and substituted it for a square one on the fly and didn’t tell anyone. I have seen maybe 3 or 4 of these square ones in the hundreds we have installed lately as swapouts from force 200 units.

It actually does make sense as an inexpensive way to “temporarily” solve a poor design issue without having to completely re-tool the manufacturing process.

The original u-bolt wouldn’t fit on pipes smaller than 1.25~1.5" or so - no using Laird J-arms with the original units! The square u-bolt solves that problem without having to totally redesign the bracket.

The bracket does need a total redesign though, for all of the reasons already mentioned. It’s a major step backward from the force 200, which also had a bracket problem - It wouldn’t fit on a 2" pipe without longer bolts.

I would also like to see the Force 200 hardware return to the Force 300 (or the future product).

I’d like any of CN to go up with me for installing a Force 300-25.I’m sure they’d redesign the mounting hardware immediately !

Send these guys up on a few towers / house roofs in the heat/cold with little/no help to install the thing they designed once a week or so and suddenly you would be able to install most of this stuff with one hand / tool. They would also stop using screws for attaching the ground on the AP’s and surge protectors and you would see studs with a nut instead.

Having done ubiquity for several years (and we actually just removed the last M5 Nanobridge PTP a week or so back ) I can say that the F300-25 isn’t any worse than a nanobridge now that it has a ubolt that will tighten down on the stuff we actually install them on.

That said, the installers and myself got pretty spoiled with everything about the F200 dish/mount.

I remember trying to remove the horn from an installed Ubiquiti Nanobridge shudder. We started filing down the plastic ridge/catch on the horns and then they weren’t so bad to get out.

All I can see are PMP320 wheels

I’d like any of CN to go up with me for installing a Force 300-25.I’m sure they’d redesign the mounting hardware immediately !

I actually prefer the Cambium GUI over the new UBNT GUI, but that’s just me.