Link Up, Node Down [cnWave]

I just setup a new CN to DN connection. Both are on firmware 1.2.1. I configured the sites, nodes, and link in cnMaestro in the E2E controller. The link shows “up” but the node is “down”. What causes such a problem?

[The process we followed: The DN was setup in the E2E controller on firmware 1.2.1. Then, everything was configured in cnMaestro for the link. Powering the CN for the first time did not result in any link (Firmware 1.1 on CN). Factory default of the CN resulted in a successful link, but node still down. Update to firmware 1.2.1 manually on the CN had the same behavior. Additional factory default of CN had the same behavior. I removed the link and node from cnMaestro, and started over which resulted in the same behavior. At this point, both sides are on 1.2.1, and the CN was recently defaulted. I cannot seem to get the node to come up.] 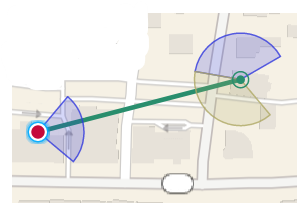 I’m struggling with this. I’ve spent several hours testing, and seem to get slight variations of behavior almost every time.

99% of the time when you have a situation where a RF link shows Active (green), but the connected node shows down (red), this is indicative of a routing issues between the remote node and the E2E. Is your setup using an External E2E, or Onboard?

If you’re available for a few minutes over the weekend, you can DM me and we can hopefully quickly sort out your issue.

This is an external E2E that is located at the same site as the DN. I’ll send a message.

Thank you very much for your help. I documented your primary guidance here so it could be useful to others.

If anyone else has this issue, the route for your seed addresses needs to be established.

This can be done within cnMastro by adding a static route here:

When setting the route, your destination is your “Seed Prefix” which you can find here:

image1220×547 61.4 KB
[This works if you’re using Centralized addressing, but not necessarily if you are using Deterministic addressing.]

Assuming you are starting with just one DN, you want to set the Gateway for this route to be the External IPv6 address of that DN. You can find this here: 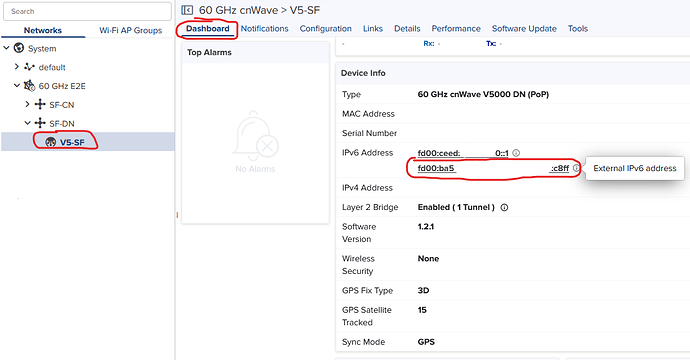 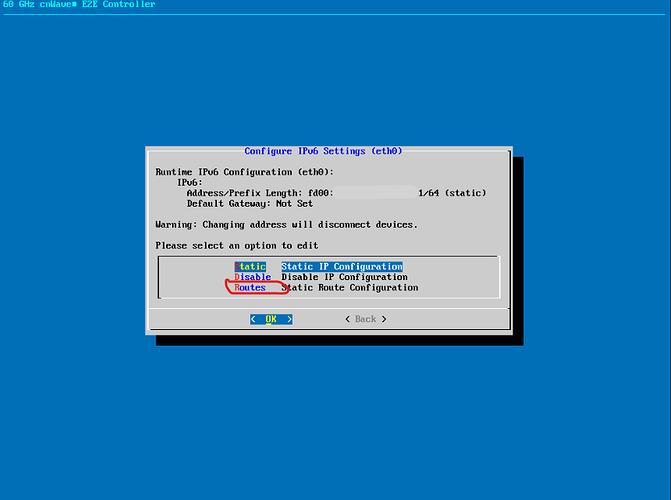 Now, this does not apply universally, but if your E2E controller is in the same L2 network as the edge of your cnWave network, it should be a reasonable approximation for a basic single PoP system. Further, it is possible that cnMaestroX does this step for you automatically whereas I am using standard cnMasetro.