The Windows version of this release is now a Cambium signed executable.

If you have the LINKPlanner email address bookmarked please update your address books with the new address.

See the Knowledge Base article for more details on the changes to the PMP 450m EIRP limits, https://community.cambiumnetworks.com/t5/LINKPlanner/Understanding-PMP-450m-EIRP-limits/m-p/95872#M24

These parameters are to determine whether the device is to operate in BHM/BHS or in Multipoint mode as an SM.

Please see the Knowledge Base article on Cable drops and Ethernet Configurations for PTP 820 for more guidance on the above configurations, http://community.cambiumnetworks.com/t5/LINKPlanner/Cable-drops-and-Ethernet-Configurations-for-PTP-820/m-p/95876#M25

In a similar manner to PTP some regulatory bands allow the AP and SM to be configured to be either Hi or Lo. The channel frequencies selected in the Channel Plan will always be the Hi values but will be allocated to the AP or SM depending on the Hi end setting.

The “Unpaired” setting configures the same frequency to both the AP and SM as in conventional TDD PMP networks and is specific variant of the “Any” T/R spacing. When the T/R is set to Unpaired a normal channel plan can be used to allocate the channels to the APs in the network. If the intention is to use the same Tx/Rx frequency, then it is recommended to use the Unpaired setting.

When the T/R option is configured for “Any” the Channel plan functionality cannot be used, instead the individual frequencies for the AP and SM are configured directly at the AP using a similar transmit frequency selection window to the one used on a PTP link. 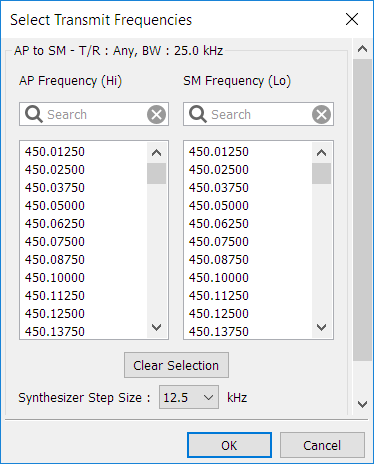 Although the PTP 650 product is now obsolete it can now be connected to the CMM5 Cambium Sync unit if required.

This changes the maximum number of groups being formed in low bandwidths and low or high Downlink Data ratios.

Spatial diversity is not supported with the PTP 820G or PTP 820i 2x1+0 Unit Redundancy configuration on the product and has been removed from LINKPlanner. This release increases the number of fiber adapters for Line Protection Mode (Optical) and Optical Splitter Mode and Fiber 1+1 splitters for Optical Splitter Mode.

Releases 4.8.5 and 4.8.6 aggregated the CMM5 component parts at the network level BOM for PTP 670 and PTP 700, when this is not appropriate across different PTP End points. This has been corrected in this release.

Previous releases were incorrectly showing 900 MHz radios and 900 MHz antenna kits in the BOM Estimator for PMP subscriber modules. This has been corrected to show the correct radios and available antenna kits for the frequency band selected.

Previous versions of LINKPlanner showed the Channel Plan options in the PMP Equipment Template which allowed a common channel plan to be applied, but if the channel plan was then updated to allocate the actual channels to each AP and then the PMP Equipment Template is reapplied, the channel plan was over-written (even if it was left blank). The Channel Plan is not expected to be a common parameter for all APs in a network and has been removed from the template.

All pop-up windows will now appear over the LINKPlanner parent window, whichever screen that is displayed on.

This is not used in licensed band only for 900 MHz ISM, but it may cause an error message when opening an old project. This error message can safely be ignored.

When updating to this version I can no longer see my Mapped network drives through the Linkplanner if I want to set a default path for my Template. Oddly the Windows File Explorer shows that the network drives are still there. I am downgrading back to 4.8.4 as there seems to be no way around this.

What version of Windows are you using? It works as expected for me in Windows 8 and 10.

It turns out, running as admin will remove the mapped Network Drives. I ran without admin and it appears that my Network Drives now show up. Thanks