LINKPlanner online has been updated to version 6.0.2. The key features of this release are:

The new V2000 60 GHz cnWave radio has been added and is available in the product drop down selections alongside the V1000 and V3000 radios.

As part of this change we have also increased the maximum MCS for the V1000 to MCS 12. This does not improve the data rate to any individual V1000, which is limited by the GbE port, but may show a small improvement in the overall DN throughput. When opening old projects the maximum MCS for the V1000 will not change, but will update if the product is changed to V2000 or V3000 and will maintain MCS 12 when returned to the V1000. To change all CNs in a project or on a DN, update one CN to the required values and then in the PMP Links table or the Links to Subscriber Modules table on the DN select all the rows and then select “Copy from existing” and choose the name of the CN that has been updated. This will change all the CNs to have the same equipment settings.

You can select this from the list of antenna options

The loss of the radome has been incorporated into the antenna gain and will be slightly different for each channel. The radome is purchased separately from the antenna, so the BOM will include the existing High Gain antenna and the radome. The radomes are only available in packs of 2.

The Node Type column by default is blank (as not required by any other product family) but can be bulk edited to set to either DN or POP for each site as required. 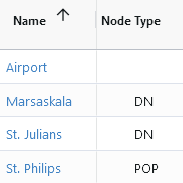 The C000000L190 Alignment Tube is now added automatically to every DN that has at least one CN using a V3000. Please remember to adjust total quantities if this results in more alignment tubes then required.

The Spatial Frequency is used in the Mu-MIMO calculations using a similar algorithm to the PMP 450m and has been made available as a column in the PMP Links table and Links to Subscriber Modules table, to aid in planning appropriate separations for improved Mu-MIMO performance. It is dependent on the channel frequency and bearing to the AP.

Increase the default limits for number of projects per user and sites, Network Devices and PMP Links within a project