Software Release R22 is now available and is the latest version of software for the PMP 450 platform. It contains a feature called Multiple Groups per Frame or MGPF. You can read about what it is and how it works here:

This feature is introduced to improve sector throughput, particularly in 5 ms frame or 30 or 40 MHz Channel Bandwidth configurations. With this feature, Cambium Networks PMP 450m AP software can change which SMs are Multi-User MIMO grouped in the middle of the frame, rather than being restricted to one set of grouped SMs through the entire frame, for the traffic in the downlink direction.

I would love for folks to download and update their networks, and gather some feedback about how it’s working for you, especially if you’re seeing any capacity gains and/or reduction in latency while using MGPF. It’s especially useful on busy sectors and during heavy traffic periods. Please post your responses in this thread. We have already heard from a few folks that were testing this while in Beta, but now that it’s out officially, we’d love to hear more!

We updated all of our 3.x 450M APs to 22.0, and utilizing 5 MS Frame Period with a 80/20 Frame Configuration, we have seen increased throughput and a decrease in Frame Utilization. On one of our 3.x APs using Link Test with Multiple LUIDs, total aggregate throughput is now over 500 Mbps. This AP surpassed 400 Mbps download last night, although the MU-MIMO Frame Utilization flatlined. Does the MGPF use the CPU? We want to make sure that we are keeping an eye on the correct stat for the other APs we have in the system. But overall this fix helped a lot of our APs that had the frame rate hitting 100% and flat topping.

If you’re using cnMaestro you should be able to track before/after CPU usage on the Performance tab. That being said, we’re using R22 on 450m 3GHz AP with over 100 SM’s registered and a 40MHz channel and CPU usage is just under 75% during peak hours, hitting around 260mbps aggregate.

We are using cnMaestro to keep track of our system and we saw a small jump in the CPU on our aps. The AP that I mentioned, I forgot to add that is was at 40 Mhz channel with a 5ms Frame period. How is the grouping on your AP? We saw our grouping change from a good solid 3 to a little more over the place 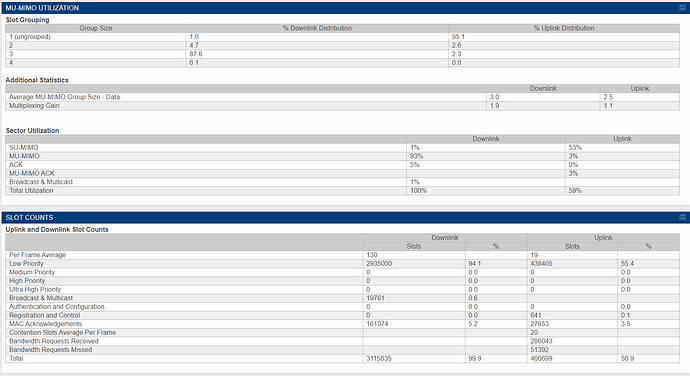 This is great info Montana Net, thanks!

Started to roll out version 22. Some AP’s getting fatal error and rebooting so ended up staying with 20.3.1.2 for now.