We have a customer 4.3mi directly North of our ePMP 1000 micropop with a beautiful LOS. He has been experiencing strange disconnects with poor link quality the past few months. eDetect shows no interferers. Alignment is great, mounting is stable. We replaced the sector AP and antenna, even upgraded the cluster to ePMP 2000 w/ beamforming antennas.

The customer is understandably frustrated and at his wit’s end, and I’m at a total loss. Screenshots attached. 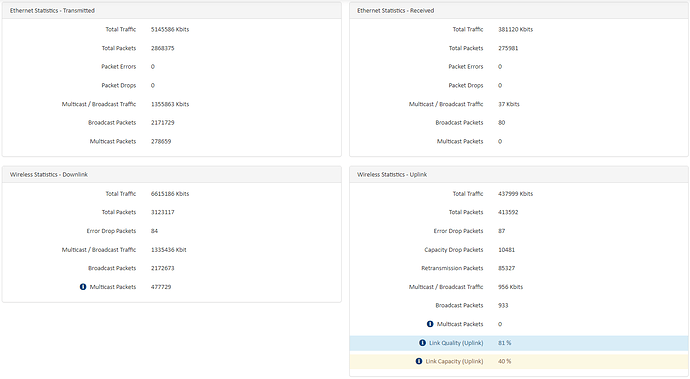 Downlink MCS % is showing majority of packets being sent at MCS1, and uplink packets are being spread all over the MCS range. I’d guess that this is some localized interference near him. Try running an SA on his side, check to see if he has any 5ghz devices onsite.

eDetect only sees WiFi and I think even then only access points so you could still have a lot of interference from clients of an AP or the backhaul of a mesh router, or who knows what. Think of eDetect as a WiFi site survey tool with massive brain damage.

That said, the problems you are seeing are pretty much text book interference on the customer’s end.

It looks like the problem is download on his end and his upload is much better ? So again, high probability it’s interference and on his end. Is the poor performance constant ? If it’s random it become a lot harder to find, if it’s constant then a link test would pretty much tell you immediately that you found/fixed the problem.

What kind of CPE is this ? I would suggest some trouble shooting that involves running the SA on the CPE but really I find ePMP SA’s to be pretty much useless / difficult / time consuming / uninformative. That said, if none of the “easy” options to find the problem work then the SA is going to be your only option. Since the SA is not GPS aware (are you using GPS sync ? ) it’s kind of a crapshoot as to whether or not it’s output will be useful (is that RF it’s showing at 5740 interference or is it your own AP ?..)

So assuming the problem is constant the first thing I would do is have the customer unplug from power every single WiFi router, extender, remote mesh devices (and do they have wireless cameras ?) anything that might use 5Ghz (many mesh routers use huge swaths of 5Ghz, don’t tell you what channel they are using, and you can’t change the channel/width they use). Depending on the customer, you may have to go out and do this yourself because a lot of customers can not perform seemingly simple tasks like " unplug the power to the router" reliably. Once everything is unplugged, run the link test. Is it all better ? Problem maybe not solved but now you know what it is.

Depending on what CPE you are using at the customer end you might be able to change him over to something with a more narrow pattern or possibly better front/back or possibly relocate the CPE to a spot were the back/sides are blocked by trees or a building or something.

Thank you both for the help - these head scratchers can be really burdensome! “Think of eDetect as a WiFi site survey tool with massive brain damage” hahahaha I really like that analogy. I can empathize with it.

Unfortunately the performance degradation is seemingly random. My only thought it some sort of localized EMI/RFI. I’ve done a SA on his end and detected nothing out of the ordinary; ~85-70db noise floors. I made sure his router was operating on the 2.4GHz band exclusively. I like the idea of a more narrow beamwidth with something like a Force 300-16. The current SM is a Force 200.

Random is the worst… If it was me and it was an option I would change the channel being used on that AP to something I could leave it on a few days and see if the problem changes/goes away. Otherwise maybe try to figure out if the random is really random. Could be a multipath / reflection issue that only happens at certain times of hte day/weather conditions. Do the random problems seem a lot worse during certain times of the day/night ?

Otherwise, bad CPE always an option. Been a long time since I looked at the specs/patterns of the various CPE’s but not sure changing from an F200 (24dBi antenna)to a F300-16 (16dBi) is improving or going work well at over 4 miles.

That said, the F300-16 (can you not use a F300-25 ?) has an SA that is… in theory, sometimes way better than the one on the N radios. If nothing else it might help you figure out if the problem is RF noise since you can leave it running… kind of , maybe, or maybe not… or it might just glitch out and/or make the connection the worse.

Cambium should hire you to write the ‘more accurate versions’ of the product spec sheets.

Already got their new slogan " ePMP , costs more, does less."

It appears you have tried all the usual tactics and interviewed the usual suspects. We also had one like this, nothing would fix it, random occurrances with MCS level going whacky Neighbor 100 yard to the east ran solid with no issues. We finally determined it had to be something like alien spacecraft or psychic fresnel interference, something with science. We were on the verge of moving the customer to 2.4 even though it was clear LOS under a mile, but instead we calculated how much extra cable there was without actually having to run a new cable and were able to move the antenna 3 feet to the east and bump it up about a foot. with a small extension. and problem went away. Why that made such a difference, who knows, but it did.

Just to add, have your customer plug directly in to the data port on the power brick. Make sure the wifi router power is unplugged.
We have had a few client that chose to get a nice expensive router that does everything plus some only to have it kill their internet connection.

Also you never mentioned if this is dense urban, sub-urban, dense rural or rural. Sub-urban areas gennerally are very client side noisy due to the wifi routers choosing the cleanest channel (yours due to not being able to determine it) and then they kill your signal for the SM.

Solution, get a force 300 and use its live SA to scan the area. In detail mode it can see wifi, UBNT, Mimosa and identify them, their ssid, and channel width. This extra detail can be slow to so up on the page but it will eventually and the best part is, it can show you the best frequency to be on from your SMs point of view.