Does anyone have a good source of the cable glands for the PMP450i APs? Annoyingly, there isn't a second one included with the AP...

We're using Netonix switches and a Packetflux Syncbox Junior Aux Port Version for smaller PMP450i sites, so we need to run a cable from the aux port for sync. For one site, I had found a couple plastic cable glands from Skintop in a bin of spare parts, if I had to guess it came from an old third party Mikrotik enclosure, though I was unable to find a supplier for that part.

We found the official glands from Cambium were about $15, which we may end up purchasing if an alternative can't be found.

This is a tiny bit shorter than the official gland, but it works, and is 1/3 the price:

The other difference between that and the Cambium gland is the rubber bushing.  I think the Newark ones have a larger diameter hole, and may not seal as well using ethernet cable.

Matt is correct - the rubber bushing on the Newark ones do have a larger hole, but much of that difference will go away if you tighten down the outer shell, as it compresses the bushing.

This shows two identical glands; the one on the right was hand-tightened to compress the bushing. 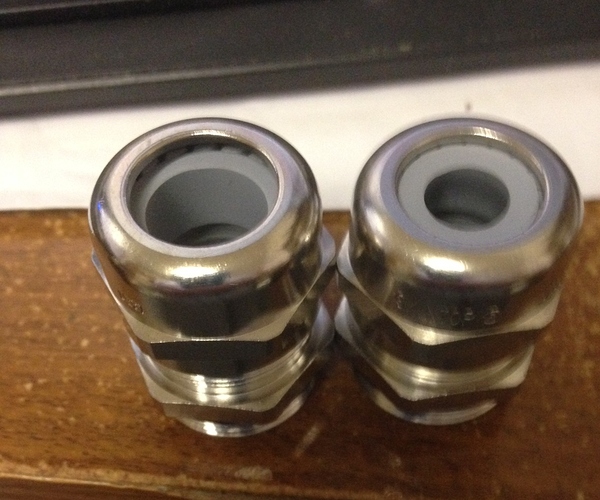 Great info Darren!  Thanks for sharing that.

That one from newark is definitely what we're looking for!

I'd still really like to see Cambium throw another one in the box.

Haaaaa... this caught us too.  Most of the time we're doing sync over power, but in upgrading a couple small sites we went with aux port timing devices recently.  Our "creative" construction crew worked around it, but I don't like the hokey solutions on expensive access points.

Hence my very succinct suggestion in the ideas section a couple weeks ago: