Is there going to be a 5.9 STA version of this coming out?

Yes, it’s being developed now. It will be available very soon!

STA versions for 20.0.1 and 16.2.3.1 have been uploaded. If you had access, the same link will work. If not, you will need to go through support in order to get access.

Thanks for the update

Looks like there is an error importing the cnMaestro tar gzip archive. When attempting to open it there is a CRC error.

Oops, sorry about that. We are investigating and will report back.

Sorry for the inconvenience.
Thanks for reporting this issue.
The issue is fixed now. Could you please try downloading the package again.

No big deal it works now.
Thanks

Running 3 1/2 days now on 20.0.1 with no issues. The initial problem we saw with SMs dropping registration with the 450i 900 appears to have been resolved. Seeing the new modulation rates kick in and frame utilization is down a bit overall as a result.

I’m still seeing some weirdness in PMP450 2.4GHz. SM’s that stay connected but you can’t ping them, or reach them via proxy on the AP. You have to drop the session at the AP for the SM to re-connect. Have also had issues with needing to reboot the entire AP to get some customers back.

When this happens is just a dump from the AP good enough? I want to send this off and get it fixed cause 2.4GHz could really use the boost in modulations.

Glad to hear this issue was resolved. Thanks for following up and reporting back.

@Ryan_Ray, yes let’s start with captures. One during the problem, and one from both the AP and SM after dropping the session manually and it recovering. Do you have a support ticket open?

We do have one known problem where all SMs drop session at once and the AP runs at high Frame Utilization of Broadcast. In this specific failure, the AP needs to be rebooted to start transmitting correctly again. But this doesn’t sound like your issue.

I don’t yet but I will open a ticket with captures the next time the problem shows itself.

I agree it doesn’t sound like broadcast problem is the same one.

hi all is this 20.0.1 code for non-CBRS devices and CBRS devices? do you guys have any pain points while running this code? we use 450i and 450m devices only…

Its for all PMP450 products and we have been running it for 4 days so far and no real issues.

has anyone had any trouble with SM’s reconnecting to cnMaestro after the update? I am using cnMaestro on premises I had no issues with updates up to 16.2.3.

A small issue we encountered today. Everything on the 450i 900 is running fine on 20.0.1 but an installer fired up an SM still on 16.2.3 today at our test bench, which happens to be very close to the AP and it connected, though he hadn’t realized it had.
It of course register with the 2X/2X MIMO B for the brief period he had it powered up due the software mismatch.

I happened to notice in the the AP session list several hours later the AP was still showing as active. The DL power and SNR were NA but showed them on the UPLINK side. Tried the REMOVE IDLE SMs feature but it still down not clear it. I’m sure a reboot of the AP would probably clear it out.

It does not appear to be causing any issues, but thought I would pass it on as it could cause some confusion. I am curious if it could somehow block the SM from registering later due to the same MAC showing in use, since it was still “active” in the session list? 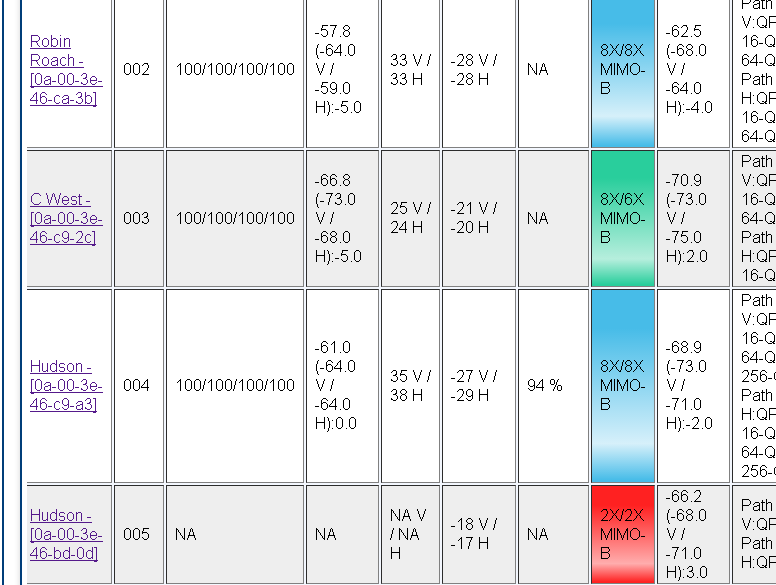 I did see this issue. We were running an older version of cnMaestro on premise. Once we updated to 2.3.0r28 ova or later, the issue resolved itself.