We are looking to modify the alignment page in cnArcher.  Do you have some feedback?  What works well?  What is problematic?

When using a mobile device, how does it compare to the PMP 450's new device user interface alignment screen (which has been refreshed in PMP version 15.2)?   See a video of this at https://youtu.be/HjMcJfPfnr8.

On the right:  cnArcher alignment screen 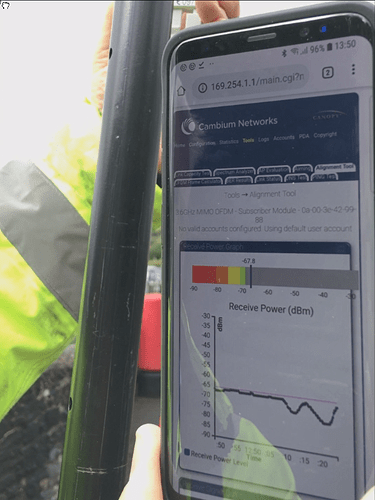 It would be nice if the alignment page in the radio and cnArcher provided the target RSL for the installer. Eventually, if Linkplanner is ever tied into cnMaestro, then a target RSL could include the AP antenna gain based on location.

I like the CNarcher alignment interface in general, although adding the moduliation level in addition to SNR would be a simpler quality reference for our field techs as they don't always appreciate the significance of SNR above getting them near equal.

I don't think the dual-axis graph, as represented in the proper 450 tool, or the linear heat map is necessary for cnArcher to replicate: it's much handier to have the best, current and deviation from best levels represented on a phone the way they are currently, in my opinion.  Big, bold, colorful, and easy to read at a glance trumps granularity when on a tower in the rain and wind.

As a suggestion, it would be pretty outstanding if you could leverage Google's voice API or a similar service to actively read signal levels aloud to the install via the phone's speaker - that is one request I've had from several installers already.  It is inconvenient to hold the phone in hand when scouting or otherwise trying to manipulate the radio with two hands, so a voice-announced signal may give them the opporunity to find a reasonable vector to the tower before pulling up the phone in hand to fine-tune the orientation.

I am in favor of setting a target RSL for the install. That way an installer can verify the install based on the output from Link Planner.

I like the idea of the audible RSL via iPhone speaker/headphones. Don’t bother saying the “negative”, just the number.

You could, with a bit of humor, add the “colder” “warmer”…”getting hotter”. Lol. Just kidding!

The key thing is to always peak up finding the main beam. Once this is done, check that the value is within the LINKPlanner range.

The main advantage of the plot is that it is very easy to see where you have been with the trace going up and down as the antenna is rotated either in the azimuth or the tilt. In fact there is more granularity in the big bold readings.