LINKPlanner suggests using around -37.0 dBm Transmitter power which is of course not possible with the PTP 650 since the minimum Tx power is -15 dBm.

I was therefore going to retain 30dB attenuation in each of the four antenna feed lines (for additional 60dB loss) and then reduce this attenuation accordingly, rather than start off with too much power and risk damaging the receiver...

My question:  What is the receiver power range?

I realise that the PTP 650 can actively reduce the power levels.  Is there an optimum receiver power that it is trying to achieve?

What Rx power level would damage the receiver?

(In another post there is mention that a PTP 650 minimum range can be <10m.  I don't understand this.)

Thanks in advance for your help.

Thanks for an interesting set of questions!

I created a LINKPlanner project for an 11 m link in a 5.8 GHz band with DFS (radar detection), and LINKPlanner calculates -37 dBm transmitter power, but clearly indicates that the PTP 650 power cannot be set to this value. The configuration pane looks like this:

We also see that LINKPlanner has set the target receive power at -51 dBm. This is the largest received power that can be accommodated without triggering the radar detection mechanism. The ODU does not have sufficient power control range (by a margin of 22 dB) to operate at a range of 11 m in a radar region.

So, consider what happens if we switch to integrated (23 dBi) antennas and change the region to one that doesn't need radar detection (for example, the United States); now the target receiver power is -35 dBm, and the transmitter power should be configured to -13 dBm. This is the basis of the comment in another post where we say that range could be as low as 10 m.

You also ask about the set point for automatic power control (APC); the power control attempts to achieve the maximum possible receive power, subject to a maximum of -35 dBm in non-radar regions. The maximum in radar regions depends on which region and band, but is normally less than -50 dBm.

Many thanks for the information. This is very useful indeed.

Sorry for asking so many questions at once!  That probably wasn't very helpful.

Is there a minimum receive power required, or is it not as simple as this?

Would this vary according to ambient noise levels?

Thanks for your help! 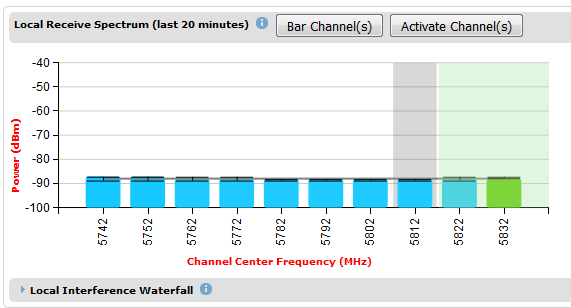 Of course, in a real (radiating) link there will normally be a higher background interference level, unless the link is installed in the middle of nowhere.

The wanted receiver power is in the System Status page like this: 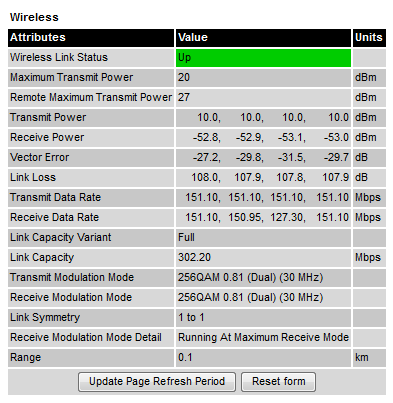 My link has a Receive Power of -53 dBm. This is providing an excellent Vector Error of -29 dB allowing the link to operate in the highest modulation mode of 256QAM 0.81 Dual.

You ask about the minimum receive power. We tabulated those numbers in "System threshold, output power and link loss" in the PTP 650 User Guide. The thresholds go all the way from about -97 dBm for BPSK mode in a 5 MHz channel, up to about -60 dBm for 256QAM 0.81 Dual in 45 MHz channel bandwidth.

As you might expect, interference on the operating channel increases these thresholds. The Vector Error attribute is normally a good indication of the signal to noise ratio achieved, and thus the modulation mode that the link can sustain.

Thanks so much for your help.

I realised before I read your email that I was incorrectly reading the received power levels... Sorry.

The information that you have provided has been extremely useful in helping a novice better understand the system.

Why are there four columns in the attributes data section, often with very different values?