Ok, so I need to start replacing Nanobridge M5 PTP links with units that will provide more bandwidth.  And I HAVE to be able to reuse frequencies using GPS.

I have my primary backhaul running on an Airfiber 5ghz link that I am very happy with. Running in DFS with no issues whatsoever...

3. I really don't want to spend $500 for each end for Airfiber. I can get GPS enabled EPMPs and attach them to these Force 110 dishes.

4. Units need to be able to deal with possible interference from other close-by radios.

What would you guys recommend on this?

They do have a gps sync radio ePMP 1000 that's a connectorized unit and you could attach it to a rocket dish. That's what I would do. If not then just use the UBNT Airfiber X.

If you can maintain MCS 15 with the ePMP units running 40Mhz (-62 or better with good SNR) you should be able to do 150+ one-way without much issue using the GPS lite units.  I have an 11 mile link running these with 2' dishes that can do about 180Mbps one-way.

At the same time though, a 30Mhz channel on the AF5-X will get you similar or more throughput while using less spectrum, and at $379 not spend too much more money.

Thanks for the info everyone.

Also, do I have to have a GPS radio on both ends, or just the master?

Yes, I realize the price is not much more for Airfiber, but you also have to factor in the antenna, at least $100 more...

Thanks for the info everyone.

Also, do I have to have a GPS radio on both ends, or just the master?

ePMP does not support 30MHz channel widths at this time. PMP/PTP450, using beta firmware 14.2, supports 15/30MHz options depending on the band.

You do not need a GPS radio on both sides, just one.

The force 110 antenna is an excellent match for the airfiber 5-X for short hops too, btw.

umm, how short are you talking? And how do you mount the Airfiber to it?

Zip ties or hose clamps will hold the radio to the dish just fine. 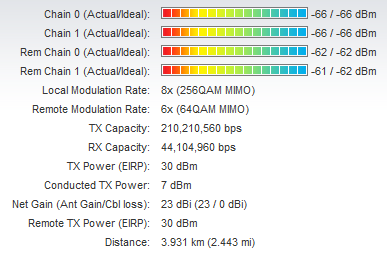 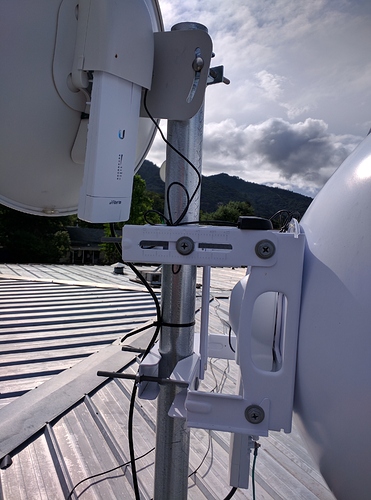 We have one PtP link using ePMP Force110, GSP-synced radios at east end.  Currently only 100meg ethernet at one end, gigabit the other.

TCP and UDP throughput tests between the routers at each end usually peg about 95Mbps up and down simultaneously, limited by the 100full ethernet link at one end.

I know this an old listing but I need some information.

I am about to (finally) try a Force 110 dish with a AF5X radio. I have read posts on ubnts site that the Force110 dish needs to be converted to slant45.

Is this true, or can I just attach the jumpers, radio and go?

There is no need to convert it to slant 45.  Just connect the jumpers, zip-tie  the radio to the dish and go.  The Force 110 dish is quite good.

OK, but if I want to pair it with a slant45 Ubiquiti antenna on the other end, it would need the conversion?

You may loose 3db of signal if you mix and match.