Sacred Wind asked Cambium to redesign their existing network to support up to 100Mbps packages as a paid service through Advisory Services. The design required 40MHz channels. The 40MHz channels pushed us into the 5.2 and 5.4 bands where we needed Medusa for the improved link budget on the uplink to support customers already connected in the 5.8 band.

In all the customer added 30 PMP450m APs to five of their towers. This was the most unique. It was originally a single telephone pole on a hill with 4 PMP450m APs. When we made the recommendation to add 8 more PMP450m APs, the customer had to improvise on some way to mount all of the APs. They came up with this solution. (Two APs have not been added yet.) This site supports around 400 customers today. Link Capacity Tests show as high as 750Mbps for a single AP. 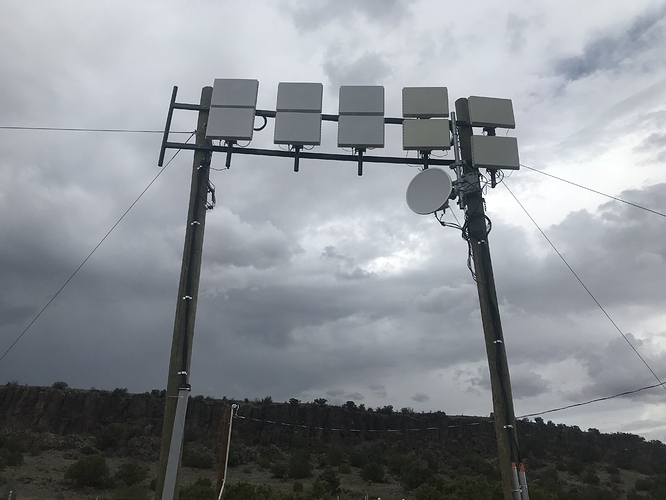 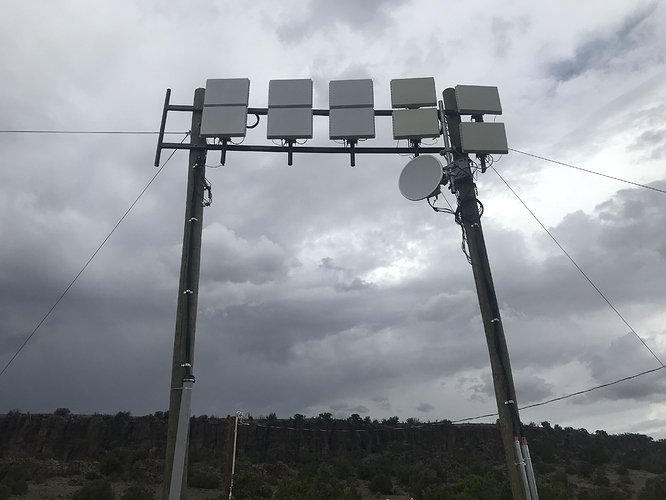 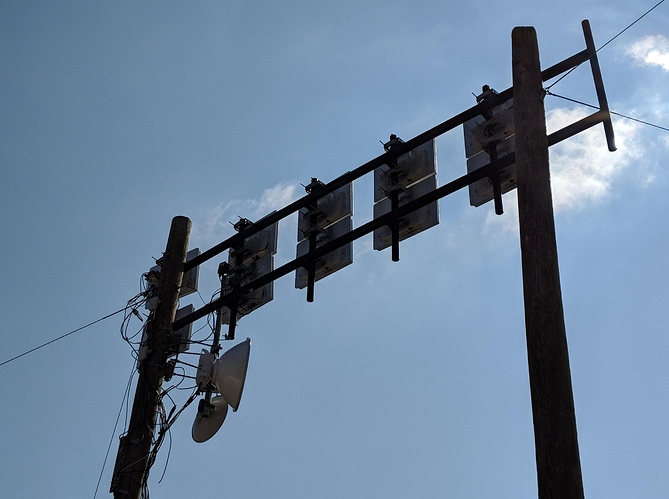 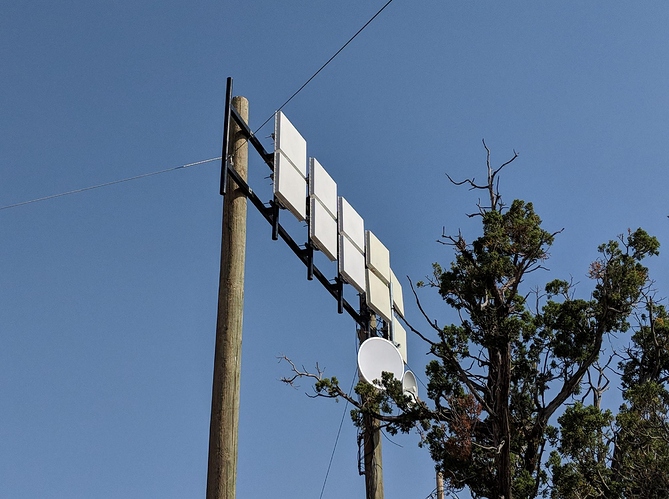 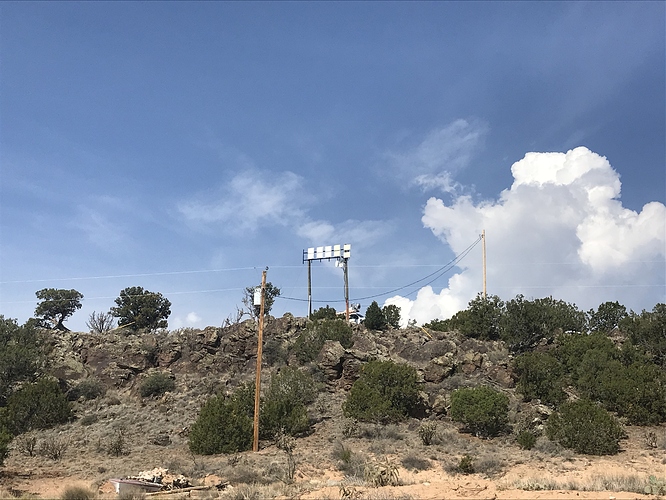 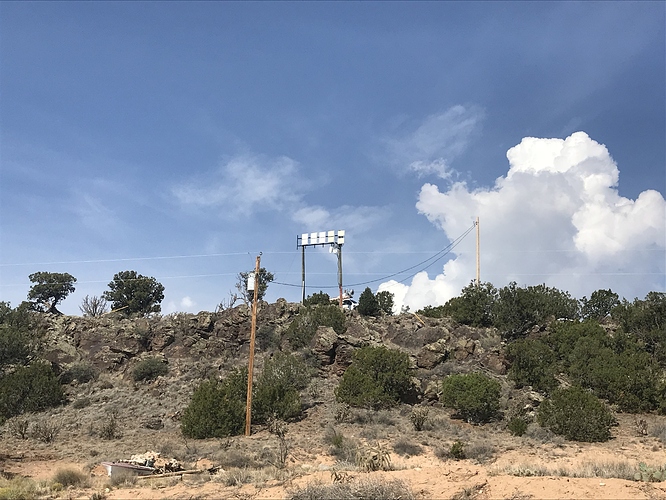 Wow talk about the power of GPS Sync!

how many clients is connected per base station?

are they residential or business customers? or mix?

What big is ARPU?

How big is cell size?

How is it backhualed, via fiber or radio?

Great example of the effectiveness of Cambium advisory services! Thanks Seth!

GPS Sync would do almost nothing in this scenario.  Its for front to back channel reuse...

So in this case without GPS Sync we would have needed enormous guard bands between each sector. Theoretically 2X the channel size (40MHz)...so 80MHz of guard for every 40MHz used.

Without GPS Sync we would have never been able to design twelve 40MHz APs all facing the same direction all in the 5GHz band.

Link to some of the speed tests the customer is now seeing.

What is the average distance to customers?

Are these all users with 100Mbps packages?

How much frequency spectrum did you use for the whole site?

Cambium, do you think using ePMP is possible to offer 100Mbps packages to users? In which scenarios? Obviously I'm not speaking of such a high density site because there isn't 7x7 on ePMP, but something alternative in a small density site.

Yes, that is around 35 users per AP. It's worth noting that we modeled the design without any consideration for MU-MIMO. The real reason for using PMP450m was for the improved uplink link budget in the DFS bands from the beamforming that the PMP450m can do. In theory a PMP450m should be able to load more users than this and still achieve the desired speeds, but it depends on which SMs in the sector are demanding traffic at any given time.

All users are not guaranteed 100Mbps packages. We needed a way to insure that poor performing SMs would not drag down the sector. We advised limiting the speed plans based on modulation rates. We designed for the following speed plans:

(But in general we discouraged 1X and 2X customers and for most of the other towers in the network retained 5.8 sectors on 20MHz channels to offload poor performing SMs.)

This whole site technically uses 10 x 40MHz today, but using the wider channels leaves unused gaps in each band. (That is to say the 40MHz channels do not fit perfectly in each band.)

It's also worth noting that if someone is a current PMP450i customer and hasn't jumped to PMP450m yet then they can try this technique of using the PMP450m in DFS bands for the greater ranges and purchase a PMP450m limited (which has MU-MIMO turned off but the beamforming is still enabled.) MU-MIMO can be turned on in the future (as needed) with a license key. It also has a 30 day trial as well.

I believe this could be done with ePMP but there are some differences that the operator will have to consider.

2) PMP450m has significantly more uplink beamforming gain than PMP2000 so overall range may be decreased as the DFS bands tend to be uplink limited in link budget.

With that said I think everyone is excited to see the amazing advancements that the ePMP team is doing with ePMP3000. With that platform I believe this type of design will be significantly easier.

Thank you for your great answer!
What upload speeds are guaranteed to each user?

What difference there is in gain between PMP 450m upload beamforming and ePMP 2000?

I currently offer 30Mbps max on ePMP 2000 on 20MHz channels when users are MCS14/MCS15 (64QAM, equivalent to 6x on PMP 450 I think), and 40MHz usable channels are very very rare. I'm curious about new setup to have more density in the same area with higher speed, but our area is not so profitable to use 450i/450m platform.

I'm very curious about ePMP 3000, why do you think this design will be easier?

If I am not mistaken ePMP3000 will offer 4x4 MU-MIMO, so theoretically better ability to beamform on the uplink plus MU-MIMO for increased throughput. And also it will offer larger channel options as well.

I kind of expect that the graph would be a little underwhelming. This was engineered very conservatively. Every AP should have 100Mbps available(unused resources) during "normal" peak usage where the customers on average are pulling 2Mbps each.

This allows for someone to do a large atypical download and still be guaranteed the 100Mbps that they are paying for. So I would be surprised if frame utilization is above 50% for any of these sectors.

But maybe the customer can weigh in with more input.

Most of our frame utiliation is around 20-30% which is how it was deisgned. That being said I had stopped (oops) monitoring that back in the day where the frame size on the 450m was being impleminted properly. These days I'll need to re-add those OIDs to my monitoring to keep an eye on it.

That being said after we did this roll out it's been great and I should've listened to Cambium an deployed 12 of the 450m APs and not 10... I'm going to have to go back and install the addtional 12 just to keep up with demand before we stop serving new customers off of this site. Not a bad problem at all to have but still a problem if you know what I mean.