SAS assigning channels on top of you?

Please provide any comments or guidance on this topic.

We converted our first  Part 90 location to CBRS because of heavy interference even in rural TX from wild-wild-west operators who were dropping old 3.65 GHz gear around coupled to a new LTE operator and oil companies who flat out refused to frequency coordinate under the Part 90 rules.

Our system worked splendidly at first, but in the past few days, subscriber are starting to complain on slow speeds and drop-outs.   We had two PMP 450 AP with external Cambium sectors mounted on opposite sides of a tower and both were granted by Federated Wireless a 20 MHz channel at 3580.

Upon doing a spectrum scan on both sectors, we were surprised and concerned to find what looks to be a very strong interfering station hitting our sectors with -60 dBm plus energy which does a job on a PMP 450 sector.

I copy both scans below.

Is there any mechanism to escalate to Federated Wireless (I put in a support case to Cambium already)?

Has anyone seen or experienced this situation before?

Are we misunderstanding the way a SAS works and expecting too much?   I am not surprised too much to find

some noise in GAA but getting a grant that doesn't support a reasonable level of performance less than 2 months into CBRS is more than a little concerning. 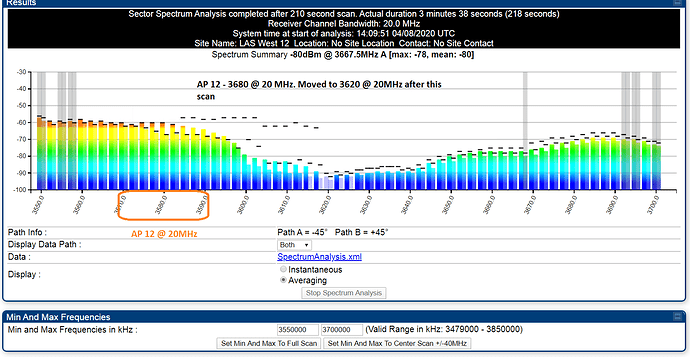 Unfortunately, you may be running into the same situation with 'wild-wild-west' operators. Most LTE gear, and even Cambium gear can be configured to use these CBRS channels without actually using a SAS. Even more unfortunate is that you can't query the SAS to see what other operators or AP's have been granted licenses around you. The SAS is also blind to operators that aren't using it, so there's a good chance they'll assign you a channel right on top of an illegal operator.

From the SA you're showing, it appears as that whomever has setup shop is actually using spectrum outside of the CBRS allotment. It looks like the peak is at 3550. It's very strong, so it would have to be an AP very close to you, possibly on an adjacent tower or nearby site. You very well might need to do a little investigating with a spectrum analyzer and figure out who's operating on those channels and report them to the FCC.

Currently the SAS only protects incumbents, not other GAA devices. Assume there are no incumbents in an area; if a device asks for a channel it will receve a grant for that channel; if another device asks for the same channel it will also receive a grant for the same channel. In the future the SAS will run interference calculations between GAAs and eventually recommend a different channel, but that does not happen yet.

You mentioned you are using Federated Wireless as your SAS provider. They have shared with us a procedure to address interference issues. Please open a ticket with Cambium support and Cambium will share the details of the process.

Thank you very much.

I suspected as much since I know from first hand experience with some WiMAX gear from a (now) deceased vendor that one could basically assign it anywhere you'd like across a huge band.

I'm well past being naive about these things not to be surprised that individuals are unscrupulous enough to just drop their gear into the spectrum figuring that there would be enough GAA hanging out that they could get away with it.

real cash and will expect something in return.

I mentioned in the OP that we choose this locale specifically because the Part 90 band was such a jungle.  We have names and strong suspicions of who was doing what to whom on which tower.  That's enough for a public forum.

I will see what Cambium says in our support case.   We ARE paying them real cash now for services.  They of course can't do anything about rogue operators but I am curious if Cambium can get more information from Federated or get assistance in advising the FCC and helping its customers formulate how to contact the FCC directly.

Interesting time.  Curious if any other operator has encountered this.

Oh, thanks.   That is certainly news to us that the current SAS functionality does not have the concept of looking around and seeing what's going on.

That's a more benign explanation than attributing this to rogue operators...not that I wouldn't put it past some of those guys.

I did in fact open a support ticket with Cambium a few hours ago and included the scans and the gist of what I posted in the OP.

I figured Federated and the others would have some type of way to handle these cases.  Given the size of the industry's investment in making this whole thing work, they're going to be right on top things before it gets out of hand.

Yes, Federated has a process to handle these issues, but it involves some manual steps until they are ready to fully automate the calculations. Cambium will respond to your ticket with the details on the process.

So currently GAA users on CBRS have no interference protection between each other? Do Federated and Google both operate this way currently?

Correct, currently only incumbents are protected by the SAS, not GAAs.

Yes, both Federated and Google operate in this way. Federated indicated they will support a first version of the co-existence feature (which will account for interference between GAAs) by July.

It's worth noting that ALL SAS adminstrators are operating this way at this time. Things change as the WinnForum rules (which govern the CBRS regulations) evolve. They are calling the introduction of "Coexistence groups" SAS 2.0.

As Lucia states, we are hearing that these rules will be introduced late summer or early Q3.

Well, it is what it is - as the saying goes.

Part of the issue, we found out with the help of one the great Cambium support team, was an operator very close to our location had dropped a 40 MHz wide channel down -- with the center frequency **just below** the lower end of the CBRS band.  That wiped out the bottom of the CBRS band for us.  We moved up and found some clear air and things are working very well.

Clearly any SAS didn't authorize that one!!