Can u pls explain me which channels are lowest intereference level ? I do , survey with Force180 Spectrum Analyzer for outdoor 5Ghz Channels Planning ? Pls check my attached photos and explain me pls ??? 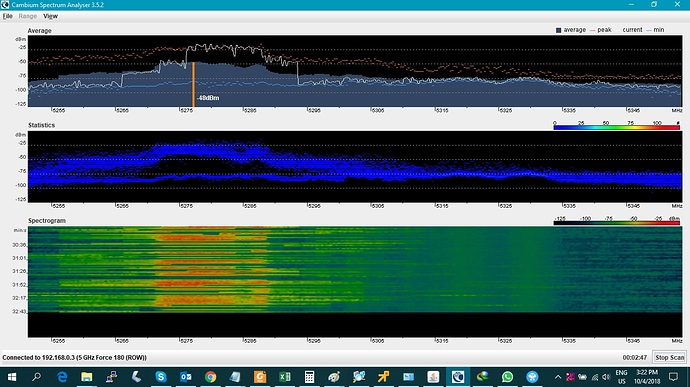 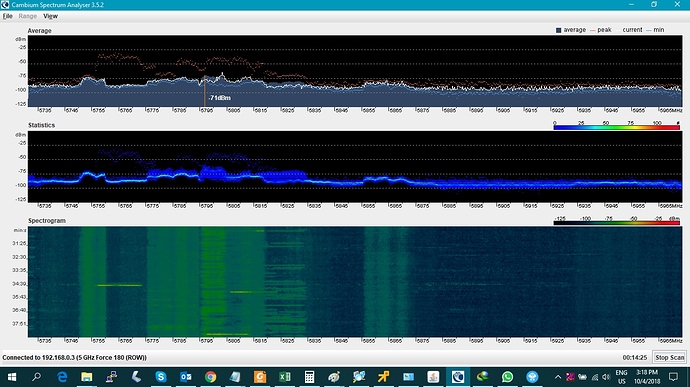 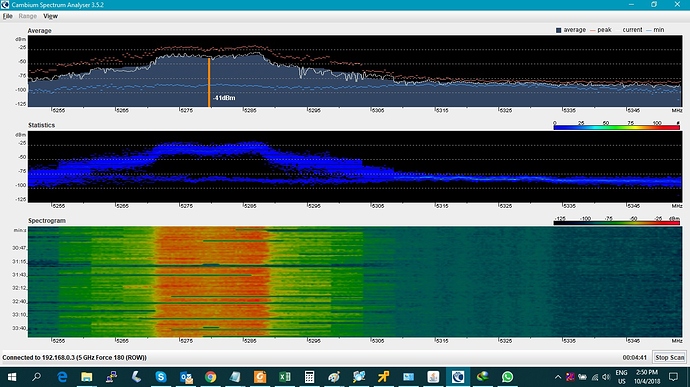 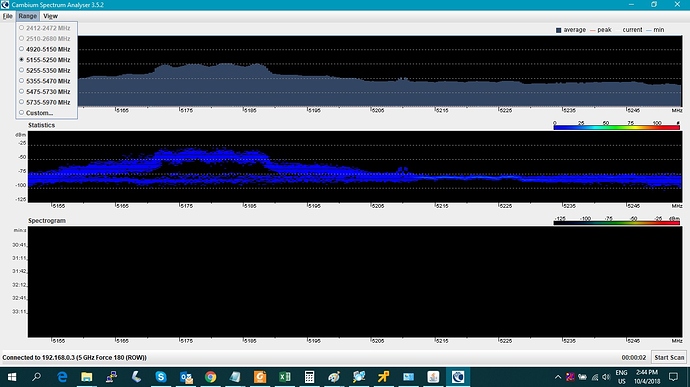 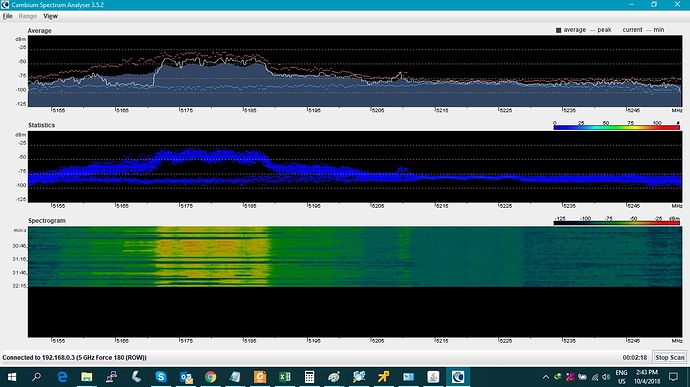 The graphs are three representations of the same data.  The 'Average' graph shows the lowest, highest, current, and average signal level seen at each sampled frequency since you started the scan.    The 'Statistics' graph simply plots a single pixel marking signal level at each frequency, then adds more pixels on subsequent scan cycles, so that eventually they build up to what you see.

Both of these can be generally read as "higher on the graph is higher signal is worse interference".  The 'Statistics' graph uses color to reflect repeated results - IE, if you see -74.1dB at a given frequency every single time, the pixel representing that sample will start dark blue (see color-code key at top right of graph) then get paler blue, greener, yellower, redder as more samples draw on the same pixel.

The third graph, 'Spectrogram', draws one horizontal line for each scan across the spectrum, and represents the signal level by color.  Over time it builds up a visualization of about the past 8 minutes worth of samples, with the most recent at the bottom.  This one lets you readily see intermittent interference, and is sometimes helpful if you're running a SA at the same time you're turning off radios on nearby towers to try to find an interference source.  (though it's worth noting that an AP running with GPS sync WILL show up as an interfering signal but if all radios are configured correctly SHOULD NOT actually interfere with another GPS synced AP)

Now if you're looking at the attached graphs trying to find your best-choice channel, it depends also on what the use is (point to point vs point to multipoint) and channel width you require.  For example you have a pretty inviting spot for a 20-MHz wide channel centered on 5845 where the noise floor appears to be around -85dB to -90dB, but if you require 40MHz that would overlap interfering signals to either side that appear to be 10-15dB stronger than the interference from 5835 to 5855 - might be perfectly workable (PtP at -55dB for instance) or might prove unworkable (PtMP with some clients in the mid-high -70s) depending on the situation.

I don't know what regulatory limitations apply to you, so I can't advise on what channels are 'good' or 'bad' per these graphs, but it's necessary to consider the max transmit power and max EIRP limitations in some regions at various frequencies as well as what interfering signals you see.  (In US/FCC, for example, -75 interference might be easily overcome at 5815MHz with the allowed 23dB max transmit power, while the same interference level at 5315MHz might be impossible to overcome with the 13dB transmit power limit)

Wow, what an excellent explanation Newkirk! If I could Kudo that twice, I would!

Another thing to keep in mind moekyawsoe, is that with any diagnostic tool, it’s only part of the big picture. It’s an excellent tool, but one of many pieces of info you need to take into account.

For example, one of our locations is near a rural School, and every Friday afternoon their network does a remote backup to the School Board office. So, we can do all the Spectrum analysis and testing we want Saturday through Thursday, and everything seems pretty quiet. When they aren’t transmitting data, it doesn’t really show up has anything obvious. But Friday afternoon from about 4 till 5 p.m. … there is a giant crimson swath across the waterfall.

Dear newkirk , Many thanks for your kind explaination .