Unwanted variations in the clock phase of T1 and E1 signals is known as jitter and wander. Jitter and wander are similar, but jitter is used to describe rapid variations in clock phase, whilst wander is used to describe slow-moving variations in clock phase. Jitter can be reduced fairly easily by regenerating the T1/E1 signal in a repeater. Unfortunately, wander is not so easily reduced, and network designs for T1 and E1 networks must take into account the gradual accumulation of wander as the signal passes though several nodes and links.

Wander could be a problem for two reasons: First, if wander is excessive, buffers in the system can overflow or underflow. Second, some systems (2G and 3G cellular wiress for example) depend on the T1/E1 connection for precise synchronisation.

The gold-standard for wander performance with E1 and T1 is defined in Section 6.2.4 of ITU-Y G.823 and Section 6.2.2 of ITU-T G.824 respectively. However, it’s really important to understand that these are limits for any node in a network. Wander accumulates, so the G.823 and G.824 limits represent the maximum permissible total wander of all the devices and links between a node and a primary reference clock. The wander contributed by one device or link must of course be only a small part of the total. Some manufacturers claim compliance with G.823 and G.824 for individual products that consume almost the whole of the network allowance; these products would be almost impossible to deploy in a network. It's always worth asking a few additional questions about a product that simply claims to comply with the ITU-T recommendations.

The excellent wander performance of the PTP 650/700/NIDU combination uses only a small fraction of the network wander limit. The figure below shows measured wander performance of E1 circuits on a non-line-of-sight PTP 650/700 link with NIDUs. Note that the measured wander is always at least one order of magnitude below the limit and at most points two orders of magnitude below the limit. This excellent performance allows you to build a complex TDM network with multiple hops and nodes, and still satisfy the needs of a fussy cellular Base Station. 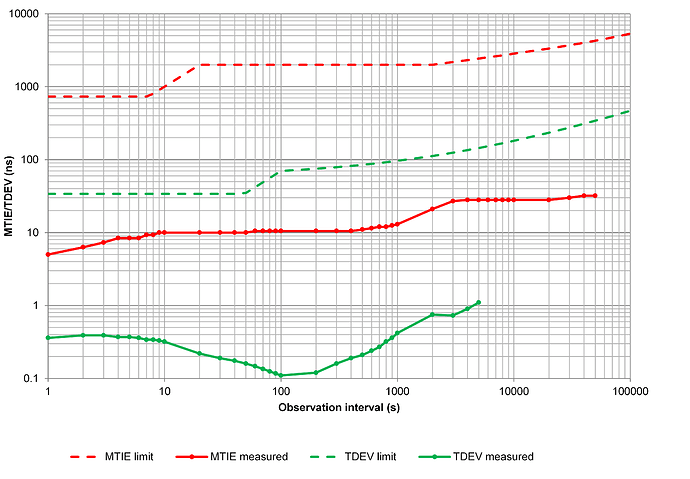