Throughput vs. Range - An Explanation

In any wireless communication system, two of the most important specifications are throughput and range. Throughput is a measure of the maximum amount of information (bits) that can be transferred from one radio to another in a unit time; range is a measure of the maximum distance between the two radios, with the communication link still operational.

PMP 450 is a 2x2 MIMO communication system (with two transmit chains and two receive chains), which supports the following modulations: QPSK, 16QAM, 64QAM and 256QAM. For each modulation mode, a MIMO-A option and a MIMO-B option can be selected.

With MIMO-A, the same information is transmitted by both transmitters. The communication channels between the transmitters and the receivers have different fading and multipath characteristics, and when a weighted average of the signals is calculated at the receiver, a combining gain increases the signal to noise ratio, possibly allowing the selection a higher modulation mode. MIMO-A is used to add robustness to the system and extend the range of communication.

Area covered by each modulation

Figure 1 shows an example of an AP covering a circular area around it with an omnidirectional antenna, or a portion (sector) of the area with a directional antenna. In this figure the modulation levels are labelled from 1x to 8x and correspond to the following modulation modes: 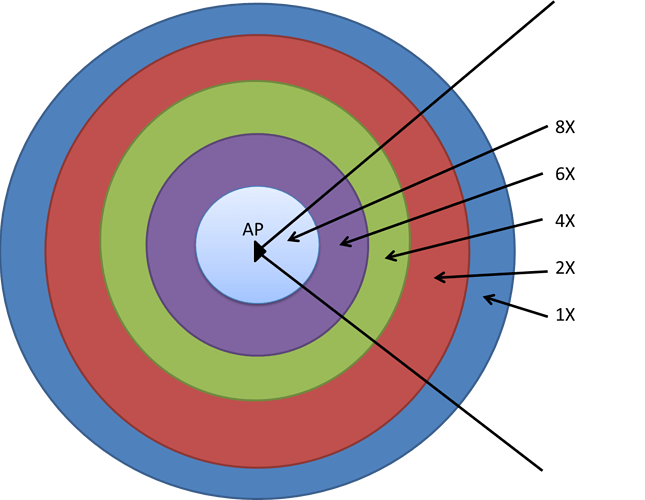 The radius of each ring depends on the link budget parameters, namely transmit power, transmit and receive antenna gain, receive sensitivity of the devices, and also on the propagation environment (e.g. line-of-sight vs. non-line-of-sight propagation).

Because not all SMs communicate with the AP at maximum throughput, the average throughput experienced by the AP will also be lower than the maximum value. The average throughput of the AP (or capacity of the sector), depends on the number of SMs communicating at each modulation level, and the amount of traffic generated by each SM. If all SMs generate the same amount of traffic and the SMs are evenly distributed in the covered area, the expected sector capacity can be calculated using the ratios of the areas of the rings over the total covered area.

When configuring an AP, the maximum range is defined for a sector. This parameter indicates the distance between the AP and the farthest SM served by that AP, and it can be shorter than the maximum range that could be achieved based on the link budget parameters and propagation environment.

This range value is used for example to configure the frame, in order to allow enough turnaround time between transmit and receive modes, for the signal to travel to the farthest SM and back to the AP.

6 Likes
450 AP Performance
450 Frame utilization and performance issues
PMP 450i 900Mhz
Slow Speeds
Problem with a new site - PMP 450 Medusa
I would like to know about PMP 450i for multiple NLOS SM scenario ?
Understanding Link Status results on PMP 450 SM