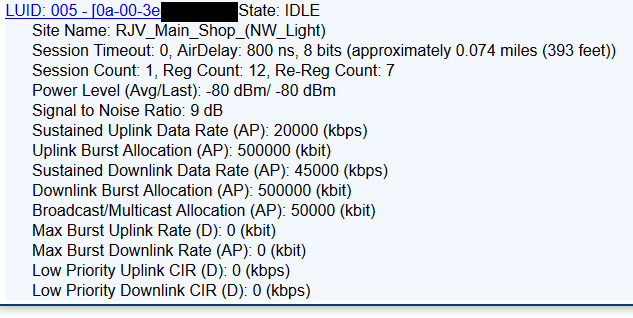 While posting this, the SM connected, but then disconnected.

I would recommend increasing your SM Receive Target Level to something like -55dBm. The IDLE SM shows a SNR of only 9dB. (A fluctuation in the noise floor of just a few dB will likely knock it off the network.) I think you need at least 7dB just to connect, but ideally you would want this value to be at least 32dB in a perfect world.

Thank you for the suggestion.

I have been playing around with -40 to -80, with no difference in that SM connecting.

Are there any other settings you would like to do to help us make a better settings change?

I don't see anything else out of the ordinary from what you have posted here.

here it is with -55 as you suggested.

I would guess from this last screenshot that the culprit is the low SNR on the downlink.

Again 7dB is the minimum needed to keep a connection.

A higher gain antenna on the AP side or SM side should fix this problem.

What firmware version are you running? Is this PMP430?

Here is the wireless system after the weekend.

It's weird, because sometimes the radio works fine, as it does here.

I believe the firmware versions are:

I would strongly recommend upgrading to version 13.4.1.

There are several years of bug fixes and upgrades compared to the 12.1.2 and 11.2 you are running today.

Okay, I will do that. Would you recommend switching to AES vs. DES too?

Where do I get the firmware?

Okay, I will do that. Would you recommend switching to AES vs. DES too?

Where do I get the firmware?

Unless you have radios that have AES licenses applied to them... use DES.

You can find the firmware HERE.

How do I know what licence my Canopy Radio is running?

I was able to find a free version of CNUT... I added the package manually.

It won't update any of my devices...

-This Firmware seems to work

I have upgraded all radios to 13.4 DES, as I was told I can't upgrade to AES.

Same thing happens, NW tower doesn't want to connect. But now I see 5DataVCs? Should I change a setting?

The "extra" VC's are from enabling the High Priority channel on your subscribers. It likely will not affect your setup either way. You can disable them just to keep things simple.

The SM Receive Target Level for the AP should be stronger than -75 dBm. Set it to -55dBm and leave it there. (This is probably not your original problem, but it WILL cause an additional problem if this is set wrong.)

Did all of the radios update through CNUT? Or just a few of them?

Also if this is a system that had been working in the past but is not now, have you done a Spectrum Analysis to ensure you are on the cleanest channel?

Additionally it may be a good idea to double-check the cabling for that one SM to make sure that something has not happened. Is it possible that the SM is disconnecting because of power/cabling issues? You should be able to check the SM's uptime to make sure that it is not rebooting causing this problem.

The SM works does not have any physical issues. Just seem like some days it works others it doesn't.

I can't run a spectrum analysis on this SM, because it's not even connected long enough for me to do that.

Here's a Spectrum An. from the NE SM.

I think the next thing I would try would be to swap two SM's to see if the problem stays with the SM or not.