Looking at options to eliminate Ethernet issues we are having on an FM tower. I am going to run fiber up but have not figured out what I need at the top to power the AP.

One option is the newer Netonix WS-8-150-DC switch but I have not found a tower ready enclosure that would work 100' up.

Are you aiming to just feed one radio or multiple?  If you are looking to power multiple radios with a single run and want a smaller tower footprint you could look at the Edgepoint 16 port unit or a combination of the Fiber POE and a Netonix WS-6-Mini .  The 6 Mini will happily take power in on 4 pairs.  That said, the WS-8-150-DC isn't very big.  There are many smaller NEMA enclosures it would fit in.  I assume windload is the biggest issue?

In this case, one radio. I am already heavily invested in Netonix so I'm hesitant to switch to an EdgePoint though the form factor is excellent. I've not had great results with UBNT in the past.

Wind loading is the issue. On top of a mountain.

In this case, one radio. I am already heavily invested in Netonix so I'm hesitant to switch to an EdgePoint though the form factor is excellent. I've not had great results with UBNT in the past.

Wind loading is the issue. On top of a mountain.

I absolutely get you on wind load and the less "stuff".  I have a few dozen of the smaller edgepoints deployed without a single problem.  They won't work for the 2000 series though, as they will only do 24v.

The 8 port switch was designed for FM sites specificly. The easiest cleanup is to put your switch and radio inside a steel Nena box. Use 1’ jumpers on inside of your box to make ports drilled through your box so your cabinet is like the radio housing and add another pair of jumpers to the antenna.
You of course do loose a DB or two when doing that RF side, but will completely clean up your Ethernet problem. You’ll have to ground that top box very well. 6ga or better home run.

Another option is the aluminum outer armored FTP shielded Cable from Belkin. It’s about $3/foot if I remember correctly and the entire cable has an aluminum outer shell and the braided shield inside. I’ve read mixed results using filters on the cable. Netonix forums has a page filled with stores about resolving this issue. (I’ve personally put them in a cabinet and grounded it with the antenna ports as the method out of the box, worked flawlessly. )

Chris, we have tried the ferrite beads on both ends of the cable. That worked for a while. This tower seems to add an FM translator every couple of weeks and the ferrites no longer help. I have heavily shielded cable, I installed metal conduit for the cable and I also ran #4 ground wire up the tower to make sure everything is well bonded.  All those helped for a while but more FM keeps getting added.  Ugh.

Something new was added yesterday and one of our 2000 APs downgraded to 100M on the Ethernet link and throws pause frames to the switch when traffic gets above 40 Mbps.

I think the 8-port DC switch is my answer. Just need to find a NEMA enclosure that will house it that is not too large of  a profile.  Was hoping to find someone on the netonix site that has done this and could point me in the direction of the enclosure they used.  Really want the small ws-6-mini switch enclosure for the 8 port DC switch.

I order a lot of cabinets from there.  i'm sure they could get a box just barly large enough for you.

Is the CAT5 cable double shielded? (foil AND braid)? I found that foil only cable will cause problems at FM sites.

It also depends on how much power the FM is running,(look it up on the FCC database in the USA) and proximity to the FM antennas. the more distance from th eantennas the better, although I have successfully got a radio to work IN BETWEEN a stack of FM antennas with double shielded cable and RF chokes, though power was only a couple of kW from the transmitter, and I wouldnt recommend it if it can be avoided! (I was a radio station engineer in a former life) Also locating your equipment directly vertically below a stack of FM antennas is better than a small vertical offset, as the antennas are designed to null rf directly up and down. On the ground use all shielded Cat6E patch cables also.

CAT5 is double braid, no foil. Carrier grade CAT5 designed for towers.  It's in metal conduit (LiquidTight) the entire way from switch to transmitter with just enough exposed to put a handful of Ferrite beads on.  It's also well grounded top and bottom (the Ethernet ends).

The tower owner keeps putting FM dipole antennas all over the tower - a couple right on my gear. They are low power FM translators (under 300 watts) but they multiply like rabbits up there.  They added a new one recently and now I can't get one of my 2000 APs to sync better than 100M on the Ehternet and it throws a ton of pause frames when it gets busy.

I can't keep climbing the tower to fix stuff. I think running fiber up and going with 2' extension cables of good double shielded and grounded Ethernet from the switch to the APs is about all I can do - other than get off the tower since the owner could care less about his interference.

I'd say it's the dipoles right on your gear is the main problem, rather than RF getting into the CAT5, as it sounds like you have it well shielded.

Grounds have little effect at FM frequencies unless they are, straight and short (a couple of inches max) and made of  flat copper tape. FM RF will only travel on the outside of a shield (due to the skin effect).

If you can't get co-operation from the owner to keep FM dipoles at least a couple of wavelengths away from your gear (wavelength of band II FM is around 3 metres / 9 feet), you could try to get him to combine a few FM's into a master antenna system, which can be done for a few K and would most likely aid the fm signal as well as maximise his tower real estate.

If not, sounds like a move may be on the cards, or how about forcing the ePmP network ports to stay at 100Mb, and see if it helps the pause frames,  after all you don't really need above 100Mb per sector, as max throughput is normally just under that on a loaded sector is it not?

As soon as it gets warm enough, I'm moving my gear for the 3rd time on that tower to get away from FM antennas. I have a new spot picked out where at least he can't get above me and I'll take up some room below me with the NEMA enclosure for the fiber switch to create at least a couple of meters of spacing.  It's pretty frustrating to have to climb up a 100' tower every few months and move gear that has stopped performing well

We have pushed right up to 100M on this antenna so I'd really prefer the 1Gbps link but it is what it is - as they say!

I am experiencing the same issues on one of my towers. What did you do to fix your problem? Did you run fiber up the tower, if so, did you use the UBNT FiberPOE?

Still in the process of finisheing this (due to fiber delays and then wind).

We ran 2-pair fiber up the tower and installed a Netonix WS-8-150-DC swith in an enclosure at the top of the tower. We are then powering all three ePMP APs from that new switch. So far, I have 1 of the 3 radios moved over to it - we are taking this opportunity to clean up the install and consolodate radios to one location.

However, it has been working just fine. We ran 2 pairs of fiber up since the cost of 2 was the same as 1 pair and this allows us redundency is case something fails.  We are powering the DC switch with a 24v converter at the bottom of the tower.

Here is the switch at the top of the tower: 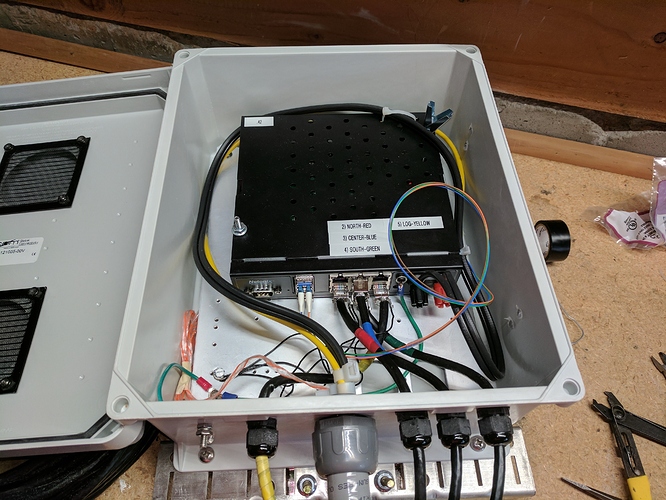