Does anybody know of a POE powered heat strip that could be applied to a V3000 dish?

We are in Northwest Colorado and got well over a foot of snow last night and we have a few V3000 connections that have dropped completely because they are covered in snow. Doesn’t help that the dish is shaped like a snow shovel… I’ve not been able to find a product that meets our needs. I found Hot Shot Dish Heat, but those circular heaters don’t seem like they would work with the V3000.

Longer term we hope to get the mesh network built out in these areas and pull as many V3000s off the system as possible but given our topology we won’t be able to get away with only using V5000 and V1000 radios.

not sure about poe powered due to heat available being a function of current and resistance, but if you dont mind running a power cord up to the dish then the large 12v semi truck mirror heaters work well and you can find lots of hot pads for 3d printers available on ebay. Just make sure you add some back insulation.

Following this. I have been looking online for dish heaters as well and thought I might try to build a prototype. A 48v POE port should be able to power a small heater. It will not take much - just enough to keep snow from sticking to the entire reflector. My thought was to turn on the POE out port when snow was coming and then shut it off after the snow event ended.

We lost links as well that were short and this snow was very cold with a low water content. What is going to happen when the wet spring snows come? This reflector design needs to either be turned upside-down or a heater invented.

A couple of thoughts, one NeverWET may help, I notice hardware on the dish face, this will certainly aid in snow/ice retention. It has been a long time since I used the stuff but I did note some very frostfree dish faces at a site where everything else had an inch or two of hoar frost on it.
Buddy of mine put costco heavy duty garbage bags on his gear in the Kootenay mountains, ice/snow has a hard time bonding, and a light breeze makes it flap and shed snow. I was always alarmed by the notion of what a high wind might do though

First day on the new forum, can I get kicked off for suggesting a radome be purpose built and marketed as a Dumbrella™ ?

We have a V3000 today that won’t stay latched to the tower DN at 311 meters. The signal and modulation goes to absolute crap if you get even a small layer of snow on the dish. We purchased a spray on water repellant that we’re going to try tomorrow.

We can’t use trash bags in the few locations that we have these because it gets too windy - the bags would get torn to shreds pretty quickly, and I’m sure the customer doesn’t want to hear a bag whipping around on his house all day.

We purchased some black shrink wrap and are considering making a radome on the V3000 with that. We’re also considering mounting these things upside down, but we haven’t tested if it works yet. We’ll know tomorrow.

48v poe is 30w max. that is less than 1A and can not support the amount of power needed to de-ice a dish.
Satellite dish de-icers are usually 120v and still need 4 to 5A.

We use RainX on our exposed dish reflectors. its not 100% but it does work at reducing ice build-up. Also you can hot spray it to remove the ice, just heat the bottle to 60 or 70C and super soaker the dish! It replenishes the existing coating while it removes the ice.

Our dishes are on roofs that are not accessible in snow so getting at them after the fact won’t work. The rain-x and other spray on techniques need to keep being re-applied. Our desert sun dries that stuff out in a few days. We need a solution where we don’t have to keep accessing the dish.

With a heater, you don’t need to melt ice, you just need to keep it from ever forming. That means keeping the dish just above 1 degree C - the temp snow is created. So, if the dish can maintain 2 degrees C, that should melt each snowflake that hits it. 30w should be able to do that. On a -20 degree day, less likely, but most snow is in the -10 to 0 outside temp range.

Our second snow of the season knocked out 20% of our links - all V3000s with snow buildup. The V1000s had no changes in RSSI or power so they seem fine. Regretting swapping out Mikrotik 60 GHz dishes that had radomes on them. Never lost those links in snow in years. V3000s are a nightmare in snow.

This really needs a solution. The shrink wrap idea is interesting. Would love to see some photos and ideas of things that work.

can you wrap a dish in poly and see if that helps ?

we get snow any time below 5deg C if the conditions are right. your problem sounds more like freezing rain or the snow melts on contact then refreezes.
your still not going to be able to pull enough power out of a poe port but you can supply 30vdc to a stick on heat pad like a low voltage battery heating pad. Those would supply more than enough heat to melt the ice and still keep them on the back of the dish, out of the signal path.

In both of our snow events this year it was around negative 10° celsius. The snow was 3 to 4 inches in total accumulation on the ground. It was cold enough that the water moisture was almost non-existent in the snow. We could have cleaned our sidewalks with a leaf blower instead of a shovel. However it took out a number of our links. As soon as the snow either blew off or slid off the next day the links came right back.

We aim our links using RSSI and power output. We pay more attention to power output and get that as low as possible. The automatic adjustment always keeps RSSI at about -62 so the power numbers are more useful for aiming.

These are well aimed and 4" of dry snow killed 20% of them. I know that cambium is well aware of this problem and are working on some possible solutions.

Building the entire radio so the reflector was on top instead of the bottom would have probably been a better design than the way they chose to do it.

Funny, we do use a leaf blower to clear the walk outside, just cant do that on a coastal/great lake side area.

Yeah, flipping the reflector system upside down would definitely improve the accumulation issue, sometimes the best ideas are after manufacturing! The scoop design should always be ground facing, that they should have remembered from the Motorola days with the offset reflectors for the Canopy backhauls!

Power trimming for aiming is a very good way to ensure peak performance, we do that with our links too. RSSI is only valid once you have an idea of the signal edges and can be very certain that its not a side lobe, though at your link distances that normally wouldn’t be a problem, Once your sure its the main lobe it is the only way to know if your aligned correctly.

Anyone tried heat shrink bags yet on these? I just ordered some different options online to test. We get our links knocked out almost every time it snows. Time to build a DIY radome.

I’ve also ordered some flat rolls of shrink wrap to wrap a couple of times vertically. Just need to keep the snow from trying to stick…

We ordered heat shrink wrap on Amazon and tried a few ways to wrap the dish and couldn’t come up with a solution we felt comfortable deploying. Between that and the trash bag they both would just get destroyed with our snow and wind loads. We have coated some of our V3000 dishes with NeverWET and placed a non-sprayed dish next to a sprayed dish on a bucket pole mount for testing. Snow would still build up on the dish but it melted off considerably faster than the non sprayed dish.

Well, I just sprayed a few radio reflectors with Scotchguard for snow and rain. Next 36 hours will tell me if that works at all. I can’t do a trash bag at most locations - that would be, well, trashy and visible to the building owner. Nothing instills confidence in your ISP like a trash bag taped to a radio.

We are 5" of snow into this storm and most of our v3000 links are down. The v1000 links don’t show a single change in reception or power. The v3000s ramped up power as the snow fell and then rssi dropped until the links dropped. These radios are not usable in a snowy environment. Every time it snows more than 2 or 3", we loose at least a couple v3000 links. Some are v3000 point to point and others are clients on v5000s.

I am wondering if the v3000 can be mounted 90 degrees on the mounting bracket and used in that configuration to a v5000? That would at least protect the shovel from filling up with snow instantly.

While talking to a Cambium engineer he mentioned it wouldn’t work at 90 degrees. We tested mounting a V3000 upside down and aiming it towards a V5000 and it worked great but admittedly didn’t try 90 degrees. Our major concern with mounting upside down is water getting into the port holes. We ordered some 90 degree cable glands in the event that we do need to mount some upside down.

We’re unfortunately succumbing to the idea that we have to deploy as few V3000’s as possible as we build out the network, meaning a considerable amount of V5000’s in the final plan, which obviously makes the deployment way more expensive.

Thanks and nice to hear from another local! I considered upside-down but was also worried about water getting in the glands. I don’t really trust them at 90 degrees. I figured 90 degrees would be an issue with the polarity settings but anything is worth a try at this point.

Where did you get 90 degree glands that fit these radios? I am willing to give this a try at a couple sites. 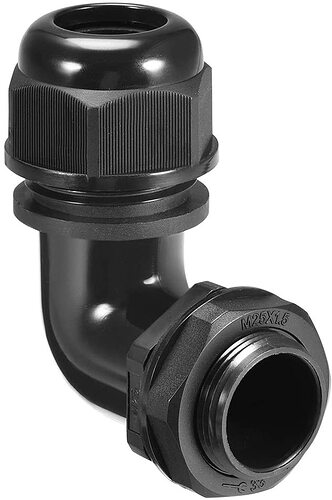 We just got them in, I’ll check fit tomorrow when I’m at the office.