The radios support VLAN functionality as defined in the 802.1Q (Virtual LANs) specification, except for the following aspects of that specification:

As an additional exception, the AP does not flood downward the unknown unicast frames to the SM.

A VLAN configuration in Layer 2 establishes a logical group within the network. Each computer in the VLAN, regardless of initial or eventual physical location, has access to the same data. For the network operator, this provides flexibility in network segmentation, simpler management, and enhanced security.

With the supported VLAN functionality, the radios determine bridge forwarding on the basis of not only the destination MAC address, but also the VLAN ID of the destination. This provides flexibility in how SMs are used:

PMP modules provide the VLAN frame filters that are described in Table 54. 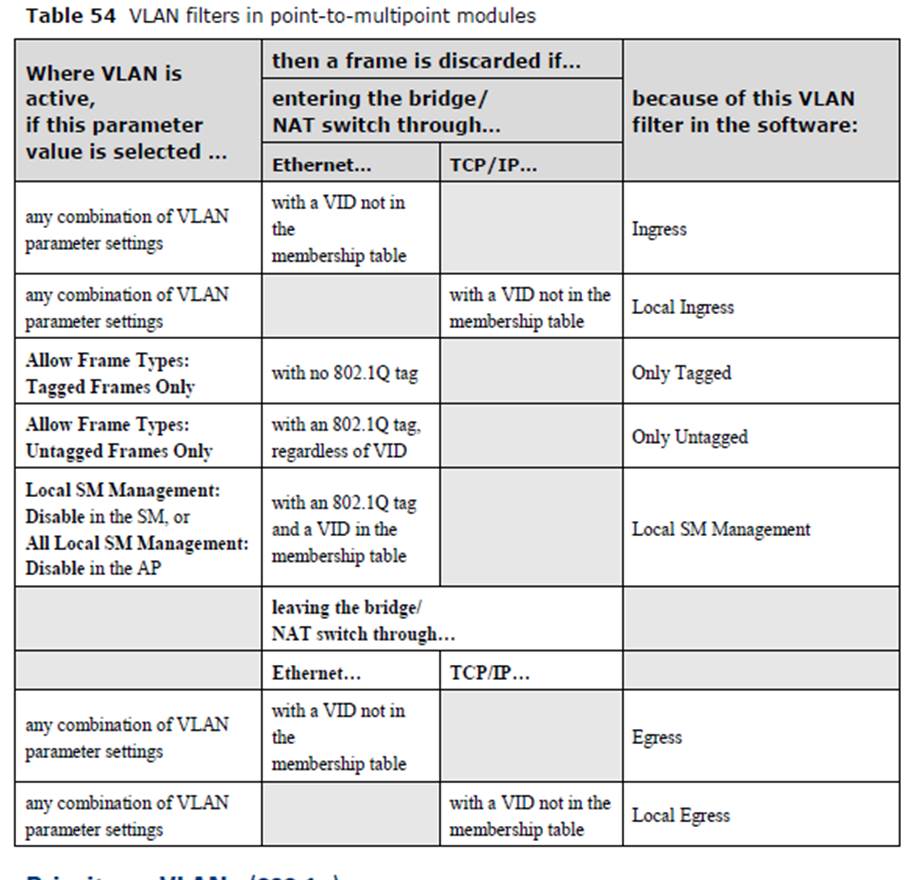 VLAN settings can also cause the module to convert received non-VLAN packets into VLAN packets. In this case, the 802.1p priority in packets leaving the module is set to the priority established by the DiffServ configuration.

If you enable VLAN, immediately monitor traffic to ensure that the results are as desired. For example, high-priority traffic may block low-priority.

PMP modules can be configured with 802.1ad Q-in-Q DVLAN (Double-VLAN) tagging which is a way for an operator to put an 802.1Q VLAN inside of an 802.1ad VLAN. A nested VLAN, which is the original 802.1Q tag and a new second 802.1ad tag, allows for bridging of VLAN traffic across a network and segregates the broadcast domains of 802.1Q VLANs. Q-in-Q can be used with PPPoE and/or NAT.

The 802.1ad S-VLAN is the outer VLAN that is configurable on the Configuration => VLAN web page of the AP. The Q-in-Q EtherType parameter is configured with a default EtherType of 0x88a8 in addition to four alternate EtherTypes that can be configured to aid in interoperability with existing networks that use a different EtherType than the default.

The C-VLAN is the inner VLAN tag, which is the same as 802.1Q. As a top level concept, this operates on the outermost tag at any given time, either “pushing” a tag on or “popping” a tag off. This means packets will at most transition from an 802.1Q frame to an 801.ad frame (with a tag “pushed” on) or an untagged 802.1 frame (with the tag “popped” off. Similarly, for an 802.1ad frame, this can only transition from an 802.1ad frame to an 802.1Q frame (with the tag “popped” off) since the radio software only supports 2 levels of tags.