What is everyone using for 200+Mbps and 6+ mile backhaul links ?

We are currently using a mix of 5Ghz Ubiquiti  rocket/nanobeam and ePTP for all of our backhauls . We have a 5.7Ghz ePTP link 40Mhz wide  2ft Rocketdish at the NOC and the ePTP dish on the POP sitting at around -55 RSSI(dBm) .This link has started hitting capacity during peak hours and I'm looking to upgrade it to something that can reliably deliver  250+Mbps at 6.7miles. I would like to use DFS channels for this link but the lower power restrictions  result in much lower SNR and thus lower throughput.

Most of our backhaul links  (this link included) are to a single tower next to our NOC and we struggle to keep from self interfering in the 5Ghz  as it is so just throwing in AC and 80Mhz wide channels isn't really an option.

So far I was looking at two solutions. The Mimosa  B5c which I could in theory simply swap out with the ePMP radios on the existing dishes so no re-aiming and very little down time. But , I can't really take advantage of the greater than 40Mhz wide channels so I'm not sure how much more bandwidth I would gain using the B5c AC stuff in a 40Mhz channel vs the ePMP PTP N stuff in a 40Mhz channel.

The second solution I was looking at was the Ubiquiti  3Ghz AirFiber (wich doesn't appear to be shipping ? and I haven't looked into when it is expected).  I've heard a lot of good stuff about Ubiquiti's AirFiber (it's greatness attributed to the designers being X Motorola people) and 3Ghz would sure give me some 5Ghz breathing room at the NOC.  But, I haven't really looked into the current/future rules of 3Ghz in FCC land so that may kill any plans of using 3Ghz AirFiber.

What is everyone else using for 200+Mbps 6+mile backhauls ?

I will recommend you to contact the Cambium sales or your local cambium reseller to first plan the link  so that you will get to know the exact thourghput that your link is going to get. Yes the PTP 650 radios are designed to give a throughput of 450 Mbps (Full License) however as you are aware that it depends on what the interference in the sites and other factors. If we go by the RSSI of -55dBm that you have given if i can predict that you will get more than 250+ Mbps butI will recommend you to contact the Local Cambium reseller or the cambium sales dept.  salesdev@cambiumnetworks.com for your queries on Link planning. if you prefer to try it your self then you can use LinkPlanner tool , you can download it from here https://support.cambiumnetworks.com/files/linkplanner/

for any other techinical query related to cambium products you can always contact the support at support@cambiumnetworks.com

This not the best place to say this but I would recomend Airfiber5x, straight away on those dishes and 200mbps (25/75) on 40mhz channel.

I would say ptp650 (from the bottom of my heart)  if your budget was arround 4k.

Sorry Cambium people, I love epmp1000 , but we just cannot afford your backhauls.

I do also have a few ePMP backhauls running 40Mhz where I can't justify the solar upgrades to support an AF5X or similar.  One such ePMP link is 11 miles, 2' dishes on both sides running also in UNII-1 that is good for about 185Mbps one-way.

If you don't already have a 3.65 license you can't get one, currently.

Mind if I ask what the SNR / RSSI is on this link ?  Also since you are doing a 75/25 split I assume you are using TDD PTP mode and not the ePTP mode ?  I don't remember the reason we thought ePTP mode was better... was it better latency ? Getting old, can't remember stuff...

Actually when the 3.65-3.7 Ghz first became available we purchased a License from the FCC I just never deployed any 3.65Ghz links.  As I understand it after you got a license you was supposed to register any 3.65 links wth the FCC but I believe now they plan to sell 3Ghz spectrum like all other spectrum and links already registered get some grandfathering for x years  but no new links can be resgistered ?   I'm only guessing that you can even deploy new 3Ghz links currently as you can't register them can you ?  But even if you can  when they start selling the spectrum we would have to take the link down if we don't get a license for it in our area ?

I need to get a better handle on exactly what is going on with that spectrum.

This is our issue with the Cambium backhauls (other than the ePTP). We can afford the links but I can't justify spending so much more on a ptp650 when they don't appear to offer any real advantages over other solutions, like   Mimosa or  Ubiquiti AF5X,  that cost less than 1/2 what a ptp650 costs.

Anyone care to chime in on what a ptp650 brings to the table that makes it worth twice as much as AF5X or Mimosa ?

The link in question is an AF5X.  Here are the specs though: 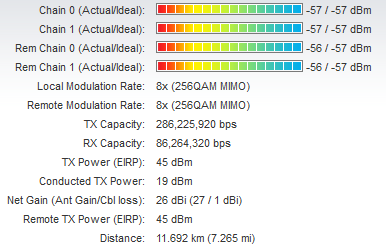 3.65 is still a bit up in the air, I'm not sure if the new rules are finalized or not.  If you already have a license you should be able to register new links (I think) but they won't have grandfathered status once the new rules go into effect.

Mind if I ask the SNR/RSSI on the 11 mile ePTP link that's delivering 185Mbps ?

This is our issue with the Cambium backhauls (other than the ePTP). We can afford the links but I can't justify spending so much more on a ptp650 when they don't appear to offer any real advantages over other solutions, like   Mimosa or  Ubiquiti AF5X,  that cost less than 1/2 what a ptp650 costs.

Anyone care to chime in on what a ptp650 brings to the table that makes it worth twice as much as AF5X or Mimosa ?

if you have a look at the link budget table, you'll see the differences, also these radios have dynamic hoping abilities to move away from noise as it appears,  so if someone doesn't check the spectrum before they power up a radio and it would KILL your link, the 650 simply moves and you'll never see a dropped ping or a disturbance in the traffic.  it so can use different RX and TX channels to deal with noise as well.      (you can block if from using specific cannel spaces too)     its radiation pattern is extremely sharp as well.    it won't bother near band radios as badly as other devices.

the AF5x in my opion isn't a good fit here, your growing, your going to out grow that small improvement fast. if your going to go unbt, go with an AF5.      the mimosa radios are decent, for the money great, but they don't code at a high rate and use up a lot of spectrum to deliver your speed.   both the UBNT and the PTP 650 code better.

the AF5 allows for full duplex operation, and if you've got the room significantly out perform the AFx line.

if you've got noise, the 650 is hands down the way to go,   next i would select  a AF5 for its FTB, full duplex ability.   if an epmp or rocket link is running out of bandwidth, switching to an X doesn't buy you a lot, another 100 meg so your going to be upgrading this link again soon if your sales are good.