What is the maximum throughput you guys are seeing on Access points?

I know the PMP450 is designed for 100mbps+ total throughput, but what numbers are you guys seeing on a loaded AP with 13.4 software?

I know we are supposed to be in the range of 75down/25up at the best possible customer modulations and signals, but we seem to be falling short of this goal.

Have been looking at the AP calculation tool (spreadsheet) and is this the best performace we can expected with mixed modulation SM registration (2x, 4x, 6x, 8x) ?

Does anyone have better performance?

With 20mhz channels we see real world performance of 30-40 mbits on most of our aps. We have a few aps with particularly good signal levels hitting about 55 at peak.

While the PMP450 supports up to 120mbps net throughput, that is the aggragate rate for the radio, SM's don't have enough processing power to push anything more then around 70mbps in bridge mode, and if you're using any filtering, NAT, AES encryption, etc... you'll take a performance hit at the SM which takes you down to about 60mbps . Both of these scenarios are in a perfect/LAB enviornment with 256QAM/8X modulation on uplink/downlink.

Real world is closer to what Tim has quoted. Also keep in mind the aggragate throughput on the AP will be lower the more SM's you have connecting at lower modulation rates. You can tell if you're AP is hitting a capacity limit by looking a the 'Frame Utilization' statistic if you're using firmware version 13.4. Obviously, if you're hitting at/near 100% on the downlink and/or uplink, your AP is saturated and you'll either need to split the AP, increase the channel width, increase the modulation rate to those clients that have poor signal OR that have poor signal and are using the most bandwidth.

This is what we see with WIFI-Based Systems like ePMP too.

I think theirs also another issue somewhere that i cant get a response form Cambium on,

We're keeping our cells very small ~500m max (moving from wimax over), but something i've noticed is that even with all users showing at 8x/6x if i run a link test almost every single AP never has more then 1-2% 256qam (if you enable the rf link diagnostic during the test u can see).

And i'm talking every CPE has -50 to -60 RSL and is MIMOB, we're only starting now to deploy so only have 3-4 people on the sectors but we are hoping this is some kind of bug no way should a clean channel with -50 signal be giving modulation issues and nearly no 256qam

Hey Chris, are you seeing this issue on both the AP side and the SM side? I just checked some of our 3.65 clients and I see that on the SM side, it's able to get full 256QAM modulation at nearly the maximum percentage of 25% from the AP (downlink). 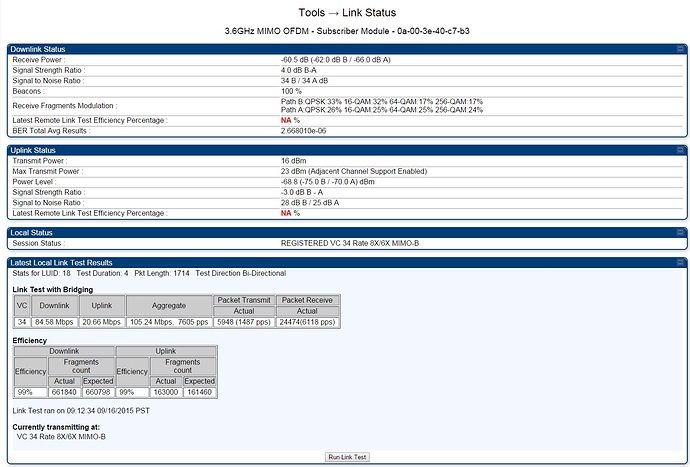 I see what you mean on the uplink side however, I can't find any clients, no matter how good their signal is where there's any % of 256QAM on the uplink... that being said, none of the clients have a higher SnR then 27dB, which I don't believe is good enough to achieve 256QAM. I think you need something like 30+ dB SnR to start getting 256QAM fragments. One of the possible reasons that this is the case is that I have the ATPC on the AP set to -68dBm, and I have adjacent channel support enabled which reduces the SM's power output to a maximum of 23dBm. Between those two things, it's going to be very difficult, if nearly impossible for me to get 256QAM fragments on the uplink. I have the ATPC set to that level, and adjacent channel support enabled in order to reduce LBT events at this site.

What channel widths are you using with that?  We are using 10Mhz and I can only get about 42Mb aggregate out of any of the SM's in 256QAM modulation.  Just wondering what I should expect.  I was thinking that when I ran the link capacity tool it was about right for 10Mhz channels but now I'm wondering  if I'm falling short. 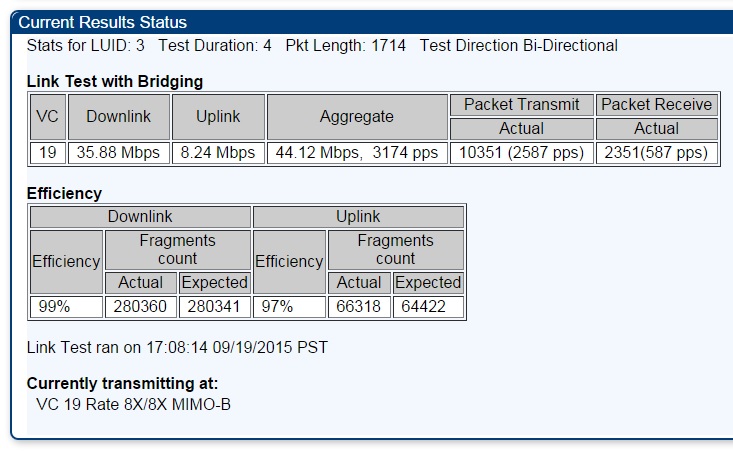 So assuming that you were in a perfect/lab enviro and you could get 100%.. I would imagine you'd see 50mbps aggragate? Which is a bit strange, because one would think it would be exactly half of the 20MHz/125mbps figure... but then again, I've never seen 125mbps in the field or in the lab.

We just have too many long distance shots we are making with our 450 deployment to do 20Mhz channels in our area but I'm hoping to have a little more freedom when 3.5Ghz gets opened up.  Thanks again for your quick communication!