What is the maximum range for connecting e500 points to a wifi bridge?

Hello!
There is no possibility to lay a cable at the enterprise, communication between workshops is carried out via WiFi bridges. The Internet is broadcast from 4 satellite dishes (General speed up to 50 Mbit / s, we are in the forest), commutes and controls this router Microtic. The main load is up to 40 CCTV cameras.
We put point e700 in the center. Four points e500 on the roofs of other buildings, all points in line of sight, inside buildings broadcasting e410.
When connecting a distant point (500m from center), pings increase to thousands of milliseconds, the overall system signal drops to a minimum.
When transferring files between points at a distance of 220 meters, pings also grow, the transfer speed is several megabits.
At a distance of several tens of meters, everything is fine.

We tried old and new firmware, control both using a server (cnMaestro), and control from one of the points (AutoPilot), tried to disable DHCP, changed countries and signal strength, tried to build bridge on 5 and 2.4 Ghz, but nothing helps.

The microtic bridges were returned, Cambium was left exclusively as access points (according to reports on the spot, they freeze and get very hot).

But in my opinion, mesh wifi system does not transmit a signal at 500 meters in the first place!
For this, Cambium ePMP solutions have been made to do what you describe.
I use the mesh in many locations, but it is never more than 150-200 meters.
If you want to have a reliable and fast solution in this area, I suggest implementing MicroPOP 3000 + 4x ePMP 13L connected to PoE e500 ports and you will be very pleased.

We bought the e500 because the sellers recommended it as the best solution cheaper than Cisco.
Mikrotik coped with such tasks without any particular difficulties. I was bribed by the possibility of distributing WiFi by the bridges themselves and the presence of seamless roaming.

If these points are not able to act as bridges, change their characteristics so as not to deceive the client.
Write Real Range Mesh: 2.4 GHz: 30 m and 5 GHz: 15 m and that Cambium can’t doing nothing.
We’ll throw them in the trash as useless I think you are confusing AP and HotSpot functionality. HotSpots are not dedicated to building network bridges, and mesh technology will power the neighboring hotspots. As written, I use it for distances of about 150m with speeds of 300-400Mbps.

Next time I suggest that you describe the seller better what you want to do, because you have a grudge against Cambium and you should have against the seller.

I described everything to the seller in as much detail as possible with the attachment of a diagram of the proposed location of points.
Everything is clear with cambium.

Tell me pleace what does it mean in the official characteristics about MAX RANGE (Mesh)?

I agree with @PFR, something’s wrong here. Maybe I didn’t understand your network architecture.
If I undertood right and you have a central AP and four stellite AP connected ONLY to the central AP, then there are better solutions: put a ePMP AP and 4 ePMP Subscriber Modules.

What Mikrotiks bridges were you using ? From the distance I take SXT’s ?
From the sounds of your design I don’t think Point to center mesh is the right design.I think your original design was sound, I would have just added Horizontal breakouts via the Ap’s as you are currently using (cabled or meshed) that feed from your bridges.

I’ve built thousands of workshops like that using Mikrotik or Ubnt backauls that either hub and spoke or daisy chain to each other (not recommended due to power issues in workshops) with either Cambium/Ubnt/Aerohive/Ruckus outdoor directional and omni antennas covering the inside and outside of the workshops.If you get your cells and do planning right you can get mostly seamless roaming client permitting.

We have no way to lay the cable.
We used Mikrotik before, we bought cambium advertising. As announced, these points can simultaneously be bridges at a distance of up to 1.5 (3) km. Planned distance betwen our points is about 250 m. It was planned that we will completely replace the microtic broadcasting Internet from the center with two transfers to the edges. In this case, from any point it will be possible to connect to cameras on the site.

I have one question left. What does the maximum distance MESH mean in the official specifications.
Is there an official representative of Cambium here and can he answer this question?

WHAT DOES IT MEAN???

WHAT DOES IT MEAN???

In any case, your layout is wrong. 250m with omni(?) antenna and regulated powers are going to cause problems. That’s not how wifi is suppose to work.

If you have someone make you bought those devices don’t blame cambium, ask him why you got those poor performance.

We don’t know how you deployed your device, or what are radio conditions in your place, but… if you want to have a reliable network, use different transport and distribution radios.

If I understood what you want. 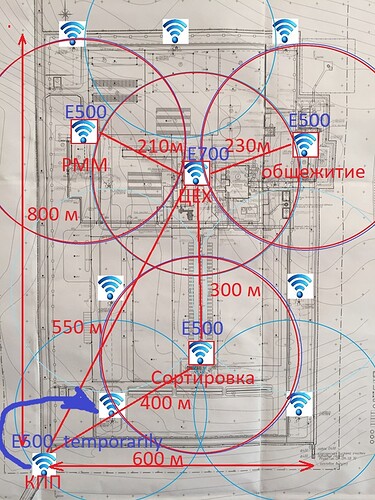 According to the original plan, 11 points should be installed, but after the fiasco we did not buy others.
Antennas can be rotated as desired, the essence does not change

Your post about Distance Range looks like fortune telling on coffee grounds.
In my Country house, such wi-fi is distributed by keenetic home routers. I need to tell them an idea that they also have 3 kilometers of Mesh (or better 10

I’ll talk to suppliers separately.They said that everything should work, they need to connect to set everything up. Then that I need to replace the dots with e700.

I need to figure out what cambium means by maximum mesh distance.
How long is the fiber optic cable?

You use the word MESH all the time, you probably have no idea what it means

Mesh is not a 3 km power technology, because it was not designed for that.
From the very beginning, you should consider a separate transport and wifi layers.

Further discussion about fairy tales, myths and explaining what mesh is for you, maybe you can read (Wireless mesh network - Wikipedia)

I understand what Mesh is.
My English is really bad. I used this word to separate the distance to the client and the distance from the bridge. By Mesh, I mean the ability of points to control the signal from a single center, manage points and divide clients by points with which it has the maximum signal.

Please tell me the email of a Cambium specialist.
I just have one question for him, what did they mean in the characteristics of the E500 (E700) under the maximum distance MESH.

When I receive an answer to this question, I will be able to discuss further prospects for our relationship with the supplier who recommended me the E500.

did you consider any e501S or e502S devices for any of these locations? If you do not need omnidirectional coverage for some of the points you may want to consider the e501s or e502S which are more directional type devices. If you need Omni coverage for all points then the use of e500 and e700 are your best choices for long range capability.

We were overwhelmed by the idea of full wifi coverage with seamless roaming. This way we can be in touch anywhere in the enterprise and refuse (partially) from archaic radio stations.
The E500 seemed like a good and reliable solution.

What is the real distance when building a WiFi bridge between them?
Who can say exactly what the distance means in the official specifications?

We write a lot here, but I only need a reliable answer to the last question.

What is the real distance when building a WiFi bridge between them?
Who can say exactly what the distance means in the official specifications?

I will write it third time:
cnPilot devices ARE NOT DEDICATED to build birdges.
Use epmp and cnpilot as hotspot.
Roaming between hotspots is not the same as mesh!
It will always work even when devices are in a different subnet, but managed by one controller in the cloud.