We have a few epmp 2000's with smart antenna running on 3.0.1 and this is the only AP where I notice the RSSI is wrong in the AP wireless page.  It's mainly the downlink RSSI.  Notice that they are all aroudn -39 to -45.  Most of these SM's are not that hot.   I would also think this AP would have more SM's using the smart antenna. 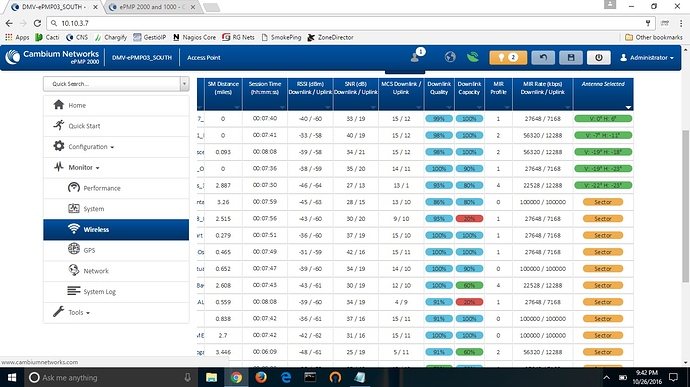 Why do you think DL RSSI reported by ePMP2000 are wrong?

Regarding your wish to have more SM using Smart Antenna, I would like to propose you to try 3.1-RC24 Beta Release or next 3.1 Beta Release which will be published soon. It has several improvements related to Antenna Selection algorithm.

Thanks Fedor.  I will wait until the official release.

When I log into the remote side the DL RSSI is no where near what it shows on the AP screenshot.   In the screenshot, all of the downlinks are around -38 and all of the uplinks  are around -60.  That's not how they actually are when you log into the SM's, nor what they were when these were all connected to a 1000.  Although It would be great if it was that much of an improvement!

First of all I would like to mention that RSSIs in UL and DL are not symmetric because of ATPC.
I can assume you have Subscriber Module Target Receive Level configured to -60 dBm.

Then DL RSSI displayed on AP indicates the estimated RSSI that this SM measures for the AP.

Yes I understand that.

For example,
rssi on the sm is -70, rssi on the ap shows -38. It does not match, not even close. It’s not a big deal I just want to make your team aware of it. Like I said, we have a few other 2000s but this is the only one that has the miss match.

And what is expected DL RSSI calculated by Link Planer or some other tool?