Yesterday I had an SM running 2.5.2 that had to be replaced because of failed ethernet. So I exported the config to load it onto a new radio also running 2.5.2. I first tried the binary option and kept getting a JSON error on import. Then I tried the text export and import to the new radio. I believe it was the same error in both cases, country code should not exist, IIRC. So I edited the text version and took out the country code and then it finally imported.

I took out these two lines:

Now after loading into the new radio and doing a text export from it, the country codes are now:

Not sure what that means.

WirelessDeviceCountryCode = FA means "Follow AP" which means the SM will use/follow the country code of the AP.

WirelessDefaultCountryCode = EI will only be used if you put the SM in Standard WiFi mode. Its a default country code that it will use when it doesn't receive CC information from its AP which is obviously in WiFi mode as well. The AP could be a non-Cambium AP and there's no telling if it will send the CC to the SM. Hence the Default country code.

But I know you are in the US and hence your radio should be an FCC radio . The CC should be US. When you login to the GUI, what do see for "Country" on the radio? It should be US. If not, this could be a bug.

The GUI does say that the current country = United States.

I need to configure some new radios for tomorrow. So I'll play around here in a bit and see if I can reproduce it.

I took a new connectorized radio out of the box and ugraded it from 2.3.4 to 2.5.2. Then I attempted to import the text config I just pulled off of that replacement radio that went up yesterday.

I get the error again. And once again, if I remove the two country code lines from the config file, it imports just fine. But obviously binary is broken the same way. Seems that the export just shouldn't include the country parameters and we wouldn't have this problem. 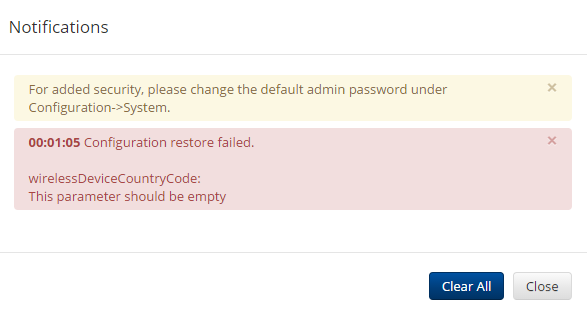 ok thanks George. The CC field is not that important for the SM as it always uses the APs CC except for the Standard WiFi case I talked about above. But the issue still stands. Importing of bin file fails and json works only after removing the CC fields for the SM.

We'll take a look and see if we can roll a fix in soon. Just curious, did this work well on prior releases for you?

Nope, I lied. I exported the text config from an SM running 2.4.1 and it imported without issue on a 2.5.1 radio. That config file shows both country settings as US. So it seems something is different only in 2.5.2 regarding the import and CC being present. Maybe the next release could just ignore the country codes in either type of export file. I think that would be best.

We had this exact error recently (both the bin and txt error).  Turned out Streakwave had sent us a batch of ROW radios instead of FCC.

George, can you double check to make sure the model you have is an FCC model? Its on the label and you can match up the model number to the list in the ePMP Release Notes (Any version).

For what it's worth, I ran into the same problem on 2.5.1 - but it turns out the last batch of radios I got are apparently the ROW model. They do have the right part number on them for the FCC model, but the country code isn't locked in the GUI.

I took out another new connectorized radio and now see that there are two labels on both the box and the radio itself.

If it was relabelled, then it was reprogrammed for regions. You should be good to go as long as the CC says US on the GUI. Thanks for checking George. We're looking into the config import problem. I'll keep you posted.

The ones I got are the same way, I didn't peel the top label off to see what they started out as, but if it was properly re-regioned, should the country be locked in the GUI?


The ones I got are the same way, I didn't peel the top label off to see what they started out as, but if it was properly re-regioned, should the country be locked in the GUI?

The only units that have country locked are the FCC radios. If you were sold FCC radios (re-regioned or not), then the GUI should display only US and you cannot change it. Else, you either got an EU or RoW radio which you cannot legally use in the US and your distributor should swap it out for you.

These radios I have that were apparently re-labeled and re-regioned are indeed locked to US on the radio config page. If that helps.

I'll check them again next week, but I'm pretty certain they did have the right label for FCC radios.

Sorry to ressurect, but I think I got these EU radios to work by backing up a good config from a working radio in the editable version then editing the  country codes to US

The JSON file had this:

I uploaded the JSON to a blank radio with 2.6, then backed up to a .bin and everything appears to be working normal. Hope any of that helps

Same here. The first time this happened we just thought Streakwave had sent us a batch of EU radios but the last two batches we got for sure had FCC stickers on them apparently just stuck over EU stickers. The configs for the FCC radios will not work on the re-stickered EU radios because the FCC config has :

This is really annoying because now I have to maintain 2 separate sets of configs for each POP. We make a change or update firmware now I have remake/update 30 configs instead of 15.

Can't wait to start receiving radios from some other countries that have been relabeled so I can start maintaining 3 or more sets of configs for each POP...