Another approach to band-steering: Steer the user, not the client radio

Administrators taking this approach would create 2 SSIDs, one for 5GHz-only clients, and enable it only on the 5GHz radio; and a second SSID for the 2.4GHz radio. Clients that are single-band (2.4GHz-only) will see just the 2.4GHz SSID and connect to it. Clients that are dual band, will see both SSIDs, and instead of trying to nudge the client driver or radio, the user can be steered towards the 5GHz radio. This is done by naming the 5GHz-only SSID to something clients would want to connect to.

The example screenshot below is from San Francisco airport, where per-radio-band SSIDs are being advertised: 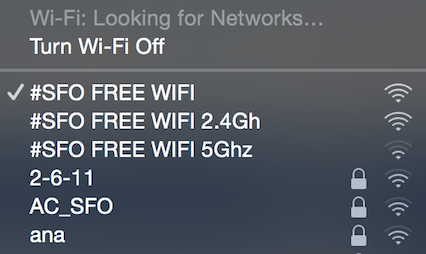 While this is good, the 5Ghz there may not be enough (not every user understands these nuances of WiFi) so a better option might be to call the two SSIDs:

And map the second one (with the enticing 'FAST' suffix) to just the 5GHz radio. Now when a user sees both of these he or she would (hopefully) click the 'FAST' SSID and add that to their client profile.