Dual band radio Access Points such as the cnPilot E400 support simultaneous service on both 2.4GHz as well as 5GHz.

All else being the same (range, signal strength) we prefer that the wireless clients connect to 5GHz instead of 2.4GHz whenever possible, because:

While many clients will connect automatically to 5GHz when they see both bands available, sometimes clients will connect to the first radio they detect on a scan of an SSID, and that radio might be a 2.4GHz radio. So even if the client was capable of 5GHz it ends up setting up and keeping a sub-optimal connection.

The solution to this problem is band-steering. Essentially the Access Point 'steers' the wireless client towards the 5GHz radio. When band-steering is enabled, the AP will ignore initial connection attempts from the wireless client on a 2.4GHz radio of the AP. This usually causes the client to scan its environment again and this time it will detect the 5GHz radio and connect to it.

If the client is very persistent in its association attempts to 2.4GHz (makes repeated back to back attempts) the access point will allow the connection to go through as this might be a client that is either capable of just 2.4GHz (single-band only), or for some reason may not be detecting the 5GHz radio.

When a wireless client is learnt to be 2.4GHz-only, this informaiton is also synchronized among the other access points at the site, so that if the client moves, and now roams to a neighboring AP, its connection will not be delayed (the AP would already know this is a 2.4GHz-only client).

Goto “Configure >> WLAN>>Bans Steering” and select “Normal” mode, by default it will be Disabled.

Goto “Configure >> WLAN>>Bans Steering” and select “Aggressive” mode, by default it will be Disabled.

If cnPilot AP receives a probe request from the same wireless client on both 2.4GHz and 5GHz within a short period, the AP will only send a probe response advertising the wireless network in response to the 5GHz probe. This steers the client to the 5GHz band(see diagram below). If the AP hears probes from a wireless client on 2.4GHz only, it will respond with a probe request advertising the network. 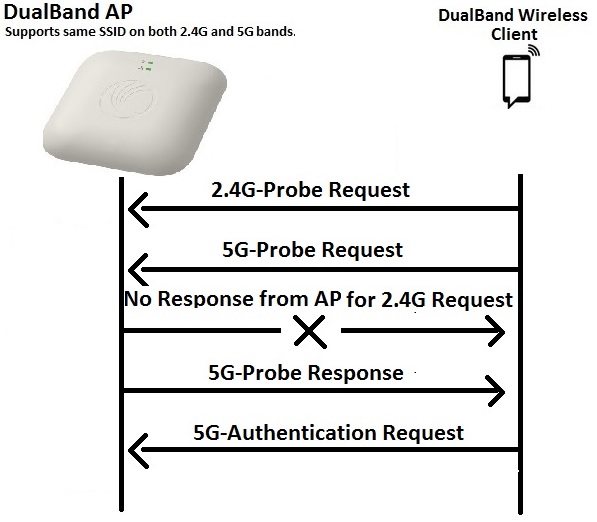