Continuing the conversation from ePMP 4500 Wi-Fi Mode? - #6 by Eric_Ozrelic

and the possibility of development of a 2.4GHz AX radio.

SAY WHAT NOW??? This is an exciting possibility! I had stopped hoping or asking for such… but that is exciting!

I know everyone says “2.4 is dead” and before we tried Cambium 2.4, I would have said the same. We had some non-Cambium 2.4 still out in the field and clients could get an ‘email only’ connection… maybe 1 or 2 mbit through it. I thought “2.4 is dead”! But, some of these folks were just ‘aint going to work in 5Ghz’ so we got some Cambium 2.4, connected it to the same sector antenna, and with the 2.4Ghz ePMP1000 connectorized SM, connected to the same existing client antenna… and boom… often get 30-40 mbit to the same client who could get 1-2 on a good day the day before. So very functional in a ‘better than nothing’ sense.

A few things have changed that making a new generation of 2.4GHz radios based on AX more appealing:

I’m putting a lot of pressure on the powers that be at Cambium for a 2.4GHz AX-line and trying to show that there’s a business case for it. I’m pushing for a simple AX product line consisting of a 4x4 MU-MIMO capable 2.4GHz AP, possibly a 2x2 ‘lite’ AP, and a F200-16-like AX sm/PtP radio.

Here’s a pole I recently ran in the Wisp talk forum on FaceBook which, IMHO, shows that there’s at least 100+ vocal operators that are interested in this platform 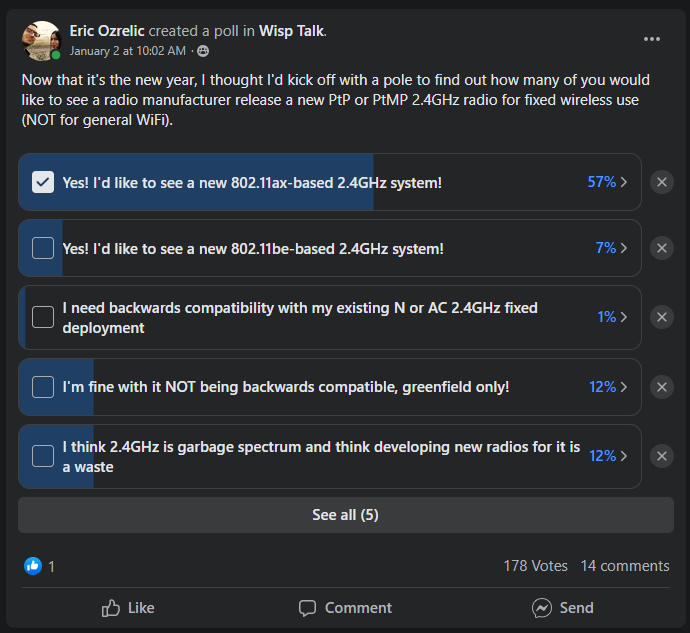 By the way. About 2,4 GHz and the rest of stuff. The only question is expenses/profit ratio. If there is a market for some solution or the only one customer who will buy all units we can do whatever you want. Even paint it pink with glitches.

I’m sure there is a demand for 2,4 GHz for NLOS installations. But it is very tough to estimate quantity of this demand. So it can be too expensive for WISPs to use it.

Thanks for working on them – keep up the convincing. I hope they are listening.

I know it’s a scary thing for them – develop a product line without knowing how well it will sell. Hopefully they’ll use the same SM dish antenna – maybe even let us buy just new feedhorns, so that we can upgrade them in the existing dishes/mounts we already have in the field?

But yes – 2.4 AX and 2.4 BE will be so much more capable, and will allow us to reach the otherwise unreachable.

The reason Cambium said there was never a 2.4Ghz in the 3000 was that there was no commodity AC chipset in 2.4 (which makes sense) so hopefully the availability of the AX 2.4 chipset will reverse that fact. We aren’t a very big WISP, but we would need 300-500 SM’s if 2.4Ghz was available at a SM price point similar to what we’re used to spending on Force 300’s now.

We’ve had excellent luck using e1k 2.4GHz GPS AP’s, and will typically use 20MHz channel widths and back to back frequency reuse in a ABAB 360deg config. This allows us to only have to use 2x 20MHz channels, leaving a spare 20MHz channel just in case there’s noise on one of the others… so we have some wiggle room. We’ll typically use 2.4GHz at major sites where there’s no 5GHz available. After beta testing the ePMP 4500 gear at 5GHz and seeing how well it’s doing with nNLOS and noise, along with the ease it seems to reach 1024QAM along with how low an SnR it needs to achieve a stable working connection, I think AX could be a total game changer for the 2.4GHz band.

Is there enough 2.4Ghz spectrum available for it to still be relevant

For us, the answer is absolutely yes it’s relavant. To be fair, we had the same question with our older non-Cambium 2.4Ghz gear. We just thought it was dead dead… clients could only get 1-2 mbit, and we figured that the band was just dead.

Then we got Cambium ePMP 1000 2.4Ghz gear - connected the same clients, to the same antennas, and they get 20-30-40 Mbit where the other brand gear got 1-2-3 Mbit. So, yes, it wasn’t necessarily a speed demon, but in areas where 5Ghz isn’t feasible due to the bush, 20-30-40 Mbit is certainly “better than nothing” and certainly better than sending the clients to StarLink.

And AX should be a game changer too. Better nLOS performance, better modulations, and better with lower SnR’s… it absolutely could still be relevant, and let us reach the otherwise-unreachable with an even better ‘better-than-nothing’ service.

We stopped allowing new connections/service on our old 900Mhz Canopy 10 years ago (no new customers and if a customer’s service is turned off for any reason there is no coming back) I still have 12 900Mhz Canopy AP’s and 120+ customers. We stopped offering new 2.4Ghz 6 years ago and still have 7 ePMP 2.4Ghz AP’s and 160+ customers. We just stopped offering new 900Mhz 450i connections this year and we really don’t have anything to offer in its place.

I mean/guess, as far as having no spectrum to work with and lots of interference 2.4Ghz doesn’t have anything on 900Mhz. I would be interested in just how much of the old/new 900Mhz customers 2.4Ghz AX could reach so I would absolutely buy 2.4Ghz AX the day it became available… but if ePMP 3000 has taught me anything it’s that having a options of 4x4 antennas is just as important as having the 4x4 radios. The only real problem we have had with 3000 is very few options when it comes to 4x4 MU sectors.

Just wanted to chime in because I’ve been doing some 2.4Ghz 'ax ‘testing’ using Unifi U6-Enterprise radios (that have 2.4Ghz AX in them) and have some astonishing results.

This is LIVE, ie U6-Enterprise in a hotel full of guests.

These are only 2x2 in 2.4Ghz so lacking most of the MIMO and MUMIMO benefits 'ax can do.

This is a reasonably noisy environment. Other devices, next door businesses have 2.4Ghz Wifi, it’s in a downtown area. ie, not lab-like conditions.

Take my money as well! My only hope was that Ubiquiti would do something that wasn’t total garbage as I had written off Cambium moving forward with any 2.4 solutions.

Greenfield would be fine as well as some additonal cost . Just need something that can get through the foliage we have to deal with. We;ve been forced to use the old ePMP, PMP450 2.4 and PMP450i 900 but they just can’t move enough for modern needs. Our newest tower in very rural area is almost all trees. We didn’t deply any 3 or 5 Ghz at all on the tower as it was worthless.

P.S. a F200 type radio would be great but would also very much like a connectorized radio for our own antennas.

P.S. a F200 type radio would be great but would also very much like a connectorized radio for our own antennas.

Well, while we are sharing ideas with Cambium’s design department…

I second what you say Riverrat – or even a larger/higher-gain antenna. I see no reason to have a low gain @ 2.4Ghz (like the original ‘integrated’ was) because any place we can use an 9dBi or 11dBi @ 2.4 we can also probably shoot through that same amount of trees with 5Ghz @ 25dBi or 32dBi antenna. So with UBNT they had their super big LongRange or XR or whatever models, and for us, that’s probably all we would have purchased. We want everyone to be as good a signal as we can, and if we’re using 2.4 in challenging and obstructed situations, then higher gain is what we’d usually err on the side of anyway.

And not the clip on extenders like the F425… really expensive, expensive to ship separately, and looks kinda janky. I frankly love the concept of the Mimosa idea… one radio, and multiple dish antenna sizes. Their implementation might be poor, but I like the concept of one radio to stock, and 3 different antenna sizes. We’d probably always get the 27dB or whatever the largest is, we’re always dealigng with a lot of range and some obstructions.

Another thing that some other companies do OK is release new version of feedhorns that fit the existing dish/mount. That might not be practical, but if it is… that’d be great for simplicity and shipping. If we could buy 20 feedhorns and put them into existing F200’s. Maybe not… maybe its simpler to just replace the whole thing, but shipping new dishes is expensive.

AND, a note on shipping… we’re always trying to only buy the 4Pack of 300-25’s and there are so many sellers that only have the singles, which are nearly 4x as expensive to ship to us. If there is a way to have mostly 4pk or 6 pk (or a 10pk in two boxes? one box of feedhorns and one box of dish/mount? maybe that’s a bad idea)

I mean if you still produce 900mhz radios which work great for us people in the bush, I think people would pay the price to have a reliable 2.4GHZ AX option. No offense but you at Cambium are the only ones who support the lower bands. I don’t think its about cost anymore to stay alive fighting against Elon Musk’s tincans of cheaply built hardware hes selling to the masses and oversubscribing. Give us WISP Operators another bone to fight with for the last mile! If people are willing to dish out 700-900 CAN for Elon’s Internet I’m sure they would dish out for more towards a 500-600 CAN 2.4GHZAX Radio at home. Still better than Xplornet.

if you still produce 900mhz radios… …I think people would pay the price to have a reliable 2.4GHZ AX option.

I agree. I think people would pay a similar price to what we’re paying for F300-25 or whatever the F4500 series SM’s will be - in order to have 2.4Ghz AX performance which works in 450i type conditions.

I think it would be a mistake to throw up barriers like last time, and to charge dramatically more for 2.4ghz than for 5/6 Ghz… but if we can buy a 4200L and 4225 SM’s at the same price of 4500L and 4525 SMs… then I think this is a obvious winner for WISPs in conditions like ours.

In the past, ePMP was significantly less expensive, which was a large driver for me. Now, though, the ePMP and PMP450 price gap is closing, and it is unclear to me whether the updated PMP450 is going to outperform ePMP AX… with further information I could see advocating for updated PMP450 instead of AX in 2.4 GHz.

I would gladly pay for better 2.4ghz. I had the same experience as Ninedd. I thought 2.4 was dead. But when we did elevate, we started getting 20mb in 10mhz channel widths. I would pay to simply double that. We are in a tropical environment so NLOS is just a fact of life. We have used all the available 900 also.

The whole reason 2.4ghz was as popular is because there was no sync (gps or over power) on the connectorized version. This simple oversight made it less appealing and realy only for simple non sync’d setups. The performance was there, enough so that I have a couple of 2.4gh dishes in ptp mode doing wonderfully where a 5ghz would not work properly.

I would be thrilled to have a 2.4ghz option that was AX and sync’d with over power sync being wanted over onboard gps.