cnMaestro On-Premises 1.4.0 has been posted to the Cambium Support Center website. You can access the software here. This is an OVA update, which means existing cnMaestro On-Premises installations should export their data and import into cnMaestro 1.4.0. The basic steps are defined in the User Guide. The new features available in this release include the following:

A simplified WiFi UI for users managing cnPilot Enterprise devices (including the cnPilot E-Series and ePMP Hotspot) has been added. The Wireless LAN View hides all traces of Fixed Wireless and focuses exclusively on Enterprise Wireless LAN. Customers creating new Company Accounts can select the Wireless LAN Account Type in the account creation page. Current customers can choose the view at Manage > Settings > Account Type (see graphic below; note only Enterprise WLAN devices should be in the account prior to the change).

The updates to the WiFi Only View include:

An example of the Device Data Report configuration for ePMP is presented below. The administrator can choose the fields to be included. Device and subtree selection is done using the navigation tree. For example, one can select a Network node to generate a report for all devices in that network. 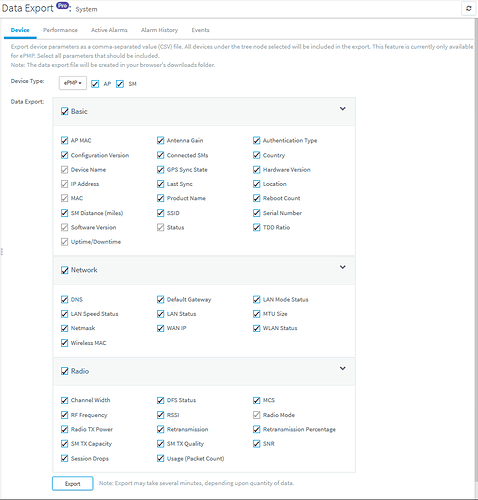 Automatically configure and approve WiFi devices connecting to an on-premises installation. Rules are created based upon the CIDR subnet of the device.

The Data Reports and Auto-Provisioning features have been labelled “Pro”, which means theywill be included in the future as part of a paid version of the product. Features not marked “Pro” will part of cnMaestro Basic, which is free of charge.

A Data Quota Limit is supported for both Controller- and RADIUS-based Guest portals. For Controller-based, the limit is either directional or based on total data. When the limit is reached, the client is disconnected. Similar behavior is supported through the following RADIUS attributes (the “gigwords” are used for data quota limits above 4 GB):

SMS OTP supports Twilio, SMS Country, and Gupshup gateway providers. It enables SMS OTP to be delivered to an end user cell phone. Once OTP is received, the client can enter the one-time-password to get Internet access.

Ability to tunnel wireless traffic from the APs to cnMaestro On-Premises, which acts as a tunnel concentrator. This is useful when the client’s IP range is not routable. Note the AP must have a software version of 3.1.1-r16 or later in order to use this feature. More information is available  here.

WiFi devices configured with AP Groups can be automatically synchronized whenever the configuration changes. This feature is set in the AP Group. By default all new cnPilot Enterprise AP Groups will have the feature enabled, and cnPilot Home AP Groups will have it disabled. Existing AP Groups (Profiles) will also have this feature disabled after the update, and it will need to be explicitly turned on by the administrator.

A number of updates have been added to the WiFi configuration and management screens.

So is this mainly just an export update, and wifi centered, no feature improvements for pmp yet?

As a note, a nice way to expand this "export feature" even if you had to restrict it to pro, would be the ability to export the data for SM's including locations etc to Link Planner, that way we can diagnose issues, i mean in reality i'd love to see link planners features moved into cnmaestro but i imagine thats a bigger project than just a way to export a Link Planner project from cnmaestro including AP/SMs

I really hope a new update comes out for cnMaestro that will make updating ePMP devices easy prior to any new ePMP firmware updates been released.

Has the issue of cnMaestro rebooting busy 3.6 GHz PMP450 AP been addressed?  I don't see any mention of it in release notes either as a known issue or a resolved one.

Can you please provide more details which reboot are you talking about for PMP 3.6 GHz device. Also please confirm whether the issue is seen under normal traffic load or under heavy load.

In our testing environment we have not seen any reboots of the device so far in cnMaestro 1.4.0 release with the device build 15.1 Beta 5 .

Regarding the traffic issue , the device  is not rebooted but it loses ocnnectivity with cnMaestro temporarily when the traffic is too high.

Please let me know which device build you are using and in any specific scenario you are seeing this reboot.

We need to stop with the rip and replace of cnMaestro. Export, replace VM, import is getting awfully old each time I upgrade. Yes, I know there were a few versions that could just use an upgrade package, but I was still running a version old enough at the time to not be able to use update packages. I finally do that and now the next version is rip-and-replace.

Also, this paid version is for the birds. I absolutely will NOT pay for cnMaestro. It is currently so very cumbersome to use I cannot even fathom the amount of work it takes for the guy that proposed this to put his pants on in the morning. He's gotta have a HUGE set down there, which has to make putting pants on difficult.

But the way they do upgrades needs to change

Also considering we pay well for the radios already as a customer providing this server free of charge was a good thing.  For there to be a pro version there better be some extremely nice updates and features added to make it worth any form of payment.  Plus the option to add an API so that those of us who don't use it as heavily can write our own mechanisms if we can't justify the expenditure.  For example we already have out own snmp utility that will push settings to radios globally however CNM is a little more user friendly for our installers/techs.

Also when will scheduling be a thing?

Subi and I emailed back and forth about it back in late January.  Our four heaviest traffic 36 450 AP were rebooting with crash dumps which had something to do with cnMaestro.  We turned of cnMaestro management of just those APs, and the problem stopped.

I can turn it back on again and see if the issue starts happening again.

We understand your concerns. The product team is notified of your questions and comments.

exporting and importing data is still not working for me.

It didn't work on the last release and now its not working on this release.

Thanks for the note. We will get you a response on this.

tech support did a remote sesssion but could not figure it out either.

Hi CSSup -- the 1.4.0 release is largely focused on  Wireless LAN features, though we do have plans to start rolling out a sector view with radio configuration in the next couple months. This is the first part of a more comprehensive LINKPlanner integration beginning later in the year. We will explore  whether we can leverage the export feature as an interim solution. Some additional features on-track for Q2, which will benefit all product lines, include administration roles, graphical reports, on-premises API, and on-premises high availability. With the latter feature we are looking to replace the export/import OVA updates with a more elegant (and automatic) process.

Hi Chris-T -- is the issue with the ePMP upgrades the embedded tree display in the upgrade page?  We are looking to replace that with a more basic tabular view (filtering either through the table or the tree), but it may not be until the end-of-April. We will have an interim release before it, but it will mostly consist of navigation improvements to support revamped Fixed Wireless and Wireless LAN views. The upgrade page enhancements are close on the priority list.

Hi Mike and Chris -- improving the full image upgrade, and removing the export/import requirement, is in plan for Q2. We expect to make the changes in tandem with on-premises HA support, and they will of course also work in a standalone environment. So the expectation is not much longer for relief, but perhaps still too long, because we will most likely have another OVA prior to its rollout.

Are you still planning on restricting us to 2000 devices if we refuse to pay for pro?

At least you went the simple route for VMs by providing an OVA.

The cnMaestro Basic cloud version doesn't have a limitation on number of device.

For cnMaestro Basic On Premises version, yes, the basic is limited to 2,000 device. To unlock this thresold, it will be paid feature, $2500 on time charge.

Allenyu you guys realize how backwards that is…
cloud we use your servers and hardware at cambium expenses frond free unlimited
But we have to pay to use our own hardware and reduce cambium hosting expense?