Some cnMedusa deployments are instrumented to collect debug information. Part of the collected metrics describe the slot utilisation on a TDD by TDD basis. This data can be post-processed to illustrate MU-MIMO operation.

In the diagrams below, each rectangular cell represents a single downlink TDD. These read in time order from left to right, and top to bottom.

Links between an Access point and Subscriber module are referred to as virtual circuits and every virtual circuit (VC) is assigned a byte identifier. These are typically expressed in hexadecimal format.

Each cell in the diagram contains coloured areas which denote slot utilisation. Red areas are associated with MU-MIMO data and blue with non-MU-MIMO data. In some cases, a particular VC of interest is highlighted in yellow. The length of the colored bars in these diagrams is proportional to the number of slots in the downlink for a specified VC.

MU-MIMO VCs appearing in the same cell are said to be grouped. These VCs are able to transmit data simultaneously. In some cases, the slot utilisation varies across the group. This simply means that some of the VCs had less data to transmit than others. For ideal operation the group is balanced with every VC occupying the same number of data slots.

MU-MIMO VCs appearing in the same cell are said to be grouped. The MU-MIMO VCs in each cell start in the top left corner and are stacked vertically. The VC identifier for each overlays the red bar.

The non-MU-MIMO VCs appear to the right of the MU-MIMO VCs, these are arrange in order from left to right and their VCs are recorded in the lower right hand portion of the cell.

An illustration of a downlink TDD containing both MU-MIMO and non-MU-MIMO data is shown below. 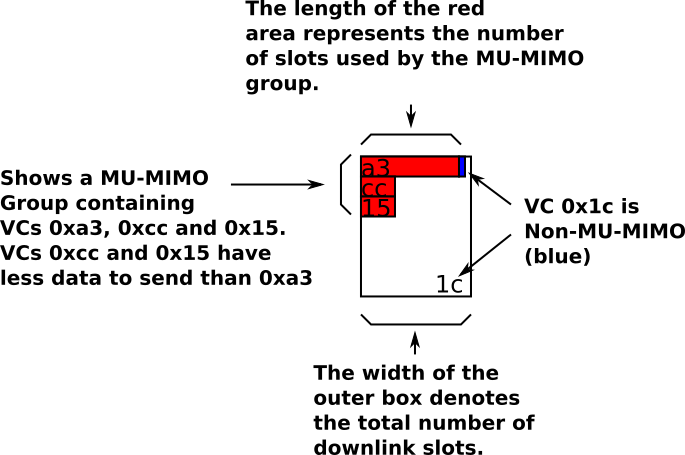 The remaining diagrams show sequences of one hundred downlink TDDs. The debug information was collected from a cnMedusa configured for data collection on a customer network.

The first of these shows operation during a moderately busy time. The red bars indicate that MU-MIMO operation dominates. A VC of interest (0xcf) is highlighted in yellow. There are some TDDs containing non-MU-MIMO data. This may be because there are no suitable VCs which are able to form groups at a particular instant.

The second diagram shows the same network operating during a Multi-VC link test. Large groups are present in all downlinks. The small amount of non-MU-MIMO data is associated with VC 0x0c, the broadcast VC, which cannot be sent in MU-MIMO mode as brodcast data must reach all SMs - rather than a MU-MIMO grouped subset of SMs.