Uplink MU-MIMO has been discussed in this thread:

It's still under development but I thought I'd use a test build to cheat in Andrew's "Anybody managed to max out a 450m ? What's your max throughput ?" thread, here:

Anybody managed to max out a 450m

The test conditions are close to ideal. The link is operating in an anechoic chamber with 21 SMs in a single horizontal line spaced so that the SMs can form three separate MU-MIMO groups. I'm using a flood test to maximise the wireless throughput - the flood is operating on both the downlink and uplink. I've set the bandwidth to 20 MHz, and the downlink is set to 85% with 2 contention slots. This translates to 70 downlink and 13 uplink slots.

Measured at the wireless, I'm transferring 684 Mbps down and 110 Mbps up - 794 Mbps aggregate (I think that has maxed it out for the moment, Andy). The modulation mode in the downlink is typically 256QAM_DUAL (x8) and in the uplink is most often 64QAM_DUAL (x6).

On closer inspection, both uplink and downlink are forming data groups of seven VCs almost all of the time, which is optimal. In addition, the ACKs sent in the uplink (which acknowledge downlink data) are sent in MU-MIMO mode so they consume only a single uplink slot.

When analysing sector performance we often use a diagramatic representation of the slot utilisation for each TDD. This is discussed here:

These diagrams have been extended now to show uplink as well as downlink, here is an annotated diagram of a single TDD captured in the previous test: 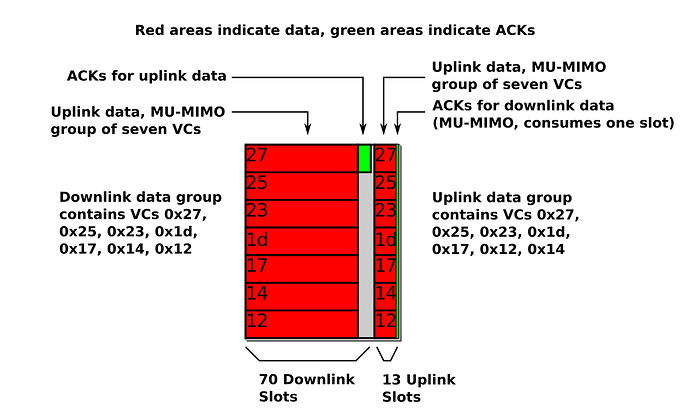 As before, data slots are in red. The data acknowledments (ACKs) are shown in green. As you can see, most of the TDD is either red or green, indicating high utilisation in both directions.

Here's a series of ten TDDs in the same format, it shows the data VCs changing from one TDD to the next:

Clearly this is a contrived test and the rates are measured at the wireless interface. The purpose of these tests is to ensure that high sustained data rates are handled correctly.

In practice, uplink MU-MIMO has a number of practical applications, for example CCTV backhaul. In addition, it reduces uplink congestion without any need to alter the downlink ratio settings. We've found that in practical applications where users are streaming downlink video the TCP ACK traffic in the uplink can be significant.

So cool!  Can't wait to get this released to everyone... we are targeting late Q3 for this release, but expect an Open Beta to try it earlier than that.