I would like to understand why I  have certain clients that keep dropping off the beaming antenna and keep going back to the sector :

What are the causes of this ?

What does it mean/how does it affect performance. I cant find much information ?

ePMP2000 compare what Throughput can be obtained using Sector Antenna and using Smart Antenna in Uplink for each SM and select the best one.

So it seems you may have issue with Smart Antenna deployment.

I would be grateful if you could attach networks topology on map from cnMaestro for example to realize location of devices.

What is the width of the beam forming antenna is is possible these clients are outside of this angle ?

What is max vertical  angle ? 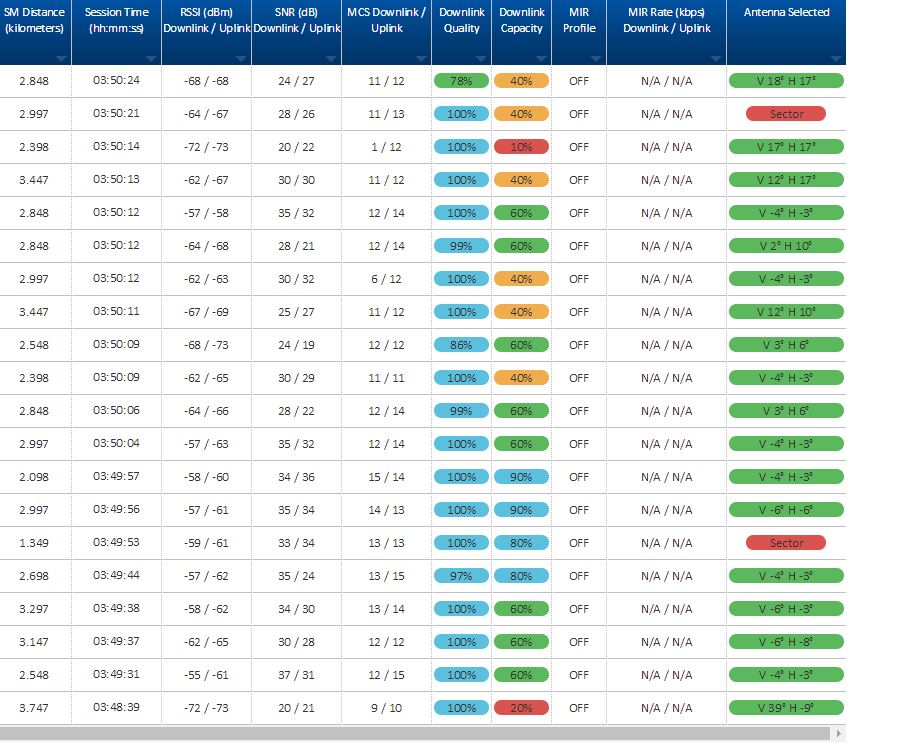 Smart Antenna has effective coverage in 90 degree on vertical and it has almost uniform gain on horizontal.

AP calculated that it can provide better throughput in UL using Sector Antenna for these two SMs.

It is not an issue by default. Where are located these two SMs? What are the angles?

Earlier you said "So it seems you may have issue with Smart Antenna deployment." so which is it? Is this a problem or not?

It looks like possible issue when you have 2 of 4 SMs connected to Sector and you know they are located in the front of the Smart Antenna.
But it is expected behavior when 2 of 20 SMs are using Sector and are located on the sector’s borders.

I have a similar issue. I have set up the 2000 AP so the 90 degree beam forming antenna is easily covering all the SMs attached to it. However, only two SMs are using the beam forming:

I think some of those SMs could benefit from the beam forming antenna to help uplink.

Looks like SMs can reach higher Throughput in UL via Sector Antenna in your case.

It can be caused by Deployment Issue.

Let me know if you would like to debug that issue on your setup.

I'd love some specifcs on "deployment issue."  I have changed my downtilt and azimuth but it has had no effect on the use of the beam forming antenna.  I have also tied different channels.

I did a pretty thourough calculation on our downtilt and have the radio set now with 15 subs on it and very few seem to be on the beam antenna though they are right in the 90 degree pattern for it. 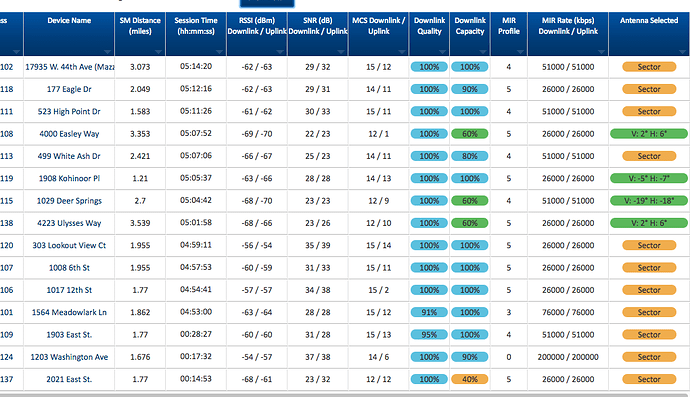 I will contact you offline to arrange remote session for debugging.

I have run another full suite of tests with a side by side of a 1000 GPS AP and a 2000 AP with 13 different clients.  We used two different 5 GHz channels for the test (each AP was tested on both channels).  All data was recorded in a spreadsheet.

The results surprised me, to be honest. On one channel, the 2000 AP was clearly superior. On the other channel, the 1000 AP had by and large better results. Both channels had similar noise floors and both channels reported green lights for all SMs in eDetect.

Full report and results is attached.  I'm still trying to wrap my head around the different results.

Did you make any headway with this and figure out why your results varied?

Looking at your test resutls it looks like you got better overall and consistent results from the 1000 series.  The 2000 results almost seemed like they were too hot, is it made for further distances?

I am looking to outfit another tower with AP's and am thinking if I should hold off on the 2000's and just stick with the 1000's for now.  Has anyone else had any luck with the beam forming?

I'm not even sure if I need that now, I'm not even really using sync either, I'm just using connecterized radios.
I'm running into memory issues, so will probably upgrade those with GPS, but other then that my results have been pretty good.

I am getting much better results with the 2000 AP as the 3.x firmware matures.  It honestly is doing a pretty good job with upload speeds in congestion.

However, if you are not in a noisy environment, it may not benefit you. We have a few 1000 connectorized APs out there as well (non GPS) but we are also running into memory issues and starting to upgrade those to the 1000 GPS version. That is a super solid AP and I love using it.  After about 10 clients, the non-GPS AP runs out of memory. And it's not really designed to be an AP. It just happens to work as one and is much cheaper - but the GPS version is a better option.

Is the first time we post here hoping someone will help us understand where the problem is in our case.

Hardly we brought in europe four full kits of epmp 2000  / antenna / beamfoming considering that almost no distributor ( EU ) has on stock this model. We was pretty excited to get our hands on something like this in the moment. Until 3 months ago our entire network PTMP was with UBNT  products  ( M,AC ) and on one of the busiest point ( tower ) we started to change from UBNT products  to Cambium ( epmp ). We use AP model with GPS and all set to 2.5 ms frame with very good results and latency. Any of the new AP ( 4 at the moment ) have ~ 30 SM each already and we do not see significant differences in stability and modulation...OK. Now we testing the new epmp 2000 AP on UBNT 45 degrees ( same tipe on epmp1000 GPS  with no problem ) with smart antena connected. During our tests we found problem with stability ( modulation ) and we are a bit worry to connect customers. SM connects to AP with very good Downlink RSSI / SNR / Uplink MCS / Downlink MCS but after short time Uplink MCS drops considerably. After few test we saw that if SM stay on ( Idile or sleep mode ) Uplink MCS modulation drops Considerably from 15 to ~ 5 and if use to a maximum SM ( speed test 80 - 140 Mbps ) modulation returns to maximum. Not to mention that smart antenna do not come into work for this SM ...??.. Test was made with fw 3.0.1 and 3.0.1-RC14 with the same results. We change also RSSI limit from -60 to -58 to -55 to -50 ...limit was reached by SM but continue  the same issue. Was use Spectrum Analyzer and indeed the frequency is not " completely clean " knowing that it is in middle of the city. If this is the reason that will be told why during tests modulation get back to ~ 15 / 15 ? ( on test time interference disappear ? ). We attach photos if possible to be able to see what we are talking. I hope I made myself understandable because English is not my language.

Any suggestion is appreciated.

Issue you've described above is specific of ePMP software.

It cannot affect performance of your link.

However when your SMs are in idle without traffic system does not have enough statistics for data packets to make correct decision what MCS should be used.

Once traffic appears again on channel the highest possible MCS will be used.

Thank you for your feedback.

I've been trying to wrap my brain around the angles reported.

I'd expect that kind of variation across Horizontal, but not Vertical - for vert I'd expect that the closer the client is to the tower, generally the lower their vertical angle would be.

Antenna Selected field indicates the antenna for which uplink communication is conducted, Sector or Smart Antenna. When Smart Antenna is displayed, an indicator of the azimuth angle (in degrees) of the antenna pattern is displayed. The V value represents vertical polarity and the H value represents horizontal polarity, both relative to boresight.
H and V can have different values.