Will it be able to talk to two 200 clients at the same time?

Will it only talk in 4x4 when its has only force 300 customers on it?

I know cambium tries to manage expectations before this stuff is actually released, but it would be great to have some more inforation about how this transition is going to work so we can plan how to integrate this into our network.

I have a number of areas where it's at or nearing capacity, and I would rather wait and sink more money into 3000  than put up more 2000Ap's now

A 3000 AP that has a mixture of AC clients and legacy N clients (F200, etc) will speak MU-MIMO to AC clients, and normally to legacy clients. There's an estimated 10% overall performance reduction while running in this mixed mode. Legacy clients will possibly see some signal improvements due to diversity gains from the 4x4 antenna.

Highest performance, will be a 3000 AP with only AC clients, no mixed mode. (MU-MIMO, AC up to 256QAM). In tests we've seen 200+mbps using a 20MHz channel with a decent mix of AC clients spread out in such a way they can trigger MU-MIMO.

I'd imagine that a 80mhz channel would not be possible in Legacy mode. That is worth noting.

N series hardware does not support 80Mhz wide channels from what I can tell.

N series hardware does not support 80Mhz wide channels from what I can tell.

While the legacy ePMP 5GHz radios don't currently support 80MHz, it would be interesting if Cambium came out with a build supporting this channel width. My guess is it would require some FCC re-certification for legacy radios however... so this is very unlikely that they'll go through the expense to do this.

On the other side... I'd really like to see the AC gear support 5 and 10MHz channel widths. This would really help with legacy transitions.

On the other side... I'd really like to see the AC gear support 5 and 10MHz channel widths. This would really help with legacy transitions.

I know the ePMP 3000 AP is going to be 4x4 - so it can talk to 2 clients simultaneously, how will this apply when its in a mixed mode with both 300/200 clients? Will it be able to talk to two 200 clients at the same time? Will it only talk in 4x4 when its has only force 300 customers on it? I know cambium tries to manage expectations before this stuff is actually released...

These are some of the early results we are getting with an ePMP3000...  This is an ePMP3000 AP in 40Mhz mode, in 75%/25% ratio, talking to Force300 SM's which are benefiting from some MU-MIMO.  Basically, I look at MU-MIMO as "free throughput", because these results show 100-140 mbit or so more throughput downloading than a single client would be capable of without MU-MIMO.  So, this is about 413 Mbit Aggregate Thoughput in 40 Mhz channel - which is pretty nice to see.  I actually expect in an optimized situation (with future release software and with SM's in better physical situations) that these numbers will get even better. There is a MU-MIMO "Percentage Gain" indicator on the ePMP3000 AP, and this indicator was no where near 100% with these two clients in this particular setup - so I expect this will get even better going forward. :)  However, even under less-than-optimal sitaution today, the download capacty jumped from 200-240Mbit in a non-MIMO setup, up to 344Mbit download capacity with MU-MIMO, which is essentially 100+ Mbit of free (spectrum wise) throughput.

Also, I did some quick 80 Mhz wide tests. This again is very peliminary. I switched over to 80 Mhz, I did a quick test, and then I switched back to 40Mhz. The Beta firmware says "BETA QUALITY" on the 80Mhz button... so I read that to mean that Cambium expect this to do better going forward.  However, it gives a glimps of what it would be capable of.  I don't expect that we'll run 80Mhz outdoors... we havent' given it much thought, but we probably won't use 80Mhz partly because this would be more throughput than our backhauls are capable of in most sitautions. Besides, if 20Mhz is capable of over 200 Mbit aggregate, and if 40Mhz is capable of over 400 Mbit aggregate - I think that'll be all we need for now. :)

However, we did want to test it and this is the first/quick 80 Mhz throughput test I did to a Force300 client - about 633Mbit throuhput in 75%/25% ratio. Pretty cool to see a number this big, expecially with only 'beta quality' software. :) 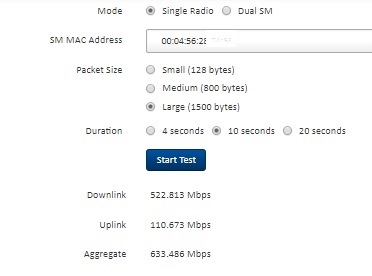 What MCS values did you have when doing these tests? Also, do you have any results for 20Mhz? We have some coming in this week we plan to run in 20Mhz and was curious.

We've got a few deployed in 20mhz wide. With low noise (-80 or better noise floor) and -50 signal you should get DS9 downlink MCS and we 95+95 on mu-mimo spread so the downlink alone is almost 200mbps which is more than double the epmp1000 was able to do on the same spectrum. I'm finding the force300-25 dishes have much better gain and sensitivity than the force200 dishes did for some reason as well, signals gain a few db at least with a direct swap.

One thing we noticed is when there is noise the CPE's tend to disconnect quite easily so be careful of noisy areas.

Thanks, good info. That is interesting about the noise but not suprising. The 3000's receives with 4 chains, so it will receive noise 3db more (double) than a 2000. I am sure Cambium will fine tune this with time.

I'm hoping that when the smart antenna uplink becomes availble that will deal with some of the high noise on the AP we are seeing and help with the disconnection issues at times. It was mostly the new beta firmware, when we downgraded to the latest stable firmware a lot of the disconnections went away so it most likely is something that is being worked on to be as aggressive as possible with speed while maintaining the connection from my feeling with the beta firmware.

at what distance you have your SM?