4.5.6 is the recommended version to run on all AC platforms.

OK, I was asking because cnMaestro says that 4.5.5 is the recommended version.

There were major stability improvements introduced for ePMP3000 and ePMP3000L.

Hi Fedor, for when an upgrade to F300-13L? we are having a lot of SM needed to rebooted any time…

The latest FW released for F300-13L is 4.6-RC29 Beta.
https://community.cambiumnetworks.com/t/epmp-beta-release-4-6-rc29-is-now-available/73233
If you experiencing any issues with F300-13L please reach me at fedor.trutsko(at)cambiumnetworks(dot)com.

Thank you Fedor, we are testing and send a feedback later.
Regards

A post was split to a new topic: Elevate frequency range

This won’t be a particularly useful reports, but here goes.

Anyway - NO - I don’t have support files to send in anywhere, we of course had to focus on getting the client reconnected. I downgraded the AP back to 4.5.5 and we called her and got her to power cycle, and that worked.

I’ll try to upgrade this again after the long weekend, and I’ll post back here. This may have simply been “one of those things”, and nothing to worry about…

It has now stopped passing data again tree times over the ethernet of the AP side as before, so we are rolling back to 4.5.4-RC16 until we can replace this link.

Does this update benefit ptp 550 in any way?

No it doesn’t.
4.6 Beta includes some PTP550 improvements.

Couldnt find any docs on what those improvements are in the 4.6 Beta.

Dont see any notes for 4.6 beta but thank you!

There right there, in the link I sent you. 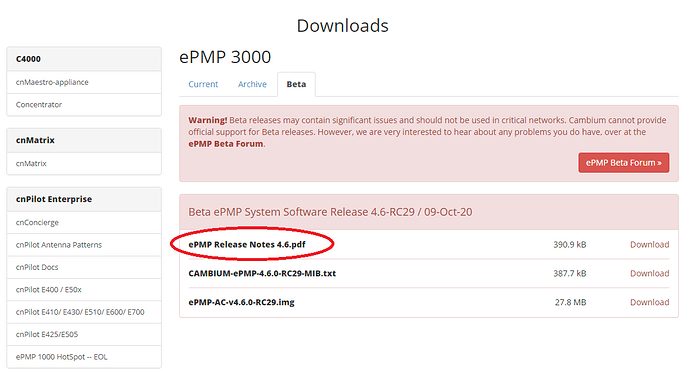 when I get to that page , it only has join beta forum… which I have in the past so not sure why its doing this… 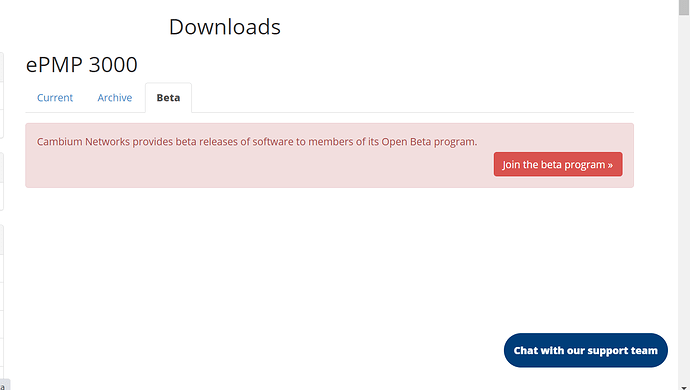 You’ve joined the cnPilot Beta, but I don’t think you’ve joined the ePMP Beta (at least, not with the account that you’re currently using). There are separate programs for each product line.

From time to time, Cambium Networks provides access to beta releases of its software to customers who join the Open Beta program. You can find the list of currently active Beta programs at https://support.cambiumnetworks.com/beta. Discussion of Beta releases happens on this community site, in categories that are restricted to people who have accepted the Terms and Conditions of the Open Beta program. The following links will take you to the appropriate Beta discussion board, prompting you to ac…

…and then see this link for ePMP Beta release announcements (you won’t be able to access it until you’ve joined the ePMP Beta program):

This post lists most of the 4.6 improvements (note that the rc28 release was withdrawn but rc29 includes the same changes):

Has anyone had EPMP2000 APs hard lock on 4.5.6 firmware? Ethernet port is still up, but completely hard locked? Something that may happen before this is constant reboots prior to just locking up. Really hard to say… but dropping back down to 4.4.3 stabilizes it.