Clients in that sector see the one on 5770 anywhere between 10 and 20 dB stronger.  No matter their location within the sector, it's far weaker on 5180.

I tried swapping the two frequencies, and the same situation held - the one on 5180 was seen at 10-20dB weaker than the one on 5770.  Which basically rules out any problems/differences in radios, antennas or alignment.

Are the chains within 1 or 2 dB of each other on the AP with the lower signal?

We had an issue recently where the signal levels were as you described and long story short, turns out one of the chains was 15 dB off. Found the bad lead and everything went back to normal. 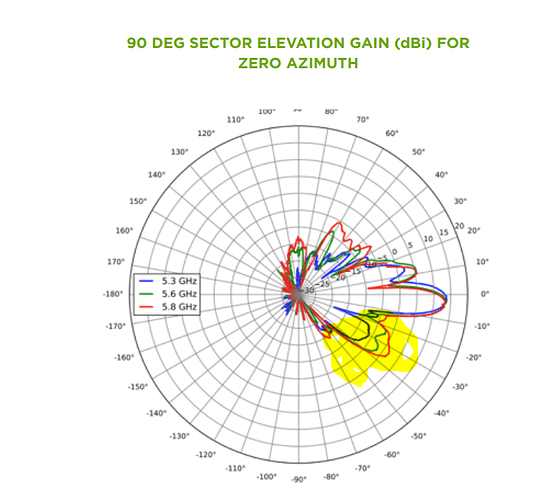 Your aren't aimed into the bottom lobe are you? Will give a 10db or so difference in RSSI from 5.8 to 5.3 if you are. I doubt with your experience this is the case, but figured it would not hurt to ask.

Clients range from 1/2 mile to 9.25 miles out from those two APs, so I suspect the only way we'd be on the bottom lobe for most of them would be with significant UPtilt on the tower...  I'm not the guy who climbs towers and installs/maintains the physical gear so I can't swear to what downtilt actually is, but supposedly it's between 5 and 10 degrees downtilt on all APs on the network.  Also, AFAIK those are both the older ePMP5 120 degree sector antennas, though one could be the new model that accomodates both ePMP2000 and ePMP1000.

Are the chains within 1 or 2 dB of each other on the AP with the lower signal?

We had an issue recently where the signal levels were as you described and long story short, turns out one of the chains was 15 dB off. Found the bad lead and everything went back to normal.

The problem followed the 5180 channel when I swapped frequencies between the two overlaid APs, if it was a bad antenna lead the problem would have stayed with one AP regardless of channel.

Are you using the original ePMP1000 Cambium antenna or the newer Cambium 90/120 sector (C050900D021A) antenna with these APs? The ePMP1000 platform has a lower tx power capability in the lower band (http://community.cambiumnetworks.com/t5/ePMP-Configuration-Management/Tx-Power-Configuration/m-p/53650#M24), but it does not explain the difference you see. Could be a function of the antenna for the frequency and angle to the SMs.

Have you tried the same experiment with an ePMP2000 and newer Cambium 90/120 sector antenna?

Luis - I'm pretty sure both APs are on the original 120 degree antennas, though it's possible one of them is on the newer antenna.  however, as noted, the differential follows the channel swap such that whichever one is on 5180 is seen as 10-20dB weaker, which suggests that the radios and antennas are effectively the same.  We're talking about a base of about 50 customers between the two APs, ranging across about 90 degrees left to right and from 1/2 mile to 5 miles from the tower.  We don't have an ePMP2000 that we can perform any experiments with, and I'd prefer not to have to go through the trouble and expense of getting one installed 300 feet up an FM transmission tower just as an experiment.

In the meantime, we're working to eliminate a 5GHz backhaul at that tower which would free up a channel at 5835 we could then use for APs.  (unfortunately that effort, in full including related changes, entails 8 separate tower climbs on 6 towers to complete, but it's in progress right at this moment and will hopefully be completed before the weekend)

Not trying to pick, Just some friendly advice. I would reccomend that you thouroughly document your AP's downtilt at installation. We started doing that about 3-4 years ago, and havent looked back. Makes a hige difference in future site planning and testing. When we plan out a new site, we generally set the sector at 0 or -1 tilt as a starting point. And this is documented in the site notes, if we alter the tilt, the notes are updated to reflect this.