While this forum is a great place to hear from our customers and we really appreciate that, it is also becoming a board to highlight issues and problems you see. I want to take an opportunity here and there also to showcase how the product is also working well. This is not meant to take away from some of the open issues but showcasing some of the impressive results we are also seeing.

If possible, I would like to have a map of customers, to understand their azimuth distribution.
This is a very good grouping, and maybe see users' positioning can help for a better planning.

Those results would be impressive if it was running on a 20mhz channel.  On a 40 mhz channel with that many clients and packages that large it's not that impressive actually.  150mbps max throughput would mean only three 50x10 clients could be downloading at full speed or four 35x10 clients.  I would guess most customers on that sector are feeling pinched.  40mhz is supposed to be capable of 400mbps and with that many customers on plans of that size I would assume if the epmp 3000 was capable of delivering what it was supposed to we would see 300mbps plus max throughput on those charts but seeing a max of around 150mbps is disappointing.  Another thing that makes me think it's maxing out is the high mu-mimo throughput, correct me if I'm wrong but mu-mimo doesn't kick in until su-mimo is at it's limits.

This is not the limit, frame usage is 49% as stated in the first part of the video, so I think that AP could easily reach >300Mbps in 40MHz channel, correct me if I'm wrong on that.

From this video, I understand 150Mbps is the current throughput with current users, and not what the AP is capable to reach as max speed.

I saw that as well.  But from what cambium said mu-mimo doesn't activate until su-mimo hits it limits.  The other thing that makes me think it's at is limits is the client count and the packages.  That would take some abnormally low usage customers for 150mbps to be peak usage.  My customers would blow past that in a heartbeat :).   I guess what's feeding the sector could be the culprit, if their backhaul is bottlenecked then throughput would be limited.  Still doesn't explain the high mu-mimo usage though.  It would be nice to see the performance with the same sector in a 20mhz channel.   It's just lacking so much information.

I think someone from Cambium could tell us more, but in my 3k APs I'm not seeing 100% SU-MIMO usage before MU-MIMO kicks in... sure it's not used as its best but it's constantly working.

Do you offer 50mbps plans?

Do you run similar client counts?

My busiest e3k AP has 50 F300 customers in a 20MHz channels, I'm continuing to add new customers, but their experience is still great and everyone can reach its profile even during busy hours, about 90Mbps peak traffic. When I'll get more users I'll post some data here.

I have many e3k APs and I'm still loading them, I don't have a "full" AP, so I can't say which is the real limit considering both 256QAM and MUMIMO.

MUMIMO and SU-MIMO are not relevant at all. What we called SU-MIMO is essentially DL beamdforming where one SM is not groupable or does not have traffic as part of MUMIMO it gets the 3dB additional beamforming gain. When you see tput charts like this, it represents max data the users are pulling not necessarily what the AP can push. If the demand peaks up so will the tput.

Someone here stated that mu-mimo doesn't kick in until the AP is busy enough to justify it.  Which makes sense.  Mu-mimo isn't going to affect performance much on an AP that isn't nearing it's su-mimo limit.   This follows what I see on my AP's.

This is a screenshot I've just taken from one of my 3k APs.

There's a mix of distances, about 50% of traffic is 256QAM, the remaining part is 64QAM due to interferences.

Performances are good and everyone has its profile even during peak hours.

I'm continuing to add users, and I'm expecting to reach about 170 peak traffic with 90% frame usage.

So, from my point of view and my experience, the 40MHz AP we've seen in this video, will easily reach about double the numbers we're seeing now.

@Chris_2:
About MU-MIMO not kicking in, I can say that if traffic is low, chances that traffic is groupable are lower, so you'll see less MU-MIMO traffic.

I'm continuing to add users, and I'm expecting to reach about 170 peak traffic with 90% frame usage.

@Chris_2:
About MU-MIMO not kicking in, I can say that if traffic is low, chances that traffic is groupable are lower, so you'll see less MU-MIMO traffic.

As far as the mu-mimo, we have ap's with a nice spread of clients that are groupable but rarely do we ever see mu-mimo kick in even as throughput climbs into the 80-90 mbps range.

It depends on your customers and their traffic, do you have a good grouping?

Grouping is great, still not much mu-mimo action.

That's strange, could you post a screenshot from Monitor -> Wireless? 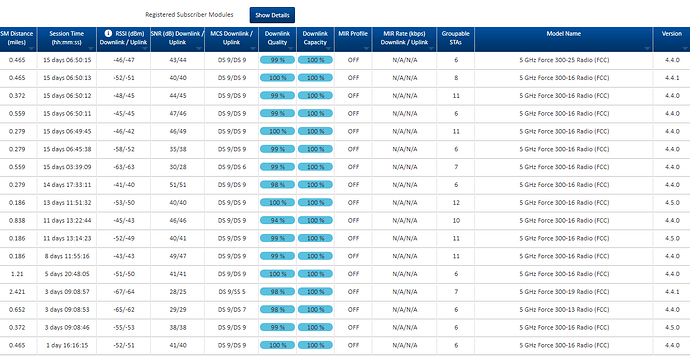 MU-MIMO kicks in when you have two groupable users making traffic at the same time, so you need to understand why you don't have groupable traffic.

You should analyze it manually in real time.

Increasing your users you'll have more chance to group traffic and get more traffic on your AP, even if now it seems to be almost full.

Obiovusly, this is true if users are groupable.

On my APs with good MU-MIMO traffic, I see each user with an avg (total users)/2 groupable SM or more.

This is from my experience, hope that makes sense.

what is the latency between the SM and AP testing directly on the command line inside the SM?