How to Achieve over 1 Gbps with PTP820 product?

This is an interesting question and needs a lot of deep discussion.

People will consider optimizing performance settings using PTP 820C with dual core, both cores enabled, using the widest channel (80MHz), with highest modulation level available (on 80MHz - 1024 QAM), and with physical link aggregation (MC-ABC). Given these settings, if each core will give over 600Mbps, then the radio will provide 1.2Gbps, is that right?

Unfortunately, it will be a wrong answer. I will share more details tomorrow on how to do it right to get over 1Gpbs with the PTP 820 product.

Multi-Carrier Adaptive Bandwidth Control (MC-ABC) is an technology that creates logical bundles of multiple radio links and optimizes them for wireless backhaul applications. Multi-Carrier ABC enables separate radio carriers to be shared by a single Ethernet port. This provides an Ethernet link over the radio with double capacity, while still behaving as a single Ethernet interface.

For the configuration with 2 x 80 MHz channel configruation, each channel will provide 600Mbps throughput. But when have MC-ABC feature enabled, since it is mapped to a single Ethernet port, the throughput will be limited to 1 Gpbs.

In short, if you want over 1 Gpbs throughput, you shall not use MC-ABC, as it will cap the throughput to 1Gbps.

In order to exceed 1 Gbps, we need to separate the Radios. we need to create 2 x P2P Services. 1st Service from 1st GBE port toward Radio 1, and the 2nd service from another GBE port to the 2nd radio. in such setup, you will get  2 x 600Mbps, which is 1.2 Gpbs.

Follow previous discussion, if customer want achieve over 1 Gpbs throughput, it is recommended not use MC-ABC, as it will cap the throughput to 1Gpbs. 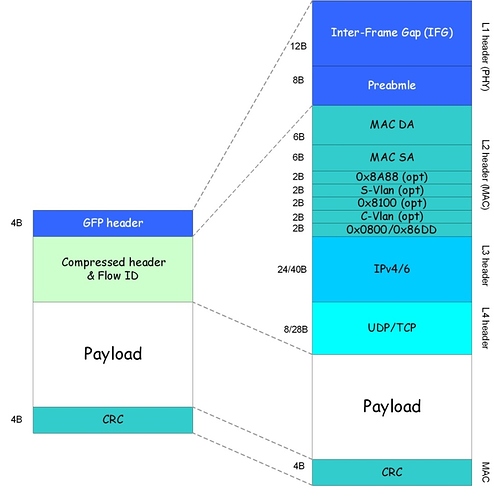 as the diagram shows, the De-duplicadtion is a technology by replace the packet header during the transmission and make it more effective for wireless data transfer. General speaking, the smaller the packet size, the more improvement you will be able to see. in our lab test, we can show 70% growth on 64 bytes frame.

Wihch means if customer has De-duplication features enabled, the radio throughput could easily pass over 1 Gpbs throughput though the uncompressed layer2 throughput may below 1 Gpbs.

Here is a table shows radio throughput on a 40Mbps channel,

I think it is good enough for today.  I will continue our discussion tomorrow on what configuration is recommended if we have the air throughput over 1 Gpbs.

A summary of using PTP820C for 2+0 link configuration for over 1 Gpbs configuration, you will need two cables per radio in order to achieve over 1 Gpbs, as per port is limited to 1 Gbps.

During the configuration, you can go with either a multiple P2P service or a single PMP services, either way works.

With header-deduplication features enabled, the Ethernet throughput over the air can further boosted. Depends on packet size, the radio may deliver over 1Gbps even customer use 28/30 MHz or wider channels.

Here,  i will use PTP820C 2+0 configurations as examples show what is needed and how to setup a radio for such configuration.

Keep in mind, in order to full use over 1 Gbps throughput over the air, customer will need two Ethernet cables per PTP820 radio. Also no MC-ABC features shall be enabled, as MC-ABC (multi-carrier adaptive bandwidth control) will map the radio throughput to a single Ethernet port, which will cap the throughput to 1 Gbps even the air throughput could be much higher. 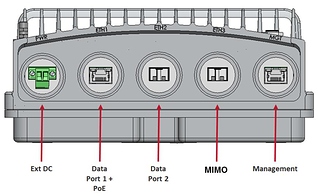 Following is the typical BOM for this setup

Following is the typical BOM for this setup

Tried this setup on 8.2 with an 820c, but does seem to have a limitation/bug on VLANs that traverse the link.  I have a trunk between two Cisco 3560G switches and it would pass traffic on a couple VLANsm but not all of them.  It would pass traffic on VLAN 10, 20, 30, but not 70, 100, 700, 2010.  I would remove the VLAN 10, then 70 would work.  Seems to be a bug in the software.  I spoke with Cambium support regarding this issue and they said they don't configure 820c radios in the same manner as posted in this thread.  Any suggestions?

Can you tell a little bit more about your setup, such as channel size, modulation, etc?

Also what is the throughput you get with your setup?

Can you use  the second SFP port to achieve this as well?

The second SFP on the PTP820C is used for MIMO data-sharing. So, in normal PTP820C, you cannot use it unless you make a special order from Cambium.

Also, as long as I know, there is no bug like what you described in the previous note. If you can tell me what you want to achieve (maybe even draw a picture) I can help you.

I have a question, I have a PTP 820C with OMT, at the moment I'm using the DEMO license.
Configure the link with MC ABC, created a group with both radio and created a LAG with both interfaces, also I created the P2P service with MC ABC and  LAG to pass 1.3Gbps full duplex.
My question is, LACP protocol that uses the 820C and that I can not make it work with my switch

which switch you are using? can you share more detials on switch setting?

also if you have MC-ABC group, the capacity is lmited to 1 Gbps, you will not get 1.3 Gpbs.

We are setting up a 1.2 Gbps link for the first time and are curious about the management IP address (Platform/Management/Networking/Local) configuration

I see under Ethernet/Services the MNG service ID 257 is Operational. If I check the Service Points for this ID 257, I see that it is tied to Ethernet: Slot 1 port 1 and Radio: Slot 2 port 1.

Does this mean we lose management if this ethernet interface is lost, but the radio still passes traffic on interface two?

What's the best course of action? If we add the other interfaces to the service point, might that cause IP conflicts? Should we set up a second management interface with a different IP address?

Check out this discussion here: http://community.cambiumnetworks.com/t5/Licensed-Microwave/PTP-820-in-band-management/m-p/64804

Please look at the attachment as well, and pay attention to the very last page.

I hope this helps!