This exciting new feature allows users to quickly see which location will provide the best LOS coverage. We have also added a couple of new backdrop layers in the map view (Dark Gray and Light Gray) to allow the viewsheds to be more visible. 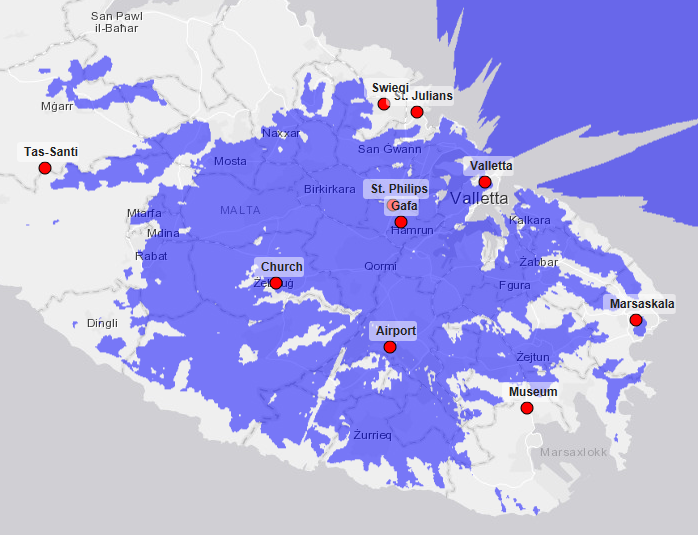 See our Knowledge Base article for more information on how to create and manage viewsheds, https://community.cambiumnetworks.com/t5/LINKPlanner/How-to-Create-a-Viewshed/m-p/116297#M28

The following shortcuts are now available:

Press escape to cancel any of these functions

These are the power cords that have been replaced

PTP 700 now has an additional Link Type option for 2+0 and uses a similar concept to PTP 550 2+0. In this release the equipment configuration is mirrored between the two paths and cannot be set independently, except in the 7 and 8 GHz bands, where one path can be at 7 GHz and the other at 8 GHz.

Note that the 2+0 option is only available when both local and remote product choices are the same in the sub 6 GHz bands, either both PTP 700 C+I or both PTP 700 C-Only and also does not support E1/T1 as it requires a more recent software version.

When 2+0 is selected LINKPlanner adds two child paths for Link A and Link B and automatically enables Sync as both radios must be synchronized when sharing a common antenna. The 2+0 option automatically adds the symmetric coupler. If planning links without the coupler they can be planned as two separate links in LINKPlanner, configure the first path and then use the Duplicate option to create the second path.

When planning CBRS networks the equipment parameters need to be uploaded to cnMaestro for use by the SAS. LINKPlanner has added an export option to simplify the creation of the spreadsheet used to input the parameters into cnMaestro. Please take a look at our Knowledge Base article for more information on this feature, https://community.cambiumnetworks.com/t5/LINKPlanner/Exporting-CBRS-Information-for-cnMaestro/m-p/116302#M29

The 5 and 7 MHz bandwidths have been removed from the CBRS regulation and various power limits updated to comply with the CBRS and 5 GHz FCC grants.

This may result in a warning appearing when opening an old project file, in which case please check the rules in your project file and update as necessary

This is automatically corrected for the V5.2.3 version as well

These products can support a minimum transmit power of +3 dBm combined.