New to E400 and cnMaestro

Hello, I'm very new to Cambium products and cloud management. I just deployed a wireless network consisting of 5 x E400 and have some questions:

2) what is the best way to configure a static IP address for an AP, both in pre-configuration (before onboarding), and after the device has been onboarded? Please provide specific instructions as I've found cnMaestro to be extremely confusing for configuration.

3) why does e400 assign itself an IP address for each VLAN that it's associated with? I've setup several different kinds of AP's and I've never seen this before. Usually (and what I was expecting) is that I would assign VLAN's (1 native untagged, and multiple tagged for SSID's) and then I would configure ONE VLAN for management with IP address. I don't understand why the unit wants an IP address in each VLAN - this seems like it could be a security concern.

-What is the best way to change the wireless channels of the AP's after they've been onboarded?

-how can I force a reboot of all access points at once?

-is the Useage Limit>Rate Limit for WLAN per access point or a total limit for the WLAN across all access points?

-where can I find a good, best practices tutorial that covers the entire setup process (from onboarding to optimizing configuration) for e400?

P.S. as someone brand new to Cambium I must admit that I'm pretty dissapointed in the learning resources available: documentation is lacking and outdated in several cases, very few useful tutorial videos that I've been able to find on YouTube, phone tech support was unable to explain configuration items in cnMaestro - I'm really hoping the community can turn around this experience for me

11r roaming involves an client associated with one AP, carrying out part of its authentication with a second AP before it roams to it (so when it eventually roams there are fewer messages that need to be exchanged and things move along faster). Two ways of exchanging this information are over-the-air to the second AP, or through the wired side, by sending frames to AP1, which bridges them across to AP2. This latter mode is called 'over the DS'  in the specification (DS=Distribution System)

>  2) what is the best way to configure a static IP address for an AP, both in pre-configuration (before onboarding), and after the device has been onboarded? Please provide specific instructions as I've found cnMaestro to be extremely confusing for configuration.

pre-onboarding it would be on the AP itself (log onto the AP GUI and change the IP address under the interfaces vlan). In the GUI this is in Configure->Network->VLAN. Screenshot below:

Once onboarded and configured, cnMaestro has an option under device-overrides to set per-AP parameters. So under the device configuration click on the little icon for overrides and in the pop-up you'll see an option to set the IP address of the device. the IP can also be setup to be learnt automatically when the device connects to cnMaestro. 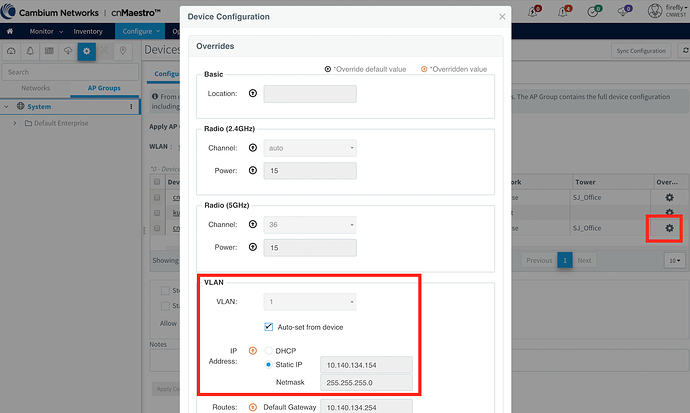 > 3) why does e400 assign itself an IP address for each VLAN that it's associated with?

This would happen if you created an interface-vlan for each of those VLANs. Note that if you are bridging traffic you do not need to create the interface-vlans for all of those vlans. You can just add them to the ethernet port after setting it into trunk mode, just like other typical enterprise APs

we have a Knowledge-Base article that might help clarify the VLAN config:

>  What is the best way to change the wireless channels of the AP's after they've been onboarded?

cnPilot APs support Auto-Channel-Selection and starting from release 3.2 Auto-RF which does channel as well as power management automatically. If you wish to set static channels on some APs after onboarding, you can use the per-device override (the same way the static IP is to be set through cnMaestro in #2 above)

>  how can I force a reboot of all access points at once?

reboot is currently supported only per-device, we'll check into adding it for a site.

> is the Useage Limit>Rate Limit for WLAN per access point or a total limit for the WLAN across all access points?

Other resources include the user-guide and related technology guides on the support site:

the knowledge-base on the community site here:

and this forum itself.

Thank you very much for the quick response and detailed info!

(FYI I'm trying to use cnMaestro for all configuration - if I have to log into the actual device it defeats the whole purpose of me using Cambium...)

1> Where can I find the requirements for 802.11r Over-the-DS? Following the information that you provided further down I intend on removing all but one VLAN interface which will be used for Management and I want to make sure that 802.11r Over-the-DS will still work - AP's will still be able to communicate and exchange roaming information when they'll only have 1 IP address which will be on a seperate network than the VLAN that the wireless client is on.

2> I did notice that on the Claim Devices/Approval page, where one can set which AP Group to configure the units with, there was an option to override IP address there so it appeared that I could use that to set IP address during onboarding/configuration. However this didn't seem to work - it wouldn't save the changes I made, I assume this was because of the multiple VLAN interfaces that I had.

3>I read the article you provided and that was very helpful (wish I had found it sooner). So not knowing any better, I configured all the VLAN's that I wanted to use on the AP in the Network>VLAN section - but from the looks of it this creates a VLAN interface that requires an IP address. So now, all I have to do is remove the non-management VLAN's from the Network>VLAN configuration inside the AP Group and then re-push the AP Group to the access points? After modifying the AP Group, is it possible to configure the static IP addresses that I want configured on the AP's for the one management VLAN prior to pushing the configuration (so that I can reconfigure all the AP's in one step from cnMaestro)?

4>I currently have my AP Group configured for "auto" channel. I see in cnMaestro where I can configure overrides for channel per AP. Where do I set Auto-RF for automatic power management?

5>okay, or the option to force all AP's to re-evaluate wireless and select optimal channels

6>how do I configure rate limit for the WLAN across all access points - needed for business with limited internet bandwidth and very large guest WiFI area.

Thank you for all your help.

Similar to my question about WLAN Rate Limiting; is the "Max Clients" setting in the WLAN config the maximum number of clients who can join the SSID on THIS AP, or the SSID across ALL AP's? (Is this applied to the individual AP or to all AP's?) Thanks.

Max client setting done on SSID is per WLAN basis. By default it is set 127. When we push this configuration from cnMaestro it is applicable per AP basis. Total number of max clients supported per AP is 255. These clients can spread across multiple SSID or single SSID.

Thank you for the response.

Yes you are true!