We have deployed new 4 sectors of a PMP 450 3.65 setup with shielded cat5e cable 240ft up on an FM tower and are experiencing several issues and wanted to know if anyone out here has experienced them or can help please.

Our issues are: 3 out of 4 AP's will drop packets down the tower to CMM4 when it rains. We already cut ends off the bottom and replaced CMM4 and even tried a CMM3 with same results. Ironically, the issues seem to happen after a rainstorm has just passed but seem to survive most of the time during the rain. Sometimes a reboot of the power port in the CMM will bring it right back up, sometimes not.

In a not so unrelated story, we have a backhaul unit that will not negotiate to anything other than 10Mb Full duplex at the top of the tower. The 450 AP's stay at 100Mb Full duplex (as they can only do 100M full in CMM power ports).

Of course this is an Ethernet issue but here is the kicker... We added another half link backhaul unit to the bottom of the tower to test with and it will not negotiate to 1000M Full, only 100M Full when plugged into the CMM4 gigabit uplink ports on managed switch. If we take this link to our office it will get a gigabit link every time, so we know it's not the equipment as well as cable since we tried many types and shielding.

This being an FM tower, we found several people sharing these symptoms with link negotiation and gigabit. We did put ferrite cores at the ends of our half link at the bottom and it will keep a gigabit link until it hiccups after a day or two and then it's back to 100M full again. Rebooting will usually bring back gigabit link.

In addition to all of this, when our AP's are actually fully functional in nice weather they are constantly reporting that they are detecting radar despite the fact that no known radar station exists for 50 or more miles away. We found another fella with a 450 setup who said this was self interference so, sure enough, we started powering down AP's and radar detected message goes away. All the AP's report they are receiving sync from power port so I don't know what the hell to think about all of this.

We are going to climb soon with replacement cable- going to try copper clad cat6 by Superior Essex and see if we get any good results from that. Ironically, there is an older "six pack" of 5700AP's that we set up like 8 years ago that is using unshielded cat5e that literally has zero problems. Can anyone provide any helpful suggestions to try or advice on what to do here? Thanks.
FM / AM transmitters
PMP450i issue or Cable?
ETH LAN side negotiate @10MB/half duplex always
Joel_Newkirk_1 (Joel Newkirk_1) November 17, 2014, 5:34pm #2

The toroids we used are Epcos R102/65.8/15, Series/Type B64290.  Material N30, ordering code B64290A0084X830.  Ive' been told by our RF guy that they were chosen specifically to match 104.3FM.  I do NOT know the calculations involved in that, nor how significant the matching is.  (presumably using the same cores for something in the upper end of FM band would be more effective than the bottom end, though)

I too had been trying to find that thread here, my search this morning turned up this one.

PS - I don't even know if this is the same account I used when I responded to that thread on the old forum - I now seem to have THREE accounts on this forum, hopefully some way to consolidate them exists.

Like others we ran into problems from time to time, but we've been pretty much golden since we deployed 2.5" diameter ferrite toroids at each end of each cable. Wrap a dozen or more turns of cat5e through the ring (12-15 turns usually, make sure there's no overlap and minimize gaps) and terminate cable a foot or less away. Ethernet link remains stable, packet losses over ethernet at or near zero.

Thanks for your reply! We put FERRITE CORE, SPLIT, 12.7MM, 250 OHM/100MHZ on the backhaul wrapped only a single loop about 2 or 3 inches from the ethernet link going into the jack of unit. It worked for the most part but wasn't very consistent. Funny thing happened today, we found out a major part of our problem with the backhaul was the uplink port in the PoE injector to the CMM. We used all kinds of cable on the uplink port but only one of those 5 inch CMM4 uplink cables would allow it to do gigabit. We tried a new PTP 250 tonight and it's negotiating at gigabit with no problems with uplink to CMM or without using ferrites. We tested another 450 at the bottom of the tower with unshielded cable and it never dropped. We think the foil twisted cat5e we bought is literally acting as an antenna and getting some kind of charge from wind/rain combo and causing us grief (that's our hypothesis anyway)

I've heard of people using fiber but didn't know exactly how people did that. Does that seem to work okay with Sync and everything? What kind of equipment is that you use for fiber, if you don't mind me asking?

newkirk (newkirk) November 17, 2014, 9:21pm #5
We're using Aaxeon ethernet-to-fiber converters. With some creative wiring you can run DC with sync up the tower via cat5 alongside fiber for data. Simpler is DC and fiber up the tower and sync injection with GPS at the top with the APs. (for a single AP - like a test - its simpler to just use a timing-port sync injector beside the AP)

But the fiber experiment came first, then we rewired a smaller FM tower (180ft) using the ferrite toroids and were pleased, so we redid the 400' tower with the toroids and will probably not bother switching to fiber. Now that we're successful avoiding induced problems via ethernet from the FM transmitter, the only impetus for switching to fiber is to get CMMs and router and POEs in a shed at the base of the tower instead of 200ft up the tower. (and the primary decider on that is the same guy who climbs that particular tower most of the time - he seems just as happy to climb for infrequent problems rather than the extensive climbing and recabling entailed in switching to fiber all around in order to move control/power to the bottom)

j
Nathan_Dothager (Nathan Dothager) November 17, 2014, 9:22pm #6
Good info. So, have you placed the ferrite's on each AP as well? What was happening on your setup that required ferrites for you?

Today we climbed and had to put ferrites on the backhaul link at top and it did fix our gigabit problem. We didn't put them on every AP but now I'm wondering if that was a mistake. We have a funky temp setup at this very moment -long story, but we still see a packet or two dropped up the tower more frequently than we'd like. I'll know more tomorrow after we finish up moving frequencies around and adding the other new link of the backhaul that was put up today. The climber (who knew about WISP equipment) thought we were insane for having him put ferrite cores on the cable until he saw the results. It's FM!

BTW: do you have a specific model of ferrite that you use that you count on? From your explanation of them, yours sound much larger than the one's we are using. Happen to have a part number? Thanks for taking the time to correspond. Much appreciated!

Sorry about the delay responding. 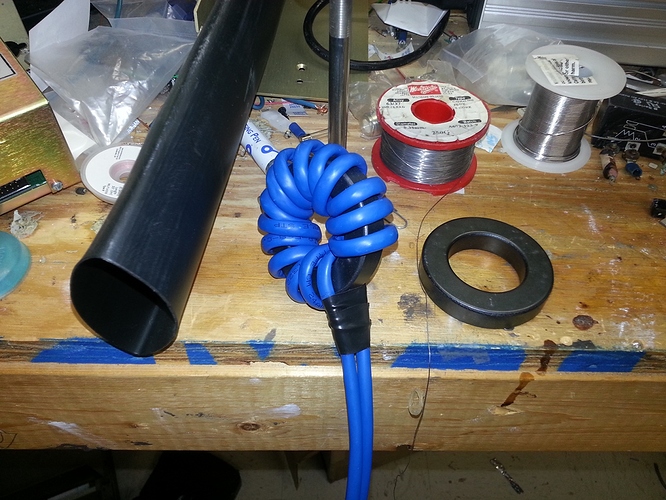 FerriteWrap.jpg1280×960 468 KB
We use these guys. On the right is the ferrite core, in the center is a wrapped example. (this is actually a reject - we won't accept it unless the wrapping is tight and non-overlapping - 12-14 turns usually, depends on cable) On the left is the monster heatshrink we use to wrap it all once it's finished and approved.

We put one at the top and one at the bottom of each ethernet run going up that tower. (basically we use these as premade jumpers between POE and bottom surge suppressor and between radio and top surge suppressor) The symptom we encountered was packet errors/packet loss/link instability over ethernet to the PMP320 APs, as well as a PTP600 backhaul.

We seem to be experiencing identical issues as what you describe and it would make my year if this fixed our problems totally. Let me know what you think. I really do appreciate your response. Thank you very much.

Nathan
newkirk (newkirk) November 17, 2014, 9:25pm #9
I'm not aware of any negatives when done right. Ensure you have tight even wrapping, no overlaps. (My understanding is that this also serves as something of a surge protector, though I don't know to what degree it is effective)

I'm sure there's a point at which it's "Too Much", but we've had good results as I stated with a single 12-turn wrapped core at each end of the run.

What kind of cable are you using for your deployment?

We had really good success after putting up the copper clad cat5e to the backhaul and adding two snapon ferrites up by the PTP 250 backhaul.  It will kinda negotiate at gigabit but ping times are horrible and drops so we are forced to use 100M full connection and is stable there.  Next climb we are going to do more tweaking with ferrites on that copper clad link and see if we can get it gigabit.

We also are getting an electrical engineer out who is also an experienced Ham operator so fingers crossed.  I'd love to pick your RF guy's brain about the specifics on those toroids and that FM frequency.  We are dealing with two FM stations  (97.9 and 102.3).  We've alreay primed him on what we are dealing with and he did want to know FM frequency, how we were grounding, and what type of cable we were using.

I found this thread as i have been having issues myself with interference. Do you happen to know what range of frequencies that toroid covers?

Do you happen to know what range of frequencies that toroid covers?

As mentioned earlier on in the thread, "FERRITE CORE, SPLIT, 12.7MM, 250 OHM/100MHZ"... the goal is to mitigate FM carriers at or around 100MHz which is the same operating frequency as ethernet.