This feature is intended to support zero-touch detection of cnPilot access point on cnMatrix switch and dynamically configure the port on which the LLDP packet is received. The support for PBA Auto-vlan feature starts from cnPilot firmware version 4.1 and cnMatrix firmware release 3.1.1-r3

Functional Details about the PBA Auto-vlan

The PBA TLVs are implemented as an extension to the LLDP standard, using its flexible extension mechanism.

Two new TLVs have been defined:

Upon receipt of this LLDP authentication tlv, cnPilot AP responds by sending Device setting tlv (which basically includes the list of vlan ids allowed on the trunk interface of the AP). The expectation is the native vlan on the AP’s ethernet interface to be untagged. However, when AP Ethernet is in Trunk Mode with Native VLAN Tagged, then Native VLAN ID must be present in Allowed vlans on the interface so that it is allowed by the switch on the port.

On cnPilot AP, PBA device setting TLV is included in LLDP packet if the ethernet port is in trunk mode. It is not generated if it is in Access mode. LLDP is enabled by default globally on the cnPilot AP. The cnMatrix switch authenticates the received LLDP packet from the cnPilot AP. From the device setting tlv, the switch reads the component (VLAN list, state flags) and creates a dynamic policy that is applied to the port on which the tlv was received.

This is Proprietary tlv generated by cnMatrix to convey authentication related data and setting. If this tlv is included in the LLDP packet, then it notifies the cnPilot devices that PBA based data path configuration is supported by the cnMatrix. If the tlv is absent, then this feature is not supported.

The PBA Authentication TLV exports current authentication-related settings and data that is required to support secure communication between the device generating authenticated PBA TLVs and cnMatrix. It sends the following information in the tlv.

This proprietary tlv is generated by the cnPilot Ap’s to update PBA enabled uplink switch about the interface configuration requirement.

It is only generated following the receipt of a PBA Authentication TLV on the interface.

The Digest is computed by passing the below data to the HMAC-SHA256.

This data, along with the message authentication key, is passed through the standard HMAC-SHA256 algorithm to produce the associated message digest. The digest is then placed in the HMAC-SHA256 Digest field in the TLV prior to transmission. Upon receipt, the digest is again computed, and the resulting digest is compared against the received digest. If the received digest is the same as the newly computed digest, the TLV is considered authentic and processing can commence. If the comparison fails, the TLV is discarded and processing is terminated.

The primary use of the PBA Device Settings TLV is to pass desired VLAN settings from the source to the destination device to facilitate automatic configuration of datapath settings. This effectively pushes policy action data from the source downstream device to the destination upstream device. Settings are applied to the port through which the TLV was received (i.e., the ingress port). The following VLAN settings can be specified. 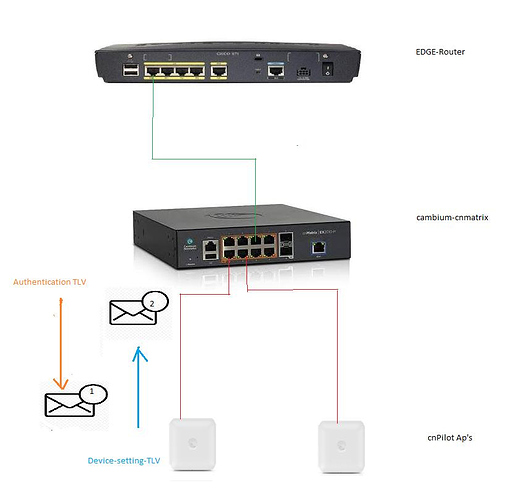 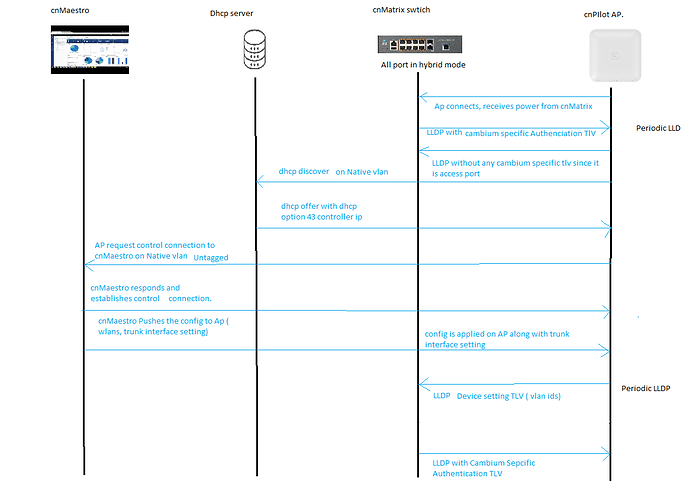 LLDP packet originated from cnPIlot AP. It has the device setting TLV1030×477 185 KB

By default, Auto-Attach policy is enabled by default on cnMatrix Switch.

LLDP is enabled by default on cnPilot AP.

To check the LLDP neighbors

To check the vlan’s learned from LLDP neighbors 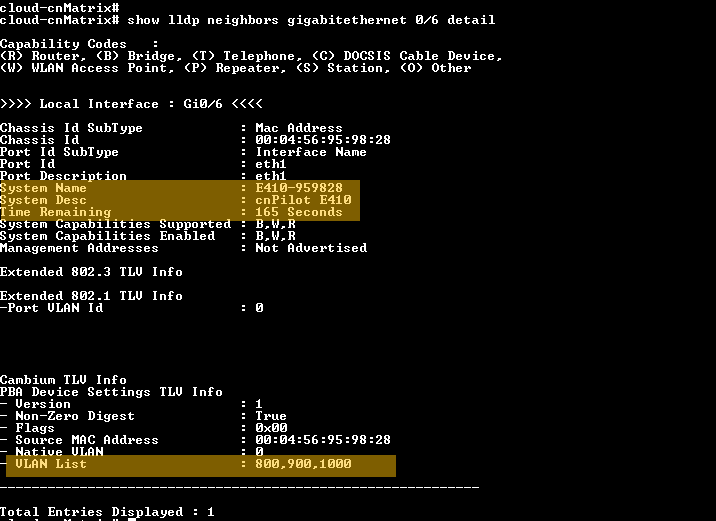 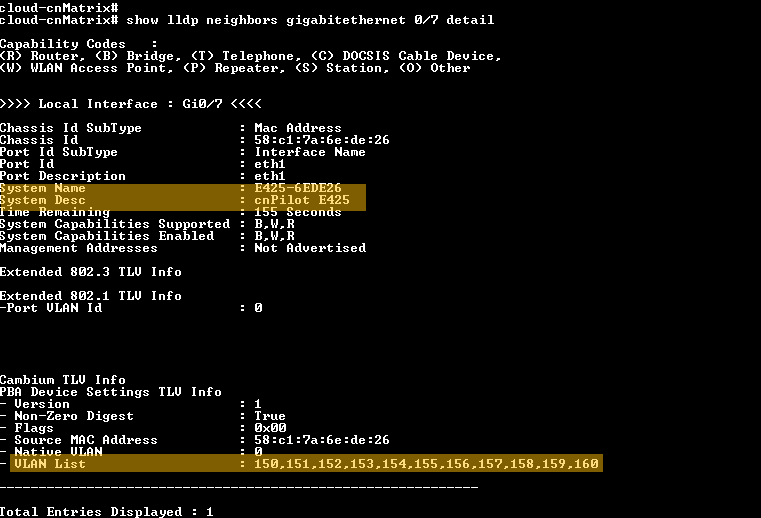 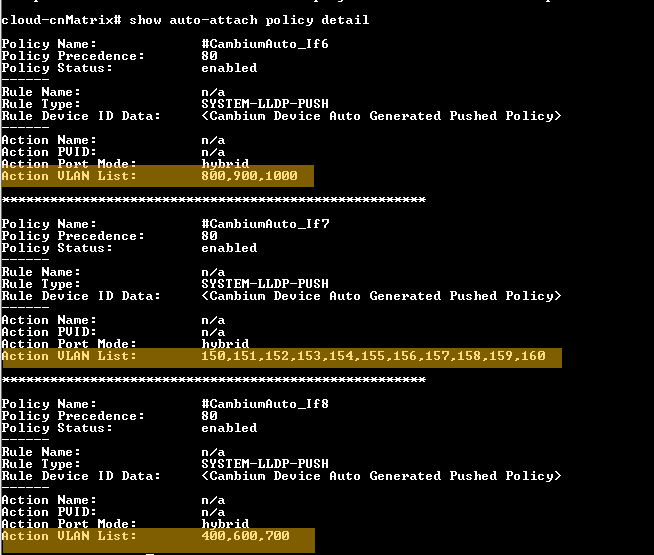 To view the status of TLV processed or Failed 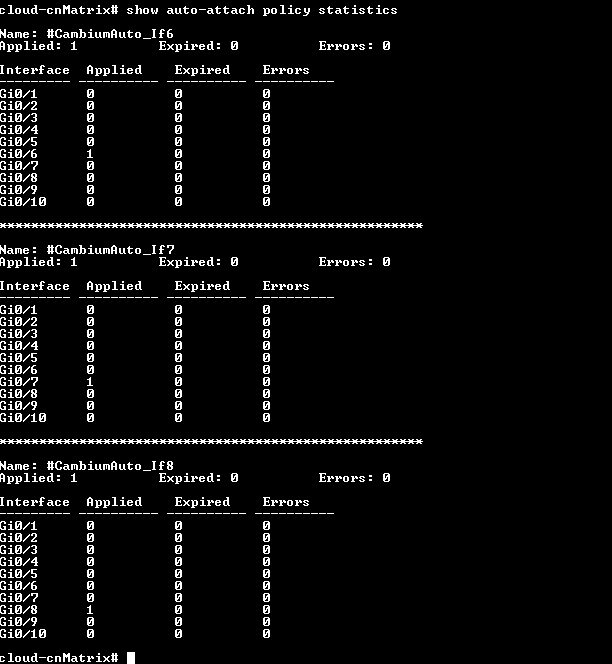 To view the LLDP counters globally 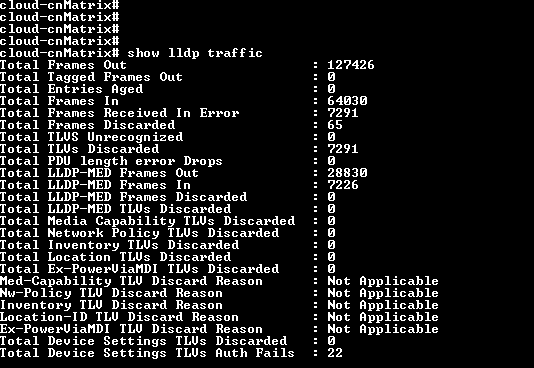 To change the Authentication key on cnMatrix and cnPIlot

If the user wants to change the default shared authentication key, then can use the below cli on cnMatrix and cnPilot . Ensure it is same on both the devices, else the authentication of lldp packet will fail.

This feature works between cnPilot AP and cnMatrix switches and enables zero touch deployment of cnPilot APs to be deployed with cnMatrix w.r.to VLAN configuration.