We have a customer on an R195W. They explained this morning that their WiFi devices all lose Internet connectivity with this router periodically. This replaced an R200 that was there previously, but couldn't meet their speed of their service.

We are losing this customer because of the performance of the R-Series routers. They are switching to another service, and do not have interest in troubleshooting this further for us.

Please, Cambium, there must be a way to provide a recommended configuration for each of the R-Series routers. Troubleshooting these things is getting tiresome. Reading the forums to find tweaks to avoid issues does not feel like these meet the price premium they have.

I have forwarded this to the support team and the product team.

I had the exact same issue, lost a customer and ill never get them back...cambium needs to address this issue.

It's been over 2 years, I don't think anything is going to change until a new hardware revision is made in house. I feel like there's both hardware and software issues with these routers.

Ray, this isnt something new and we have been asking for help with this for months. It needs to be brought up to PLM for immediate suppoort.

Release 4.7 is currently undergoing system test and is expected to be made available in a matter of weeks.  Release 4.7 addresses the disconnect issues many of you have been experiencing.   We will inform you as soon as the release is available.

Release 4.7 is currently undergoing system test and is expected to be made available in a matter of weeks.  Release 4.7 addresses the disconnect issues many of you have been experiencing.   We will inform you as soon as the release is available.

Does this fix the R195W only, or the entire R-Series lineup?

Has anyone seen or tried this suggestion to put up an IP access control list on the R195W ?

I do not have any of these units but I am looking to get some to test, was told about this issue from my distributor…and then found this article:

The Problem We have been experiencing a problem with our Cambium routers where they randomly drop and are unresponsive till a reboot. They’ll also stop handing out addresses on the LAN side. A reboot “fixes” the problem, until it does … Continue...

It is always a good idea to restrict access across WAN to only known hosts, hence the provided suggestion should be helpful in many cases.

These problems have continued and have not been resolved in any way by the newer firmware (tested most recently on 4.7.1-R4). We have been trying multiple configuration variations, but with limited success.

We have lost 3 more customers who claim WiFi problems as the reason.

Cambium, we standardized on the R-Series routers when they were C3-VoIP units. We are now noticing problems with R190V, R190W, and R195W routers. We have stuck with this for a long time, but are wearing thin. Please, what steps are being taken to provide us with standardized working configurations?

I’m preparing to switch to another platform. I would really prefer for the Cambium equipment to just work, but there has been such little progress here, I am having a hard time seeing a path forward.

[Further, the R195P was just released at a $120 price point! It isn’t AX or even Wave-2, and is already more expensive than the tried-and-true reputable competition. Is this the path forward to expect? This suggests when a Wave-2 or AX product is actually released, it will be even more expensive. Please, I’m ready to be convinced to stay. I want everything rolled right into cnMaestro like we have currently… but it has to work.]

What should I do? How do I get these to work?

Any update on this? The R195W has been much better than previous routers and 4.7.1-R4 is better but wifi still drops. Customers haven’t complained too much but some customers are noticing. I just installed a router for my parents and the family really beat the hell out of it over Thanksgiving and it failed in a very superb fashion. The wifi network would run fine, then drop, drop, stream fails, comes back, repeat. It might run great for another 20 minutes and crap again. This screams memory leak or maybe driver issue. It could also scream crap hardware. Calix has been waiting for me to get off the pot on this so maybe it’s time. I would rather stay with Cambium but this needs resolved immediately (like 2 weeks guys),

Can you drop me an email at ashutosh.datta[at]cambiumnetworks.com so that we can talk about this issue.

…Calix has been waiting for me to get off the pot on this so maybe it’s time. I would rather stay with Cambium but this needs resolved immediately (like 2 weeks guys),

Every day my list starts with “Order Calix gear”, and I keep putting it off hoping for a fantastic repair from Cambium… or a fantastic replacement, or something. I just got an R195P to test despite the really high price for a Wave 1 product. It has different internal hardware, but it had the same problems as the R190V and R195W. For one customer with regular problems, I just added a UniFi AP, and most of the problems went away.

We are experiencing same issue even after the latest update 4.7.1-R4. Very frustrating!

We were having issues with our R190W and our R195W before, but the R195W’s were the ones that were dropping from the memory leak (which 4.7.1-R4 has fixed for us). They still have issues with inconsistent speed, and one thing we’ve found to fix that is to manually set the DNS. They all pull the right IPs for DNS through DHCP, but for some reason, you still have to go manually type in the same exact IPs and set it manually. We’ve just made it a habit to do it on every one. Not sure if that would help you or not.

Would you be able to post a pic of what you are doing? Thanks! 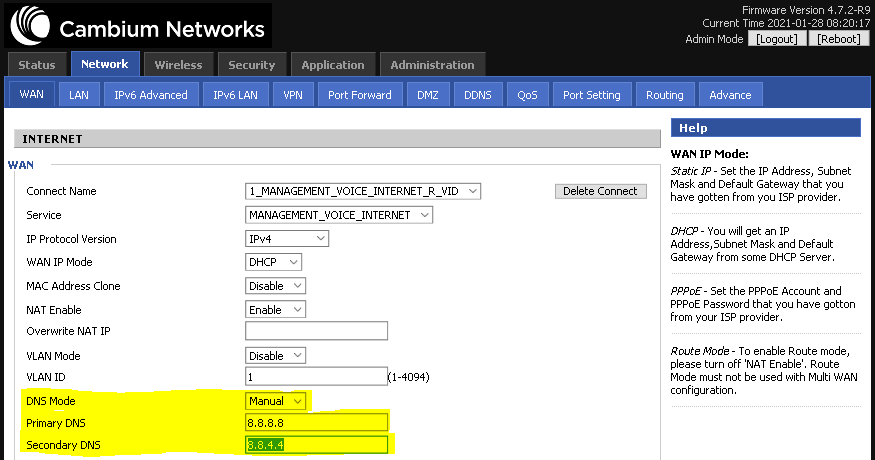 If it’s set to “Auto” it will show that it pulls our DNS IP through DHCP, but speeds can be slow for some reason. If we set them to the same IP’s manually, it appears to help get a consistent speed. Why? I have absolutely no idea, but it’s something we’ve been doing, and it seems to be helping.

Out of curiosity, are any of these problematic routers statically configured, or all DHCP WAN? I see that everytime DHCP renews, the LAN drops for a moment. I wonder if thats what kills the wireless?

We also went through a period where wireless would disappear, if we got into the unit GUI the radio would be diabled. Initially I attributed it to kids not wanting to do remote learning and somehow getting into the units. But then it happenned to a few old people with no kids. Dont recall the FW we were on, but it was the beginning of the school year 2020. Was odd seeing an actual config change.

All of ours are DHCP on the WAN. I have not tried static configurations. Our problems seem to hit certain customers hard, and others not as much or not at all. I have a test setup at my house so I can confirm testing the DNS change once I have issues.

If you have a customer that consistently has issues you could try extending their lease or configuring the WAN IP statically for a period to see if it resolves. Ive never been able to identify what it is about certain customers who experience the issue consistently and by the time its relayed to me theyve replaced the router with their own