Hello all.  OK, we are just finishing up a Browser Extension for ePMP which helps display some information that we've felt was needed in the ePMP GUI.

Basically, the ePMP GUI is great and it does display a lot of good data in the "Monitor -> Performance" screen - but for an administrator to try to watch the changing 'Total Download Kbit' counter and to try to figure out what those changing numbers mean in KBit per second in real-time, that's difficult or impossible to do.  Likewise, the packet retransmission counters, and the packet drop counters are good - but it's more useful to see those numbers divided into a percentage of total packets.

So - this is the standard 'Monitor -> Performance' display: 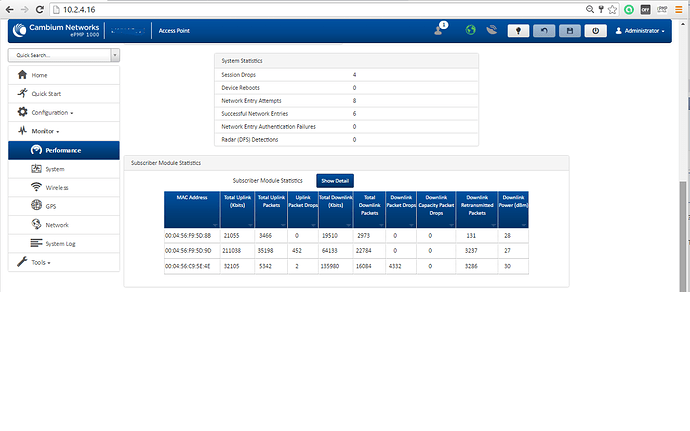 This is the display in Chrome with the ePMP Gui+ extension in place with the kbps display enabled... 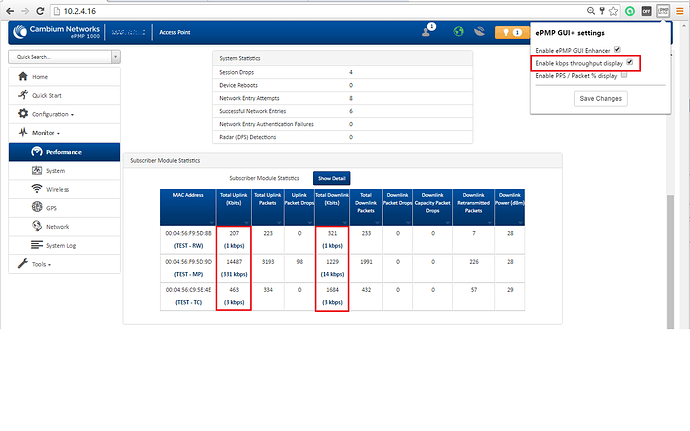 And this is the display with the ePMP GUI+ extension running, with both the kbps / pps / packet % enabled... 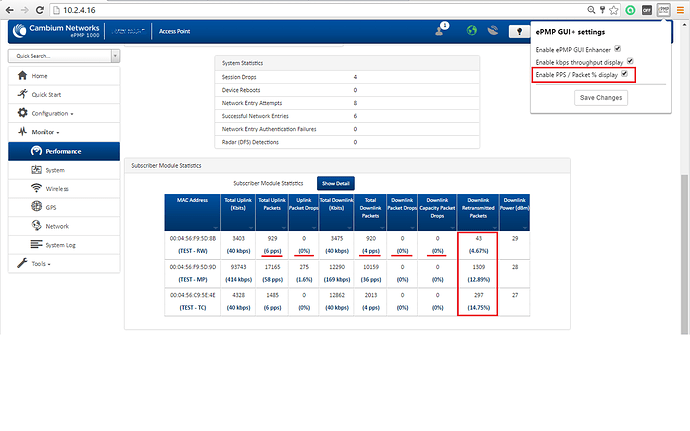 Great! Thank you for sharing this extension!

I hope Cambium will add this feature in the next releases!

Thank you ninedd! I just tried it out and it works pretty well! It seems to have problems if I set the UI refresh to less then 3s intervals.

Yes, it sometimes displays a 0 followed by a doubling of the numbers in the next interval. I think it's more accurate on a faster computer too.

But yea, I hired my university student son and another programmer dude to help write it and I think it's an awesome help to be able to know what's going on.

hats off to you sir, awesome!   If you are ever around st. louis give me a shout, beer is on me!

the retrans and error %% will save me so much time trouble shooting. thank you.

hats off to you sir, awesome!   If you are ever around st. louis give me a shout, beer is on me!

Right back at ya Chris.  Your advice and help and experience in these forums is very, very valuable to me and to everyone here.  :)  And I didn't do much of the programming myself - some, but mostly just paid other folks to do my evil bidding... So, if you're ever in Saskatchewan, give me a call - I'll buy you a beer!  BUT, that'd be a stong Canadian Beer.., if you can handle it?  LOL.

I'll sure give it a try!

Thank you for donating this essential tool!

You just bought the Programming Team some time ;)

Chris - La Fin du Monde.  Which literally translates into 'The End of the World' 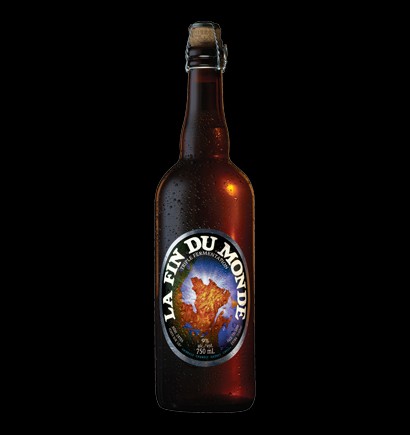 Thank you for donating this essential tool!

You just bought the Programing Team some time ;)

that beer, and your extention looks great!    and this AP needs a wider channel sunday night!

Yes - 60 MB down plus 13.5 Mbit up...  that's really plugging along!   And yes, I'm really pleased with the way this Browser Extension worked out - the programmers did a good job I think.

Same for packet loss or retransmission % - those are pretty big numbers to start scouring through.  I'm all about ''at a glance'' noticing problems before the client calls to complain and doing the % math only then.  This way, you can spot the problems as they are happening more easily.

SO many clients are streaming or 'cloud storaging' or doing something in the background and they don't know they are even doing it.  So when they call to say their Speedtest.net results are lower than expected, and when we can see that they've got data flowing up/down pinned at their QOS numbers right while we are talkign to t

This is great!  Thank you so much for this plugin!  I sure appreciate it!

This is great!  Thank you so much for this plugin!  I sure appreciate it!

Thank you for doing this. I appreciate it.

it's SO useful - even for simple things...  the other day when I wanted to change a customers QOS plan they are on - and I can SEE if they are actually using their internet at the moment or not.  I could see that he wasn't using it, so it's a conventient time to make a config change that won't disrupt him much, and I can go ahead. :)

Just to let everyone know...  I am aware that the ePMP GUI + Browser Extension for Chrome breaks with the V3.x firmware, and I'm already working on a fixed version that should be ready in a few days.

Great to hear a v3.0 fix is on the way - this is a super useful extension!

Hi. OK, I’ll get it compilef and uploaded.

I wasn’t certain if anyone used it… but I’ll try to get that done over the weekend.

@ninedd wrote:
Hi. OK, I'll get it compilef and uploaded. :) I wasn't certain if anyone used it... but I'll try to get that done over the weekend. :)

I can assure you that there are MANY customers using this extension and are finding it very useful. :) Thanks for doing this and contributing to the community.