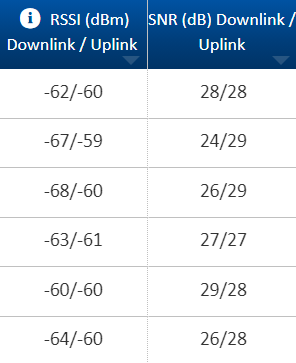 The weird thing is that 5 out of the 6 of the SMs’ all have -75 for Ch1 but Ch0 matches the downlink rssi on the AP wireless tab. Do each of the SMs need a realignment? Thanks

Anyone? ever seen this happen before?

What firmware version is running on the SM’s in question and the AP? It is possible that each needs a realignment, but I would think its something else as your other chain levels are good.

I would also double check that AP’s antenna cables IF that is the only AP doing this. Having the cables swapped can cause interesting issues like this.

Thank you for the reply. I had swapped radios and im pretty sure I didnt mess up reconnecting but I will double check them.

Its easy to do, I have done it. changing a radio is at the best of time a complex procedure, now add cold!

Yes exactly, nice putting everything together on the ground but yes such a pain up on the tower lol… thanks again… I have seen some posts on the forum that the second chain being off is a realignment issue but since I did swap the radio and I noticed the chain issue so its pointing toward cables.

a loose cable or a damaged connector or even an over tightened connector can cause RF loss.
There is too much that can cause similar issues.

connector tightness is hard to teach over forums, but is best described as finger tight plus a little to ensure it wont come loose. I use 3 to 5 inch pounds on connectors smaller than half inch diameter.

damage with the RP-SMA is fairly hard to do but not impossible, check the center pin and receiver for obvious damage.

Will do… I connected them as you described but will double check.

Also - you can’t assume that ‘CH0’ and ‘CH1’ in the software (eg in eAlign) are necessarily related to CH0 and CH1 on the radios when you’re trying to diagnose what the issue with chain inbalances are. I reported in April 2020 that the Chains are crossed from the hardware to the software. There was a couple jokes made about it, but nothing more than that.

With much of the gear, it's labeled H and V on the connectors.  With the Force300c - they are labeled CH0 and CH1 on them.  So, today we're aiming in another PTP link, and we are getting wonky eAlign results, so I ask the tower guy to make sure the pigtails are tight.  I then ask him to remove one (just to see what happens) and this is what we see in eAlign vs the physical connections. We physically disconneced CH1 Pigtail - and in eAlign Ch0 (and extCh0) go into -90's [eALIGN_CHAIN_0_LOW_WITH…

Okay, thank you… the issue is I have one SM out of six that has no chain imbalance issue but the other 5 are ALL at -75 for Ch1… so is this a alignment issue… Im not too sure, could it be the RP cables, sounds more likely since my chains were not out of whack before I swapped the radio. Thanks!

Also - as per my post on the chains… when you do climb and start looking at cables/pigtails DO NOT ASSUME THAT CH1 is CH1. You’ll have to disconnect each pigtail, and do the “process of elimination” to be certain where the issue is.

I encourage you to test for yourself.

Cambium and others will say that the Chains don’t really matter (and they kinda don’t… connect your ePMP3000L CH0/CH1 to any dual pole or dual-slant antenna, in any order, and it doesn’t matter if they are crossed or not. The radios will figure it out, so that part doesn’t technically matter. That part is kinda accurate.)

BUT - were it does matter is that it’s important to get them correct, so when we were looking for what was wrong with CH0 signals (and we assumed that meant a problem with the CH0 connector or the CH0 pigtail or the CH0 feed on the sector) and it turns out the CH1 connector on the AP, is displayed as CH0 signals.

No one followed up when I reported it – just a couple jokes made and that was that. When I test and report, I’m not doing it just to complain, or to be grumpy about something… I’m actually doing it to help make things better. Anyway, I would encourage you test yourself (disconnect the pigtails one at a time and see what results you get) and report your findings / questions to Cambium as well.

Sounds goo, I will thank you. So what was your resolution?

I have no resolution. I can’t make the Firmware display match up with the actual correct hardware connectors.

Polarity of the cables does have an affect on the signal chains at the SM but this is more important for back to back APs. Though it is more likely that the radio is out of alignment slightly. I am focusing on the cables as a good possibility as everything was working properly prior to a radio swap.

If you’re replying to me – for my 2c, I think it’s pretty reasonable that people will expect that if the connectors are labeled CH0 and CH1, that they expect those to match what eAlign displays as CH0 and CH1

Ninedd,
It was kind of to both but more for digitalman2020’s sanity.

For the record, the ports were labled h and v at one time. Not sure why they changed, but they did.

To be honest as long as both ends are the same then it wont matter which is which. Better, more intuitive markings like on antennas would be helpfull though.

Do both ends even have to be the same, other than for troubleshooting as ninedd points out ? I agree that it seems like it should matter but I’m pretty sure I remember Cambium saying it didn’t matter. I asked several years ago because I had been told Ubiquiti antennas were backwards from ePMP and that you needed to cross the pigtails when using ePMP on a Ubiquiti antenna and we were doing a lot of ePMP on Ubiquiti antennas and Elevated Ubiquiti radios at the time (also it seemed you would have to do that on almost any antenna because at the time most/all 3rd party antennas were the same as Ubiquiti as far as I knew) but pretty sure when I asked Cambium about this I was told it didn’t matter , the radios either didn’t care or could figure it out.