I do not know if this is the right place to ask but I have a problem.
I plan to use 18 AP E501s powered by cnMatrix EX2028-P.
I also want to power up to 5-10 cameras connected to AP`s.
Is this possible or should I use POE injection to power the AP?

Hello, here is some information on the POE capabilities of our cnMatrix switches.  I've also attached some reference information.  It is possible to do what you are trying to do, but the consideration is overall power budget.  My numbers assume that you are not using the POE out from the E501s.  Also, on the EX2028P, there are only 24 POE enabled ports, so you will be limited to 6 cameras.  The other 4 are uplink ports.

802.3af class 3 also has a max of 12.95W http://www.veracityglobal.com/resources/articles-and-white-papers/poe-explained-part-2.aspx

• PoE (Power Over Ethernet)is used to power various devices connected directly to the switch via the copper ports (like Wireless Access Points, IP Cameras, VoIP Phones etc) over standard Ethernet CAT5 or CAT6 cables
• It supports 802.3afand 802.3atstandards, offering thus the possibility to deliver up to 30W per port
• The PoE power budget, or available power, depends on the model of the switch:
•  400W for EX2028-P
• 100W for EX2010-P
• PoE is enabled by default, both globally and per-port
• Devices will be powered-up regardless of the administrative state of the port, i.e. PoEworks even if the port is in shutdown state
• PoE configurations can be done only from the CLI for the moment
• PoE priority can be configured on a per-port basis. Available options are: critical, high and low. Low is also the default
• When power budget is exceeded, ports will be denied power based on their priority. If the decision has to be made between ports with equal priority, the biggest port number will be denied power

Thanks for the comprehensive answer. Sorry for misunderstanding but my idea is to powered up the cameras from e501 POE out.

I didn`t know about PoE priority options in EX2028-P.

Can you give some guides or links how to configure cameras and APs in different subnets?

This community is great. It help us a lot.

Thanks, and no problem.  That's what we are here for.

If you use the POE out on the E501S, it will require POE+ (802.3at) to power on.  Assuming worst case scenario, that would be 26W drawn per E501S that has POE out enabled.  I seem to have attached an older spec sheet last time, so I've attached the newest.

I would configure priority for the E501S's with cameras to ensure proper POE+ functionality.

These links should help with the VLANs.  Essentially you would configure the E501S Ethernet ports with the appropriate VLAN information.  Most likely this would be a single access port VLAN for the ETH2 port (to camera) and then a trunk port for the ETH1 port (main Ethernet), with the management, camera, and any other VLANs configured in the membership table.  Attached is an example from my E-Series.

Yesterday i was on meeting with our future client and discuss complete solution.
Now I wait to approve it and then to start the project.

So if I have a future problems, can I count on your support?

Thank you once again and have a nice weekend!

Do I need to connect cnMatrix to mgmt port???

It's a problem because this port is not from the same network as AP`s.

How to make cnMatrix mgmt port to be on the same network?

Sorry for the question but I can`t find any procedure how to onboard all device.

To onboard cnMatrix on on-premise cnMaestro, you can use one of the following methods:

1) Manually configure the on-premise URL via CLI commands as shown below:

Note: In upcoming 2.1 release this can also be done via Web management.

2) Configure DHCP options 43 or 15 in the DHCP server. The DHCP options are used by cnMatrix to derive URL of the on-premise. This method is valid only if cnMatrix has obtained its IP address via DHCP.

cnMatrix's default VLAN 1 has all front panel ports (excluding OOB port) as members. VLAN 1 by default uses DHCP method to obtain its IP address. If you connect one of these ports to your network where DHCP server is reachable, VLAN 1 can obtain its IP address, default gateway, and options 43 or 15 from the DHCP server. Once on-premise IP address is determined, cnMatrix will automatically connect to cnMaestro. You need to approve the cnMatrix in cnMaestro.

If the cnPilots are connected to cnMatrix ports (also in VLAN 1), they will get their IP addresses from the same DHCP server and will connect to the on-premise in the same manner.

If you need further clarification, I can be reached at tng100@cambiumnetworks.com.

We installed one switch with 9 Ap`s but I have a question. Why on part of the Ap`s the ports are connected as 1 gbps and at the others 100 mbps. All are configured as AUTO?

Please type the CLI command 'show interfaces status' to confirm all the ports are configured for auto-negotiation. Please share the output.

For the port that is connected with 100mbps, force the command to 1gbps as shown below. This may indicate whether the auto-negotiation was successful between the AP-510 and cnMatrix.

So you suggest me to do this with terminal?

Because I already try this with UI and after I change last port the switch go offline.

Please also confirm autonegotiate is enabled on all the APs.

I add new E501s AP`s but  on the 3 of them can`t get ip from DHCP server. On the switch only orange LED glow.

I think your issue might be that you need to enable DHCP on the Switch, here are the commands: 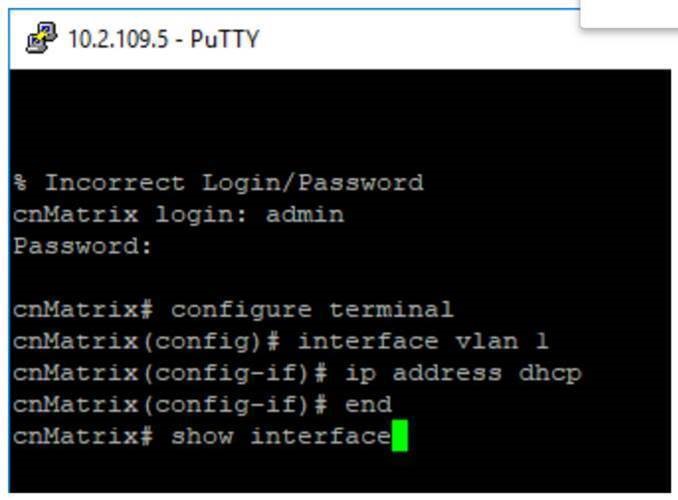 If the E501 is getting power from the switch both LEDs should be on.

If the link LED is off but the PoE LED is on, please make sure port is administrave enabled.

Thank you all.
In fact, the bigger problems was the cables and RJ45 connectors we used. But what surprised me the most was that one of the AP 501s had a connection port problem (one of the pins was damaged). It was getting power but no data. I tried everything before checking the AP connector itself. I don't know how it happened, but the first pair of cable didn't make contact until we repaired the AP's pins. Thank you for your help. It's nice to know that you can count on someone when needed.